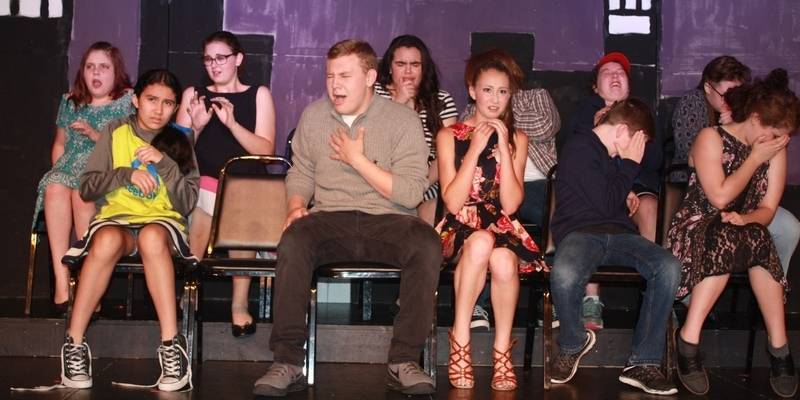 We all remember that awkward stage of adolescence and becoming a teenager. The weird changes, and weird videos in Health class reminding us of those weird changes. The perpetual desire to be liked. And of course, the crushes.

Now add to that craziness moving across the country to a podunk Midwestern town, let alone a small Indiana town, and you have the premise for Jason Robert Brown’s 13: The Musical. Filled with humorous, awkward moments about first kisses, middle school social structures, and overbearing parents, 13 is a musical designed specifically for a teenage cast and crew making it the perfect fit for Twin City Theatre Company’s annual Stars of Tomorrow student-run production.

Unlike many student-run productions, Twin City Theatre’s production of 13 is top to bottom students. No adult directors or choreographers. No adult stage managers. No adult band directors. And I very much loved that. Reserving all roles in the show and positions in the crew for students offers opportunities for remarkable and formative theatre experiences.

Although the show was not without hiccups — hiccups, however, that are easily fixed as the students gain more and more theatrical experience — the cast and crew’s youth played well to the show’s theme and offered several standout performances.

Nick Wilson, as Evan Goldman, was a bit of an enigma for me. On the one hand I, without a doubt, enjoyed his performance and the talent he brought to the show. Wilson is clearly no stranger to the stage. And his vocal range and tone — even the imperfections added depth to a character turning 13 — worked quite well with Brown’s musical stylings.

On the other hand, I found it difficult to suspend my disbelief watching Wilson play the role of Evan. While butting heads with the cool, villainous star quarterback Brett (Joe Salava), or singing about being geeky and uncool, all I could think was that Wilson looks more like Brett, the tough bully of a star quarterback. And Salava looked more like the awkward, geeky Evan. But that is nitpicking on my part. Wilson is talented, and very much belongs in a show produced by “Stars of Tomorrow”.

Langston Span brought an endearing quality to a character comprised of several cliches. Span’s large, bright smile and cheery demeanor lit up the stage every moment he was on it. His presence on stage made me smile just as big, and I looked forward to him returning when offstage.

Madelyn Childress played Lucy, the typical gossiping mean girl, with finesse and charm. Childress hit all the notes of the typical mean girl with strength, but also brought her own flare to the role. Seems to me that there is more under the surface of her Lucy than just an undying desire for popularity.

Of all the performances, though, was Jordyn Warhover as Patrice. Warhover took the typical nerdy, ignored, pining female cliche and turned it on its head. 13 may have been Evan’s story, but Warhover’s Patrice was the hero. She brought a strength, toughness, and wit to Patrice that makes you side with her more often than not. With a voice that never ceased to grab my attention, and a natural ease on stage I look forward to seeing her in more productions.

With that said, my main contentions are with the script itself. I found myself squirming in response to problematic tropes. Girls pushed into physical acts before deciding whether they truly want to, and viewed as objects of a boy’s desire. This happens even with the token disabled character whose condition is used as a tool by the main character to get what he wants. Brown tries far too hard to pass these tropes as awkward adolescent moments and childish jokes. And even worse, there is no push back against these tropes. No commentary on why they are wrong. No characters questioning whether the actions of others are actually okay. They all just go with the flow. But I suppose, as they say, art and life tend to imitate each other.

Even with the flaws, which I understand cannot be fixed by the cast and crew, Twin City Theatre’s production of 13: The Musical is an enjoyable show that, save for a few moments, is a fun time for the entire family. Most importantly, as I will always say about student production. Go in droves. Not just to support art, but to support youth that dream big. Youth that have loved the stage for many years, or are just forming a relationship with theater. Support and commend teenagers for taking on a task both tiring and trepidatious. Support them because you never know the impact that support will have on them.