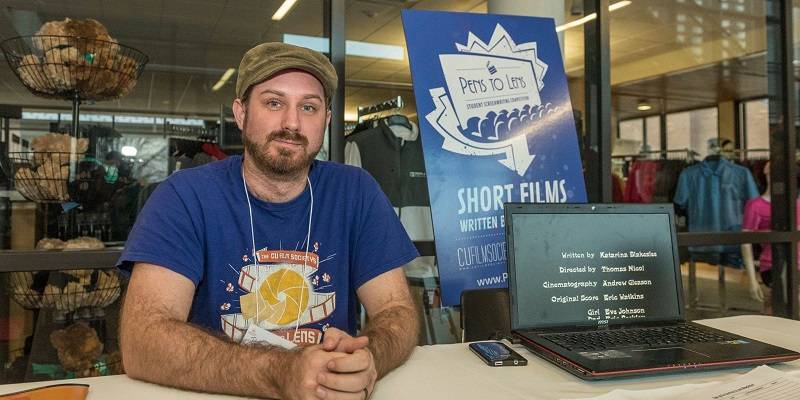 First off, that picture’s not the gala — it’s Thomas Nicol spreading the word. Secondly, I won’t apologize for the boring title. Regular readers of SP have stopped expecting any article titles to actually hint at the content, and most days the puns or allegories are my never-ending jam. But as I sat here thinking about the fact that this is the 5th annual Pens to Lens Gala, I could not bring myself to detract from that amazing news. For five years, a local filmmaking nonprofit has encouraged our local children to write, explore, act, express, and most of all celebrate all of the above. For five years, scripts written on notebook paper or dictated to familial typists have been turned into professional-quality films at no cost to the kids involved. For five years, we the audience have been treated to gorgeous interpretations of bizarre, hilarious, surreal, and heartbreaking films created by our peers and our children.

How do you pun that?

This is my third year straight writing about this to-do at the Virginia Theatre. I’m not going to lie, while I absolutely hate the strain of lacking writers during in the summer, it thrills me to know that I’m the one who will have to write the preview & review for Pens to Lens. Watch out – I might even dress up this year.

Pens to Lens social media game has been tight this year (go vote in this poll, see if you can choose only one answer) so I hope you know a little about it, or surmised some from the

paragraph above. Local filmmakers from CU Film Society create professional films from scripts written by students in Central Illinois. The choosing is complicated and algorithmy, but fair. Movie posters are created by CUDO (another local non-profit) and there are additional writing awards given out (usually created by a local makerspace).

As part of the Filmmaking Competition, local students can

submit student-made films. Adults and advisors are allowed to help in some capacity, but generally these films are written by, acted in, filmed and directed by students. This facet of the gala came later, with the first awards being given during the 3rd year of Pens to Lens, but it has been growing in popularity quickly. Dora Valkanova, one of the Filmmaking Competition organizers, told me,

“All Pens to Lens filmmakers who take part in bringing kids’ stories to the screen are very passionate about filmmaking and eager to share that passion with students. Luckily, as we doubled our efforts in reaching out to families, teachers and organizations focused on children, our message about sharing the love of filmmaking fell on sympathetic ears. From then on, word about the competition keeps spreading while we also continue to seek new channels for reaching children in the community.”

And I can attest: one thing you are guaranteed to see at the Gala is passion. Entire casts and production companies will pose together, smiling, laughing and crying. This event intersects several disciplines of artist, and they will all be there to show off their work, support the work of their friends, and bolster the dreams of children who create.

What to look for at this year’s gala at the Virginia Theatre:

This is always the most fun of the day. There is another chance during dinner break, but this first wave has the most people and is a great chance to see and meet all the artists – amateur and professional – involved. This year, film critics Matt Fagerholm from rogerebert.com and Michael Phillips from the Chicago Tribune will be attending, so you might even see someone famous.

This year’s afternoon host is Cara Maurizi, who told me she has a brand-new dress and a half-new song. As a music and drama teacher and improv comedian, last year Ms. Maurizi surprised all of us with a “Pens to Lens” theme song which incorporated all the films we saw in the afternoon. Writing awards for K-8 students will be given at this showing.

Student Filmmaking Competition Films: ADVENTURES OF FILMMAKING by Max Libman; POWER OF COFFEE by D.J. Wang; A SPACE TRIP by Rowan Fisher. Libman is a past-participant in Pens to Lens (you’ll remember him best as Potato Boy). D.J. Wang is a newcomer to P2L but not to creativity — SP profiled him last year before he played piano at Carnegie Hall as a 1st grader. And Rowan Fisher returns for his second year as a Filmmaking Competition director, which is pretty impressive for a 3rd grader.

[Editor’s note: an earlier edition of this article omitted these younger students’ films. They will be screened and no winners have been announced at this time. All awards will be presented during the Gala.]

There’s usually about 90 minutes to get your chow on, and you can re-live the Ebertfest dash by running to a local spot, but food truck Betsy’s Bistro (formerly Hendrick House) will be on Park Street so you won’t have to eat and run.

The emcee for this portion of the gala will be Mallory Morris, who is an administrator at both Edison Middle School and One People’s Summer Arts Camp (yet another amazing arts-related non-profit). Ms. Morris has plenty of charisma, but I do not know if she has her own song — we’ll have to find out Saturday. Writing awards for High School students will be given at this showing.

Student Filmmaking Competition Film: RED LETTER PSYCHICS: THE GHOST MASK by Parker Evans, a long-time participant in Pens to Lens as both writer and actor, who also has another film in the Screenwriting Competition.

[Editor’s note — an earlier edition of this article announced Parker Evans as “the winner” of the Filmmaking Competition, but that was in error. His film will be screened but the winners will not be announced until the Gala. Additional entries will be shown at the 2pm screening.]

And here’s the lineup:

Photos and synopses provided by Pens To Lens. Editor’s comments in italics.

All films appropriate for all ages

A boy with an unusual problem feels like he’s all alone.

Stop giggling, this was written by a kid.

Classic superhero + 2 sidekicks vs. evil villain with pencil-thin mustache story. This might be my favorite, but I am biased.

A mad scientist makes a double machine with surprising results. This might also be my favorite, but I am still biased.

THE LUCHADOR by Luca Villaseñor (grade 7), directed by Andrew Stengele

Rosie quests into the forest to find a magical wish-granting unicorn. Unicorns are actually my favorite; if there’s a real unicorn, this will be my favorite.

THE PUPPY TRIALS by Claire Hartman (grade 3), directed by Thomas and Becky Nicol

Shelter puppies learn lessons on how to behave from an older dog. Clearly by the creators of Moose Emergency, another past P2L favorite of mine.

THE WEREBANANA by Henry DeVivo, directed by Michael Bach

No contest – this IS my favorite title. Film favorite? TBD.

ADVENTURES OF FILMMAKING by Max Libman

POWER OF COFFEE by D.J. Wang

Seriously, kid, never stop being good at everything. Learn from those older guys like Parker Evans, though.

A SPACE TRIP by Rowan Fisher.

Directing two films before out of third grade? Amazing.

Some films may contain content appropriate for age 13 and up

A crime drama about two people debating what to do next.

DANIEL by Scott A. Best (grade 10), directed by John Isberg

A man is haunted by a recurring dark figure. Will probably have amazing music. Just sayin.

GNARLED ALLIANCE: A TALE OF BROTHERS by Bridget Spillman, directed by Thomas Polk

Probably does not star Pauly Shore.

How could anything possibly go wrong with the first successful artificial human?

I KNOW YOU by Madeline De Coste (grade 9), directed by Becky Nicol and Nadine Gleason

While in their secret identities (aka normal humans), a superhero and her nemesis get trapped in an elevator together. Very excited to see this one. Might be my new favorite.

Cubs fans? Any Cubs fans around? I don’t know anything about this, but…

Everything is opposite throughout a man’s morning routine. Ok, sorry, actually if history is a predictor of the future, this one will probably be my real favorite.

This one is absolutely my least favorite title. But out of solidarity.

Seriously, kid, never stop being good at everything. But watch out for that 2nd grade piano prodigy screenwriter ballerina nipping at your heels.

Alright, well, if you’ve made it this far, I assume I will see you at the Virginia on Saturday. I’d say bring a guest or two, but tickets sell fast.