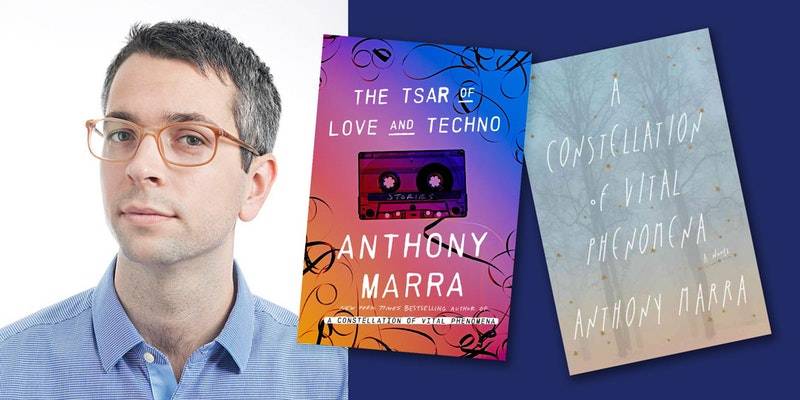 Friday evening, before much of Pygmalion really gets rolling downtown, PygLit will host its first of two events at the Champaign Public Library. A Pushcart prize-winning author and the Jones Lecturer in Fiction at Stanford, Anthony Marra will be speaking about his two published novels: A Constellation of Vital Phenomena, and The Tsar of Love and Techno. Since both the novel and short story collection take place in different areas of the former Soviet Union, it should be an enlightening evening about an area of the world that has been important to recent American political discourse. (I was going to say “at the forefront”, but I think North Korea has edged Russia out in the past couple days.) Still, Marra has a great sense of humor, as you can read in the interview below, and assures me it will be a fun and entertaining evening, as well.

Smile Politely: Author events usually follow a certain format —chat, read, Q&A, sign— but I haven’t been able to get a good feel for your style of presentation from my quick research. Care to share?

Anthony Marra: I’ll only read for about 1/3 of the time; I find that telling the bizarre anecdotes that ended up leading to my stories and books often bring the stories to life in a way that they otherwise wouldn’t be. I like to think of it, not quite like stand-up comedy, but almost. I definitely like to put on a performance.

SP: Excellent, I’m also wondering because this is a music festival, and music figures so heavily into especially your latest book (check out the Tsar of Love & Techno playlist), if there is any musical portion to the evening?

Marra: I hadn’t actually thought of that. I could come out like a boxer to the playlist.

SP: I’ve read your theory on mixtapes, and that this book is like a literary mixtape where each story builds toward a bigger narrative. But I want to call shenanigans on your claim that you made mixtapes for high school crushes: by my calculations, you should have been in high school during 1999, 2000?

SP: So what were you doing with cassette tapes, boyo? I’m a late adopter and even I had a CD burner by then. Weren’t you making mix discs?

Marra: No, really? That was before Spotify or any of that stuff, right?*  I don’t think I had a computer with a CD-R until I was in in college, and external drives were expensive, if I remember right, which, to be honest, I rarely do.  In any event, I’ve got drawers of these tapes in my childhood bedroom. My mom can provide them as evidence.

[*Editor’s note: in fact, it was the same year as the big Napster lawsuit, but I remember that bc I’m old.]

SP: Alright, I can give you the expensive angle, I’ll allow it. So much for my hard-hitting exposé.

Earlier this year, you got to interview George Saunders as part of LAPL’s Aloud series, what was it like being an author of short stories, interviewing another renowned short story author? How did your two short-story brains collide?

Marra: Well, it was an incredible honor. I feel like George Saunders is the contemporary equivalent to Mark Twain, a very American humorist who captures these marginalized voices in a way that is really spellbinding. He’s a hero of mine. In his work, there’s this incredible humor but also this incredible humanity, kindness, and this sense of grace in nearly everything he writes. I often think that writers put the best of themselves into their work. I know that in my case, the best things I’ve written are wiser than I am, and smarter than I am, and kinder than I am. It was such a treat to see that in person, George Saunders is every bit as wise, and funny, and humane as the best of his stories.

SP: I had to cut down a lot of my interview with him, but I feel I had a similar experience. I was amazed, like “he can’t be like this all the time.”

Since you were talking about humor, I’ve read that you think of yourself as “a comic writer who happens to write tragedies”. It really struck me that you’ve said humor can come from pain and heartbreak, and you just mentioned Mark Twain, who has famously said that a lot of humor comes from a place of anger. Just now you observed that George Saunders’ humor has so much kindness and grace within it. What do you think makes us, as people, need to laugh from every strong emotion?

Marra: What a beautiful question. For me, I think it’s partially my own way of seeing the world. I think that the world that we live in is fundamentally an absurd and ridiculous place in which a joke is the only way to make logical sense of it.

My two books are set in the former Soviet Union, and within that sphere humor exists as both a way to ameliorate and resist misfortune. I was struck when I was traveling through Chechnya –one of the most tragedy-ridden places on Earth—simply hearing the kinds of jokes people would say, just how sharp the sense of humor people there have. Often they would pinpoint the one thing you were most afraid of, and then they would tease you mercilessly for it**. It does become a way of whistling past the graveyard, laughing at what otherwise would make you cry, but it also becomes this fierce means of resisting what would overwhelm you.

Comedy is often seen as the lesser literary form, the clownish step-brother to drama, when in fact I think a joke can be a deadly serious thing, and a deeply moral and ethical way of trying to look at the world that we live in.

SP: Which brings up your travels in Chechnya and the vast amounts of research you did. You’ve said that the minor details of life – such as the surgeon using dental floss when he ran out of resources – are the things you’ve built your stories around. As I’ve spoken with people who’ve read more of your work than I have, a common observation has been that you have such an amazing sense of not only the minutiae of people’s lives, but also how those regions fit together in the larger scope of Eastern European history. Can you talk about how you achieved that level of intimacy in your writing?

Marra: I think that small little granular details are the building blocks of any good fiction. Fiction thrives on specificity and particularity. When I teach, I tell my students that a good story is merely an accretion of specific observations. In terms of trying to create this world in which I am very much a foreigner, I was drawn toward those details, the almost throwaway observations that struck me as distilling some of its absurdity and horror, but also its precarious beauty and possibility.

In terms of the dental floss stitches, I was reading an interview with a doctor who was working in Chechnya at the time, and I later got to become friends with him.

More generally, Russia has always been a place that has fascinated me. I studied in Russia in college, and have gone back numerous times on research trips. Life in the former USSR is experienced on a much larger and tumultuous scale than we might be accustomed to in America—in terms of climate, of politics, the entire sweep of 20th and 21st century history. I wanted to write about life within these social and political extremes, to use fiction as a means of introducing readers to a part of the world that, though perhaps distant and unfamiliar, has had and continues to have a profound influence on the world stage. That ended up largely informing my depictions of Chechnya in my first book and northern Russia in my second book.

SP: To ping back to music briefly, since this is a music and lit fest, you’re on record as having listened to a lot of Tchaikovsky while writing Tsar and Constellations. Is there anything in particular you’ve been listening to for inspiration for the book you’re working on right now – I’ve heard it’s historical fiction about L.A. during the 1940s?

Marra: I absolutely have. It’s a lot of big band jazz: Count Basie, Benny Goodman, the people who would have been on the radio at the time. The novel is also set in Italy, which had a Fascist law requiring the Italianization of foreign names. For example, Louis Armstrong’s became Luigi Braccioforte, which is a literal translation – “arm-strong”. Benny Goodman was changed to Benito Buonuomo.

SP: Any chance we’ll hear anything from the work in progress, or will you only read from your published books?

Marra: It will all be from published works, probably from Tsar of Love & Techno, which was published about two years ago, before the election.

SP: Ok, since you brought up the election, I will take the chance to ask the political question that flashed across my mind while you were talking earlier. When you were talking about humor and resistance, I stifled the reflex to ask if you think it’s ok to make fun of Trump, as a form of resistance.

Marra:  I think of course it’s okay to make fun of Trump, he does most of that work himself. It certainly doesn’t substitute for calling your representatives or marching in the streets, but I think these type of strong-man authoritarian types rely on the notion of their own imperviousness and strength. There’s nothing that makes you second-guess someone’s strength like seeing them slip on a banana peel or getting a pie in the face. I do think that while we shouldn’t think that humor is going to save the nation, it is a very effective rhetorical way of pointing out hypocrisy and galvanizing resistance.

SP: It’s interesting the way people get polarized over that, claiming that making fun of him just gives his supporters more reason to believe they’re victims, and increases their power.

Marra: Just thinking back to the [G. W.] Bush administration, Stephen Colbert and John Stewart were much more effective and pointing out the excesses and idiocies of that administration than were the prime-time network news anchors, because they were availing themselves of the power of comedy.

Anthony Marra’s PygLit event will begin at 6:30 p.m. at Champaign Public Library on Friday, September 22nd. Like all Pygmalion Literature Festival events, it is free, but the library does ask you to make a reservation so they can estimate attendance. The author will speak, read from his most recent work, answer questions, and a book signing will follow.