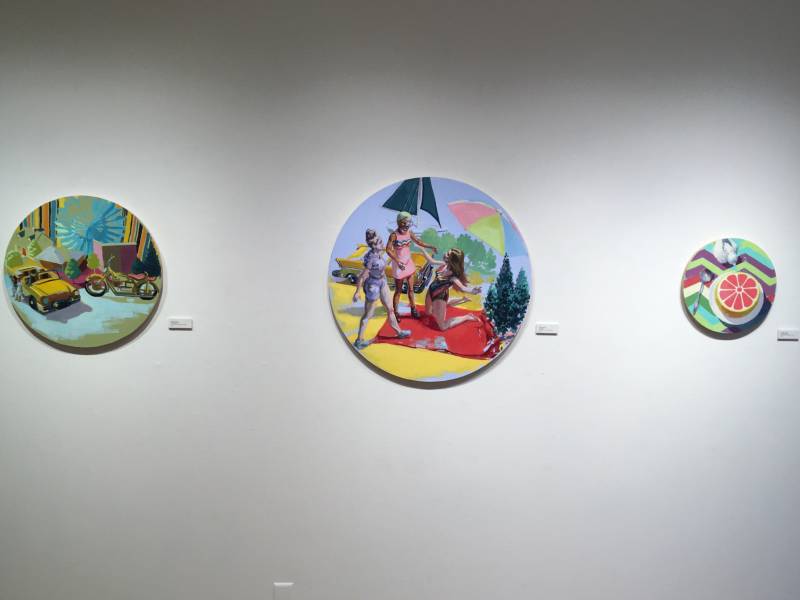 Giertz Gallery at Parkland College is currently exhibiting a collection, “Cover the Waterfront,” by artist Teresa Dunn. This exhibition will continue through November 3rd. Dunn, currently an associate professor of painting at Michigan State University, was originally raised in Southern Illinois.

This exhibition features 20 distinct works created between 2017 and 2018: 17 are composed of oil and Flashe (a vinyl-based paint), three are graphite. Each piece is affixed to a circular panel. A quote rests on the wall, Teresa Dunn speaking of the pieces:

Islands are simultaneously protected and isolated by the waters that surround them. These circular paintings are like miniature islands that encompass the life of my invented female protagonist and her small world. The circle, saturated color, and pattern allow me to explore metaphors for isolation and belonging, boundaries and openness, hope and hopelessness, home and homeland. The alternative constructed reality is observed from numerous points of reference including the protagonist, her cohabitants, an omniscient voyeur, and the viewer. My protagonist occupies a space that is simultaneously somewhere and nowhere. She exists between multiple and contradictory, realities. Expansive waters separate and connect here from there, yesterday from tomorrow, and a woman and her island from the moon.

The islands of color against the stark white walls typical of an art gallery draw the visitor around the room. Though each piece is significant on its own, as stated by the artist, they together compose a longer narrative. After a few walks around the space, familiar faces and patterns begin to emerge from the works. A chevron pattern, a white bird, and a few repeating subjects begin forming the protagonist’s island.

Dunn invites the audience into the world of her protagonist with several perspectives. One work, Moonlight Tug, features a more expansive view. The piece features muted pinks and yellows, made bright against the use of grey, navy and black. The viewer looks upon a central home built on water from above, also seeing a boat out on the water over the reflection of a moon. Other homes and two inhabitants standing on the waterfront can be seen, and a flower raising high against the house.

The perspective narrows in scope in other works, such as Green. Green features three subjects, the view narrowed onto their faces. These subjects can be seen throughout the work, and this piece hints at their relationship. Standing close, one can assume they are well acquainted, and this seems to be a snapshot of the trio from the scene in the work Visitation, which zooms out to show the three now on an expanse of sand, with a red blanket laid out, and an umbrella standing from the ground, providing shade. Details like a vintage car provide a context, but the scene remains familiar.

Some of the works provide even smaller slices of life from the island. Patiently Waiting depicts what appears to be a grapefruit, sat upon a plate on a table, viewed from above. As if the viewer is looking down on their breakfast, the work can be related to a view shared by many. The colorful chevron background and familiar bird connect this work to the larger collection. By introducing the viewer to this small, personal view, the audience can become further familiarized with the protagonist.

Though the oil and Flashe works were quicker to attract my attention, the graphite works are significant. The scope of these three is reflective of the collection as a whole, each providing a different level of perspective to the viewer. Viewed from the left, the first shows a full body shot of one of the subjects, pictured with a bike and dressed for swimming. The second provides another close up, this time on two of the subjects faces. This portrait is the only to break the standard of circular pieces. The circle expands a bit at the bottom, to allow for one of the subjects hands to be shown around the back of the other. This act of intimacy is made even more poignant by the breaking of the convention. The last graphite image, once again, gives the viewer a look at the home from above, the same umbrella from the beach now over the entire house.

From the larger points of view down to the details, this microcosm that the protagonist inhibits in “Cover the Waterfront” is established for the audience. As the viewer is let into this world, the themes that the artist stated emerge. One feels simultaneously part of, and separate from her world, mirroring the same feelings of belonging and isolation that Teresa Dunn intended.