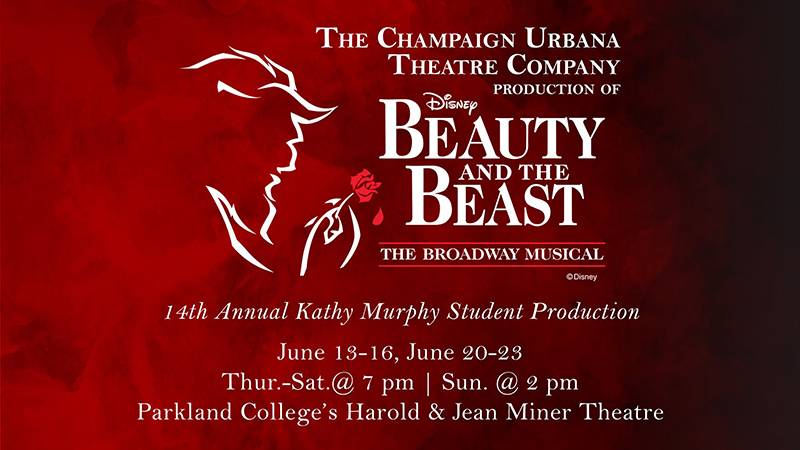 I think it goes without saying that Champaign-Urbana, even Champaign County as a whole, is jam-packed with talent, and wonderful theatre and performing arts. With several theatre companies, acting classes offered by local performers, terrific theatre programs at the university, Parkland, and both high schools, the opportunities to enjoy, participate in, and learn about theatre/performing arts are plentiful.

Some of the best opportunities are the several student productions held every summer here in C-U. One in particular is the Champaign-Urbana Theater Company’s annual Kathy Murphy Student Production. For the 14th year, CUTC holds a production in which cast and crew (aside from director) is made up of local students giving them the opportunity to hone their skills onstage and backstage.

This year, CUTC and the students involved take on the beloved musical Beauty and the Beast. I had the fortunate opportunity to speak with director Whitney Havice about this year’s production.

Whitney Havice: There are many great opportunities for students to be involved in theatre in the area, which typically consist of a combination of students from elementary through high school. Our production consists of middle and high school students, specifically. One of the special qualities of CUTC’s annual student production is the involvement of students, not just from Champaign-Urbana, but from all over the area…even as far away as Danville.  It gives the students an amazing opportunity to make connections with other student thespians from outside of their own school or even district and build life-long friendships while fostering and growing an appreciation of live theatre. Another special quality of CUTC’s student show is the educational aspect of the production-we strive to treat the cast in the same way that we would a cast of adults, with staff and crew leading them who have years of experience, including professional experience, between them. They get to learn from and work with some of the best in the area.

Smile Politely: Can you speak briefly on the amount of work the students have put into this show? Both cast and crew?

Whitney Havice: This show is a beast to produce (pun intended)! The cast and crew have put in endless hours of work to make all aspects of the show come together. The build crew for the set has especially put in an incredible amount of volunteer hours to bring the Beast’s castle, Belle’s cottage, and everything in between to life, and we absolutely couldn’t have done this show without their time and efforts.

Smile Politely: Beauty and the Beast is a tale as old as time (I had to), so how will this production stand out from other versions of the show people have seen?

Whitney Havice: With this production, we strove to really show the layers underneath the well-known and iconic songs and characters to portray what’s at the heart of the story…the journey of the title characters to discover that what we see as “different,” about ourselves and others should not be cause for fear or self-doubt, but a celebration of what makes us human.

Smile Politely: Has it been challenging directing a show that is so well-known? Any pressure?

Whitney Havice: It’s always a little challenging to direct a show that’s so well-known-audiences expect to see certain things, and if those aren’t there, they may leave disappointed. There’s already a set level of expectations to live up to.

Smile Politely: How have the students that are part of the crew handled taking on responsibilities they may not be used to?

Whitney Havice: We have a great group of students volunteering to help out on the crew this year, some who never have before, and they’re doing an incredible job stepping into their role!

Smile Politely: Other than supporting local art and the hard work of the students, why should community members attend the show?

Whitney Havice: Our show is filled with the incredible talents of our cast who will make you laugh, as well as dazzle you with their vocals and show-stopping choreography. Emmy Daniels and Jerry Strain, who play Belle and the Beast, respectively, have done an incredible job at delving deep into their characters and their relationship with each other…there’s at least two moments that I can think of that will evoke some serious Kleenex reaching.  Any preconceived notions that audiences may have about attending a “student” show will fly out the window once the show gets started, and they’ll enjoy an incredible collection of talent on an impressive set performing a well-beloved and iconic story brought to life onstage.