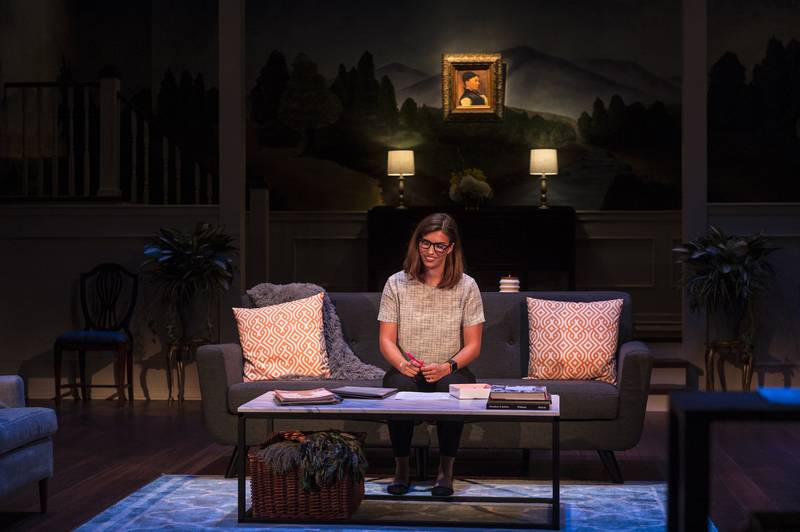 Do yourself a favor and hurry to snag tickets to An American Daughter (it began Thursday, October 4th) at Krannert Center for the Performing Arts’ Studio Theatre — 7 of the 9 performances already have waiting lists. Playwright and Pulitzer Prize winner Wendy Wasserstein wrote An American Daughter in 1997, and, over 20 years later, one of its major themes continues to be a relevant topic of research, discussion, and debate. It’s a topic that has been persuasive, orbiting the cultural zeitgeist that was the as far back as the 1800s: feminism. The can-a-woman-have-it-all complex was asked of us then and continues to be asked of us today in 2018. The hindsight continues to be all that more interesting when we consider the political climate in 1997 when Wasserstein finished this play. Hillary Clinton was challenging the cookie-cutter, cookie-baking housewife image that was cultivated in the 1950s, whilst Krannert’s adaptation of the play opening this week seems to be an all too painful reminder of…well, you know.

These themes were not lost on me. Was I the only one wondering if the timing of this adaptation was merely coincidental and just merely appropriate considering the current political climate? What could we possibly glean from (another) male director’s perspective on this famed feminist playwright’s work? Will this bum me out even more (spoiler alert: au contraire)? Well, I found out. Tom Mitchell directs this adaptation of An American Daughter, and I spoke to him about this rather prescient production.

Smile Politely: What went into deciding An American Daughter was a good performance choice for Krannert? Did you advocate directing it yourself, or did you realize you would be the right director for it?

Tom Mitchell: I thought that An American Daughter was a timely play as it addresses the difficulties for women who engage in politics and leadership. It follows up on the play I directed last year (All the King’s Men by Robert Penn Warren) that I cast with all female actors. In that play I was also interested in raising questions about the role gender plays in politics. The play is also a straightforward story with realistic characters. In the mix of plays we were selecting for the season (including a musical comedy, a devised work, a ritual-theatre piece, and a highly conceptual adaptation of a novel), I thought this might be good for actors, designers, and audiences.

SP: What sort of influence has Wasserstein’s work had on your own, if any?

Mitchell: I like Wendy Wasserstein’s plays. We are of a similar generation, and I appreciate her voice as a feminist playwright from the last quarter of the twentieth century. Her work represents the challenges and victories that were experienced as women took their place in the professional world, in academia, and in politics. Wasserstein, who died in 2005, didn’t simplify issues in her plays. She often explored both the positive and negative effects of changes in society. Her characters are seldom just mouthpieces for a political point of view.  Instead, they are individuals with complex motivations and emotions.

SP: Do you think the timing of this production is especially relevant considering the political climate?

Mitchell: I hope the timing is relevant. When we decided to do the play about twelve months ago, I thought that it was likely that we would be considering issues regarding women in government. With the latest round of hearings, there are many connections that can be made. The purpose of the theatre, I think, is to provoke us to think and make connections with the world around us. When I choose projects to direct, I often try to think about what resonances might be felt when the play finally takes the stage.

SP: Do you think this is more reason for audiences to attend the play?

Mitchell: The connection to current events is one reason to attend the play. I hope that another reason is that Wendy Wasserstein tells a compelling story with interesting characters. She also has a sense of humor, and the play allows the audience to laugh now and then.

SP: What information would you like readers to know about this performance An American Daughter?

Mitchell: I always want our audience to appreciate that the productions of Illinois Theatre are designed, built, managed and acted by students in the professional theatre training program at U of I. This production features a cast of undergraduate students. They have been rehearsing 24 hours a week since classes began in August. Although I am a faculty member, most of the team of designers, technicians, and managers are either undergraduate or graduate students. This work is part of their preparation to work in the professional world of theatre, film or television.

Entertainment that continues to be culturally relevant, stimulating, and intriguing does still exist. Mitchell’s adaptation of An American Daughter turns the wheels in your brain and manages to keep the wheels of discussion turning as well. It’s important to continue these discussions about topics that matter, and it’s easy and even enjoyable when we can do that by watching a play like this. Obviously, it’s on to something considering it’s practically sold out already. If you don’t manage to get to Krannert, at least do yourself the favor of reading about Wendy Wasserstein and her various works, including but not limited to An American Daughter.

Hop on the waiting list or buy tickets here.