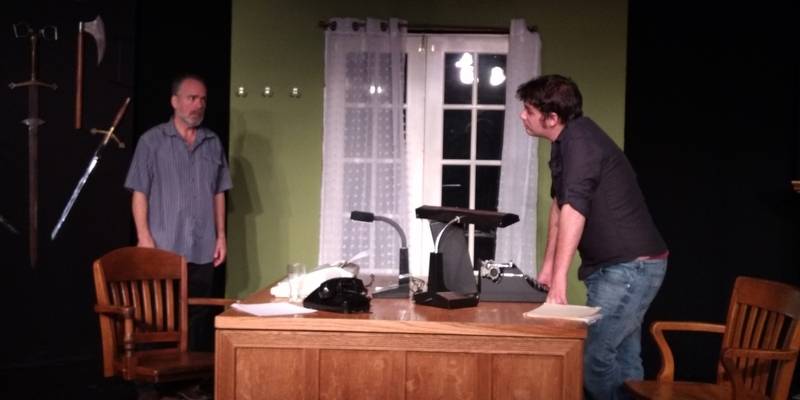 The name Ira Levin may be familiar to you. If you’re a movie buff, you’ve probably heard of Rosemary’s Baby, A Kiss Before Dying, and The Stepford Wives, all of which were based on his novels. Levin also wrote a play entitled No Time For Sergeants which was later adapted into a film of the same name and launched the career of Andy Griffith. If it seems contradictory that the writer of Rosemary’s Baby would also write a stage comedy about a good-natured hillbilly in the army, it shouldn’t. Not if you’re familiar with a little show called Deathtrap.

Deathtrap, which has the distinction of being the “longest-running comedy thriller on Broadway,” earned Levin an Edgar Award and a Tony nomination for Best Play. It was subsequently adapted for the screen in 1982.

On October 26th, under the direction of Aaron Polk, Deathtrap will open at SoDo Theatre under the banner of Twin City Theatre Company. Following last season’s impressive productions of Waiting for Godot (directed by Jace Jamison) and The Mountaintop (directed by Dustin Yocum), Twin City seems once again to have pivoted in an interesting creative direction. And in Polk, who has directed a number of plays in the C-U area (including at Urbana’s Station Theatre), they have found an enthusiastic partner.

Here’s what he had to say.

Smile Politely: You’ve directed this play before. How does that inform your experience directing it now?

Aaron Polk: This is an interesting question. The last production of this show I did was for The Celebration Company at The Station Theatre in 2005. It was not the original play selected for the given time slot. I switched plays last minute due to casting difficulties of the original play. The end-result was rushed and not really up to the normal standards I would set for myself with a play I am so passionate about. There are certainly things with that production that I said, at the time, I would do differently if given another opportunity. And here we are…

This production has a different focus. There is a “breaking of the fourth wall” element that I did next to nothing with in the last production. I have put this element (the idea of “a play within a play”) front and center this time around, right down to including it in blocking choices and in the scenic design. The trick there was to break the fourth wall without really breaking the fourth wall. It’s been a tough balance.

SP: What is it about the play that appeals to you?

Polk: I have always loved this play. It’s clever. And it continues to astound me. I think, in retrospect, that I didn’t play with the meta elements last time because I didn’t really realize they were there. Essentially, I find something new in it every time I read it. There are even references in the script to other events of the play that completely flew over my head last time.

One thing that I’ve noticed as well about this play, as I’ve talked about it to people over the last several weeks, is that everybody seems to have heard about the play without really knowing anything about it. They know the gist of the basic plot without being aware of the endgame or the plot’s myriad twists and reversals. There’s a big twist in this script that might be my favorite twist in any script I’ve ever read. And it’s odd to me that an audience comes to this play not knowing what it is. This is the fortieth anniversary of this particular play. It’s been around a long time.

Further, the play is a comedy. It’s also a thriller. The mixing of those two genres would be really easy to screw up. I adore the challenge of separating the two genres but still making the play a bit of both.

SP: What has been the biggest challenge in bringing this production to the stage? What about it have you enjoyed the most?

The set for this play is so complicated. I had multiple scenic designers come in and hear what we needed and be like “Yeah…I don’t think so. Not in that space.” I eventually — with the aid of my friend Thom Schnarre — just designed the whole thing myself. Thom’s original concept that I adapted and ran with.

The play also requires a ton of props. An aggravating number of props. And then you consider that the play takes place in 1978, so not just any prop will do. The hardest things to find have been the weaponry. I have a good number of friends that have loaned us weapons for set dressing but the functioning weapons — the ones that are used — have been hard to come by. Did you know that prop rental companies are no longer allowed to rent out weapons? I didn’t, until about a month ago.

I’ve had to build some of the weaponry. Let me tell you: you get strange looks from craft store clerks when you tell them you need supplies to build a crossbow.

SP: I’ve seen the SoDo Theatre space utilized to great effect in the last season or so. How are you making use of the space?

Polk: To be completely true to the script, this play cannot be done in this space. It really shouldn’t have been done at The Station. It’s just too complicated for spaces that small. But Thom’s idea really intrigued me and, when I told the cast about it, their eyes lit up. It’s a minimalist approach that only utilizes black curtains and the absolute essentials. We have to have French doors. We have to have a fireplace. But we don’t really need walls, right?

This concept does, admittedly, require an audience to get on board. They have to suspend their disbelief and pretend the curtains are not, in fact, curtains. But the play stars David Barkley and Evan Seggebruch, both of whom are incredibly engaging actors.

SP: As a director who has both experience as well as some time away from the theatre, what is your philosophy of directing? Has it evolved?

Polk: Oh, my goodness, yes. I am certainly more focused this time around. Before my eight-year hiatus from directing, directing (and theatre, in general) had an immensely social aspect to it: “I am in a space, making art, with my friends!” After rehearsal, I was in a bar, having beers, with my friends! This isn’t so much the case this time.

I have a day job. And young children at home. All five members of my cast have day jobs and shit to do in the morning. My stage manager is usually arriving to rehearsal after having gotten off work mere minutes beforehand. We have four rehearsals a week over a four-week period. Time is of the essence.

I had everything scheduled down to the letter from the initial read through. I had a pretty stringent idea of what needed to get accomplished on a given night. And theatre is supposed to be fun. I don’t want an angry cast because I’ve kept them up past their bedtime.

With all of that said, the social aspect is still evident. Evan and I have become friends. The rest of the cast and I have certainly blown a good amount of time in idle conversation and story swapping. There is a distinct atmosphere of mutual respect and trust. We laugh a lot. I think we all go home happy.

SP: As an incentive to the prospective audience, is there anything else you want people to know?

Polk: It’s the fortieth anniversary of the longest running thriller on Broadway! Original artwork used in the set by Thom Schnarre! I dunno — what else do you want to know?

What else, indeed? For tickets, visit the Twin City website.