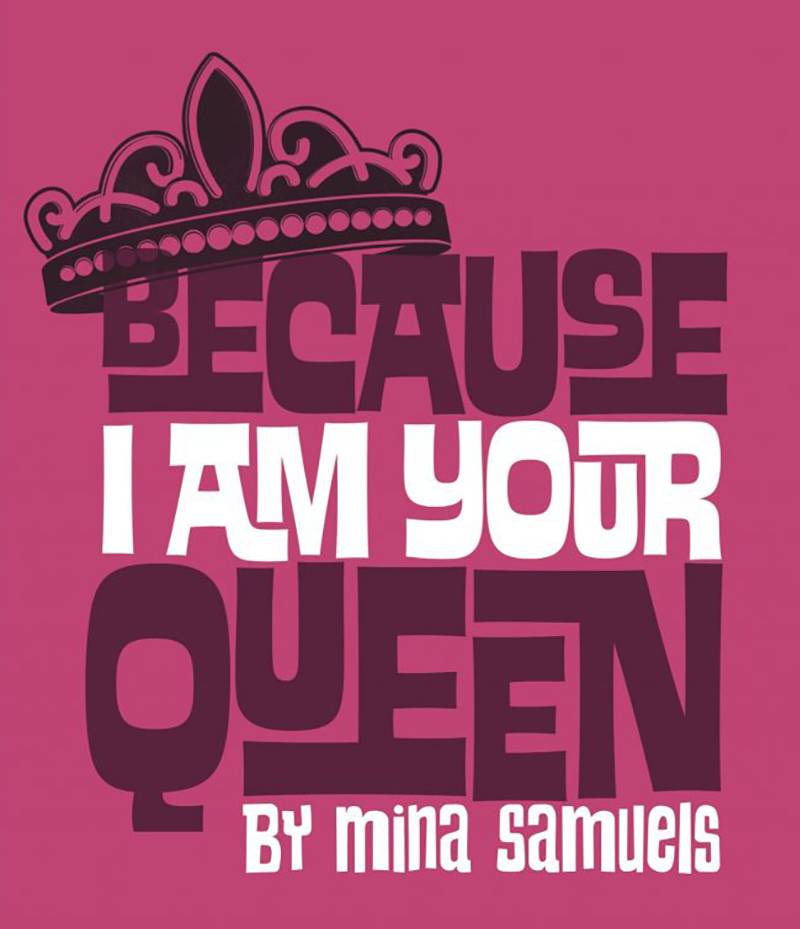 Six queens (some historical, some fictional), three astrophysicists, and one socio-political activist named Gloria (wink, wink) are trapped together in deep space. No, this is not the elevator pitch for the latest CW sci-fi series. This is experimental theatre at its best. This is Mina Samuels’ Because I Am Your Queen, which is currently enjoying its premiere production right here at Krannert Center for the Performing Arts.

The choice to work with Illinois Theatre and KCPA is a significant one. The University of Illinois Campus is known for its cutting-edge research and award-winning laboratories.  But Because I Am Your Queen is here to remind us that laboratories also come in the form of art studios and performing arts spaces.

And sometimes, those laboratories look like spas. Yes, that’s right, spas. And I must confess that just the idea of Queen Elizabeth I and Lucretia Borgia gossipping over pedicures practically sent me running to the ticket office. But because everything in this production is intentional and deeply layered, the gal pal spa-day-filled-with-steam-and-shade trope is merely the initial point of entry into this experience.

The spa setting is both ironic and deeply informative. The emotional work these women are doing goes well beyond the surface. Spa rituals not only provide bits of stage business to ground the scenes in a tactile reality, they also underscore the importance of a women’s space, however mired in modern notions of youth and beauty it may appear.

The chemistry between the actors and their creative use of props, costumes, and set point back to the production’s roots in eco-feminism and the Moment Work™.

So, if — or rather, when, you go, which I think you should— here is some background info that will help you enjoy a deeper experience of Because I Am Your Queen.

The “Moment Work ™ approach” to theatrical production and meaning-making

Moment Work™ invites devisers to explore how all the “elements of the stage” can carry the story, further the narration, create beauty, tension, mystery. Rather than “dress up” an already-written play, we develop the form and the content simultenesouly. We ask “How can movement, light, sound costume, or projections, become as central to the dramatic event as the words?

Moment Work,™ as explained by tthe Tectonic Theatre Project which created it, “is [an] attempt to create theatrical narratives from the ground up —in other words, to ‘write performance’ as opposed to ‘writing text’.”

This method “gives all company members the freedom to create individual, self-contained theatrial units (Moments) and then squence these units together into [phrases or sentences] that will eventually become a play.”

Dramaturg Katayoun H. Salmasi explains the significance of an eco-feminist philosphy to this play. The stories of “these queens affect perceptions of the world, changng accepted but perhaps mkisguided views as we change the planet.” Referring to Loi Ann Lorentzen’s book Ecofeminism, Salmasi observes that, “critical connections between the domination of nature and the exploitation of women are paramount.”  Queens of fiction and reality stand together against the male-created narratives that limited and oppressed them. As the women reclaim their narratives “the entire community evolves together.” They talk things through, they listen and togehter they find better solutions.  And when they do, as Salmasi notes, “the community wins.”

Brush up on your history and mythology

Hermione, Elizbeth I, Lucretia Borgia, Medea, La Reine, Mary Queen of Scots.  Google ’em and get to know them and who told their stories.

When arch rivals Mary Queen of Scots (played to perfection by Rachel Fox) and Elizabeth I, the Virgin Queen (the ever regal Marlene Slaughter) work through their historic issues during a vaginal steaming session, the cleansing and rejuvination is both physical and emotional. Laughter, which there is much cause for throughout this production, is the initial release. It is soon followed by tears and clarity.

In this place beyond place, this time beyond time, all bets are off and anything is possible.  Without time there can be no claim of anachronism. Social media-like posts on digital screens announce the name, origin story and male creator of each queen’s story, along with her number of social connections. Confessions are made while scrolling through digital tablets. Charlee Amacher’s Lucretia Borgia enacts a breathtaking confrontation with her villanous husband via cell phone. This monologue showcases Amacher’s spectacular range, moving easily from dark laughter to rage to epiphany and back again.

It becomes pantifully obvoius how limited these women’s choices were. There is true Greek-tragedy-style catharsis as the women move through their painful tales into new narratives written as a community and rooted in hope and redemption.

Kuods to the entire production community for this brave and inspired theatrical experience. Rich in detail, nuanced with historical and mythical allusions, while still deeply relatable, Because I Am Your Queen places women’s current struggles in far wider historical context.

Experience this laboratory of meaning-making for yourself. Laugh, cry, let go of past injuries, and consider how you can rewrite your own narrative.

All photos from the Illinois Theatre Facebook page except “The Cleaning Superstar,” which is from Debra Domal