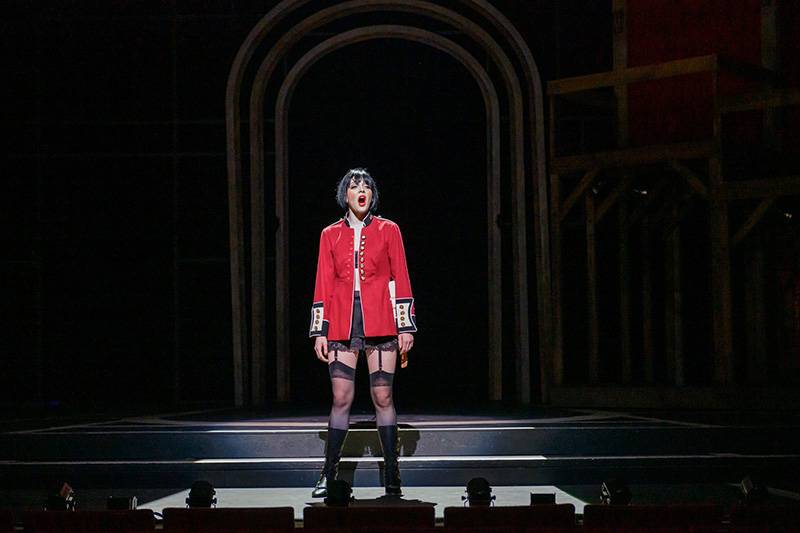 In my preview for Cabaret, I made the mistake of only attributing the production to the University of Illinois Lyric Theatre. I am delighted to be in the wrong, for this production instead marks a historic collaboration between three departments: Lyric Theatre, the Department of Dance, and the Department of Theatre. The presence of each group can be felt in the show, and the experience is richer for it. Cabaret’s creative team consists of Julie Jordan Gunn directing music, Latrelle Bright for stage direction, and Eliot Reza Emadian with choreography. What emerges is a theatrical experience that engages with themes of nationalism, escapism, and bigotry through both spectacle and realism.

Cabaret provides a feast for the eyes in its production value. The costume work, helmed by Samantha Padillo and Hannah Haverkamp, shimmered and spooked with a wide array of looks. The stand-out outfits of course donned the Master of Ceremonies and Kit Kat Klub performers; their outfits embraced glamourous androgyny and stylized shambles. Emily Christofferson and Melissa Hall accented them with hair and makeup that popped without feeling distracting. The more realistic set pieces, as designed by Eleni Lukaszczyk, were effective and economical of space. Those that moved, including the train which brings Clifford to Berlin, served their purpose nicely. The ending of Cabaret always leaves one’s blood running cold, but a special lighting effect from Alena Samoray powerfully underlined the emotional weight. Rather less chilling was a filter used in “It Couldn’t Please Me More,” which can only bring a goofy smile to the face.

Aurally, Cabaret brings a lot more to the table. Julie Gunn led the band valiantly through a score rife with blistering tempos and angular sonorities. I appreciate their ambidiegetic status – sometimes they are “in the action” while others they accompany from seemingly nowhere. Alec LaBau and Dominick Rosales mixed the sound serviceably, though a more three-dimensional texture could be brought to the busier vocal scenes. In particular, the echoing sequence in “Money” would have benefitted from additional clarity.

Indeed, “Money” and other songs from the Kit Kat Klub comprise the biggest production moments in Cabaret, and they are the moments which tend to get the most attention when discussing this show. The Kit Kat numbers comment on the story through interspersed episodes which lack plot significance. In this sense, the scenes did their job well and left little work for the audience to make interpretive leaps. Corey Barlow led the way as the enigmatic Master of Ceremonies. He sang his numbers with a smoothness and polish that matched his glittering wardrobe while moving with confident poise.

My primary criticism is hard to aim, for perhaps the issue stems from the technical or directing team, but Barlow lacked the magnetic energy necessary to captivate his audience. Nothing about his performance was technically wrong, yet I never felt locked in a tractor beam as one should with a character who bears the title of Master. He attempted to communicate “directly” to the audience in a few moments by bending down to address specific people – this technique is well-worn and wholly ineffective in a space the size of Tryon. I encourage him to fire his comments at further sections of the auditorium. How much more compelling to be sitting in the balcony and have a finger pointed your way; it brings hundreds more into the dialogue instead of leaving them feeling like an outsider. Despite all of this, Barlow deserves high praise for how he handled the ending of the show, which I won’t ruin for those unfamiliar with the show. His physical acting sold that sequence perfectly.

The Kit Kat Klub dancers shared many of the qualities of their leader. Eliot Emadian equipped them with evocative choreography which covered a large spread of styles, and the ensemble generally delivered on the ambitious work. My partner, who has significantly more experience adjudicating dance than I do, lamented a lack of sharpness at times; if intentional, the performers needed more character work to convey that message. Character work does seem necessary, as most of them wore a countenance that belied their discomfort with the numbers. That discomfort might have been spun into a narrative about the challenges facing sex workers and the faux glamour of the setting. Instead, the audience registers a lack of commitment. This is most egregious in “Two Ladies,” which felt devoid of snark in favor of shame.

A final, brief thought on the scenes at the Kit Kat Klub: a traveler should have been closed to mask the depth upstage. The performers seemed small against the wide-open back drop, which not only forced them to work harder but robbed the overall image of being in a small, seedy night club.

The character who bridges the Kit Kat Klub scenes and the “real world” is Sally Bowles. Portrayed here by Anna Benoit, her story is the most dynamic and provides most of the driving action. Sally is the embodiment of willful disassociation from the disappointments of life, and that manifests itself on the surface as romanticism for the banal. Benoit moved through space with a put-on clumsiness to match the character’s forced bright eyes, an effect which was mostly worked. Sally gets the most opportunities for vocal fireworks, and Benoit delivered in spades. Her rendition of the title song brought the house down.

However, the most pleasant surprise of the evening came from the least glamourous characters in Cabaret. The scenes that take place in Fräulein Schneider’s boarding house have the potential to drag the action a halt, but the cast of this production provided them new life. The subplot with Herr Schultz and Fräulein Schneider (portrayed by Fabian Guerrero and Erica Hernández respectively) offered subtle moments of charm and heartbreak that contrasted perfectly with the over-the-top Kit Kat Klub scenes. The other tenant, Fräulein Kost as played by Amy Toruño, brought an earthy humor as well as a lovely passage sung in fairly accurate German. Cabaret’s biggest laughs came from the performance of Theo Mynka as Ernst Ludwig, until he revealed himself as part of that most infamous of political parties.

All these characters are seen through the eyes of Clifford Bradshaw, the American novelist come to Berlin to write his next book. Connor Kamradt plays the role straightforwardly, which works well with Cliff’s perceived sense of neutrality. However, part of the story for Cabaret is learning that there can be no neutral party amidst the rise of violence and prejudice. As the character comes to say: “If you’re not against them, you’re for them.”

Lyric Theatre, the Department of Dance, and the Department of Theatre came together for a piece of musical theatre with legendary precedent. Both successes and struggles resulted from this collaboration, and yet one can see the shadows of something truly special. If you have the opportunity, I strongly encourage you to take time to see Cabaret at the University of Illinois. The three departments deliver an engrossing experience which should appeal to a variety of theatrical sensibilities. You will be challenged, but you will also be rewarded.

Top image: Photo of scene from Cabaret with Anna Benoit as Sally Bowles in red jacket and black lingerie, boots, and wig standing center on a dark stage. Photo by Darrell Hoemann.