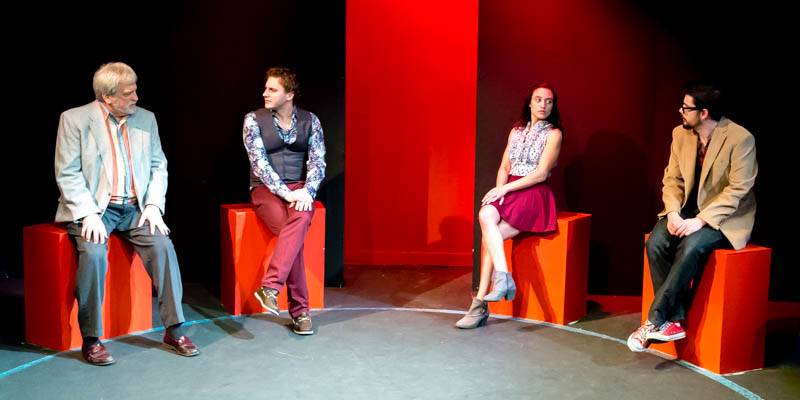 I must preface this review by saying that my knowledge of Cock and the playwright Mike Bartlett, other than minimal research and brief conversations with fellow theatre fanatics, was quite limited. With that said, the Station Theatre’s production of Cock is a wonderful example of how terrific performances and stellar directing can lift up an otherwise imperfect script.

Upon entering the theater, one discovers a simplistic set that makes the Station’s black box theater feel more intimate than usual. Rather than undermine the audience’s experience, the set design adds to the story as it unfolds; especially as one realizes that the theater itself is arranged much like a cockfighting arena—a painted circle in the center with seats for the audience on all sides. Such a decision by director Rick Orr was clearly intentional, as it forces the audience to sit face to face with the combativeness of raw, imperfect, and hurting humans.

I will admit that at first the script did not sit well with me. Frantic, and a bit oddly structured, it was difficult to settle in and enjoy the story. After the first few rounds of emotional sparring, chest-puffing, and posturing by John (Evan Seggebruch) and his boyfriend (Coy Wentworth), the cast began to pull me in and soothe the uneasiness I felt.

Being a human story about the search for happiness—perhaps the search for what we perceive to be happiness is more fitting—and the not-so-stellar humans among us, this show needed a cast that could offer nuanced performances capable of showing raw emotional fragility and brokenness. The cast did just this. And although the characters embodied various forms of brokenness that I connected with, I frankly did not like them. Yet, I still found myself pulled into the show because of the actors on stage.

Not often do I find a story where I am torn on whether I loathe a protagonist or not, but I attribute that to Evan Seggebruch’s nuanced performance. As written, John is, suffice it to say, a bit spineless. He is unable to make a decision, and cannot fathom how his indecisiveness impacts everyone around him. But Seggebruch’s performance seemed to bring much more dimension to the character. We see a young man struggling to fully understand himself. He brings a certain endearing quality to John at the onset, but quickly strips that away as his John tumbles into the hole he has dug for himself. Seggebruch portrays a John that offers glimpses of a truly good but broken person, but quickly snatches them away in exchange for an unwillingness to overcome his own insecurities and fears when happiness is literally staring him in the face.

Coy Wentworth as John’s boyfriend “M” (for “man”) was just as stellar and carried his own weight while on stage with Seggebruch. Wentworth, who I already look forward to seeing in future performances, brought to the stage a man who in battling his own insecurities projects them onto John. Wentworth does a terrific job of showing M’s sincere love for John, but also his inability to understand how, in his desperate attempts to keep John to himself, he has made him feel that much smaller. At moments lovely and charming, and at others a bit emotionally manipulative, Wentworth steals the scene several times over with his comedic timing, and his chemistry with both Seggebruch and Kimmy Schofield.

Speaking of Schofield, she brings a brilliant amalgam of snark, sternness, and heart to “W” (for “woman”). Although a woman that enters John’s life at a point of confusion and self-discovery and really only serves the purpose, at first, of helping John figure out his sexuality, W becomes much more. She becomes the hand that guides John through his muddled mind. Nothing is more evident in Schofield’s performance than this fact. At all times you can see in her face that she sees what John cannot, that John is wonderful and deserving of being love the way he wants to be loved. That she desperately wants to be that person for him, but in the end will not let John drag her down with him. The anger and exasperation Schofield presents in the final scene is a beautiful culmination of finally giving up the tiring dance W had to perform to keep John in her life.

Finally, Lincoln Machula as “F” (for “father”), although his time on stage was short, brought a voice of reason to the stage. Or so it seemed. Machula portrayed a father that seemed to feign a stoic persona, but did so to disguise his own turmoil. His advice, much like W argues in the final scene, is very much rehearsed and seems to be more for himself then his son or John. Machula does a fine job showing us the turmoil just bubbling under the surface while also being there for his son during a crisis.

When the crass humor is stripped away, you are left with characters that are relatable whether that be in a positive or negative way. We all know or have known people like them, broken and bruised by the search for happiness. But as Cock illustrates, the best of us can become lost in that endeavor and lose ourselves—potentially pulling our loved ones along with us. Perhaps those who see Cock can not only watch a study on human brokenness and happiness, but also see the dangers of toying with others’ hearts when at war with one’s self.

Cock, directed by Rick Orr, is playing at the Station Theatre until April 7. For tickets and more information, click here.