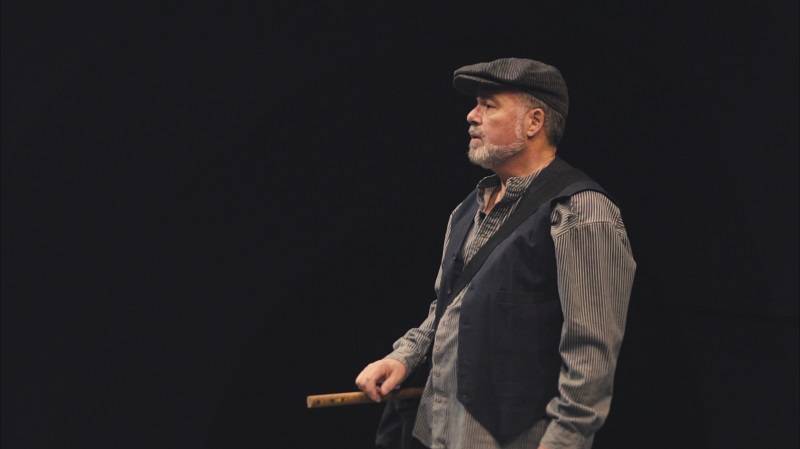 Two years ago, the Celebration Company at the Station Theatre opened their season with a Will Eno play, Open House, which was a family living-room drama – my least favorite type of play. Still, there’s merit behind unpacking emotions through those types of explosions, and Eno’s many accolades prove that he’s quite adept at it. Title and Deed demonstrates that he’s also astute at a much quieter exploration, one that looks at one particular person and how he struggles to fit in to his surroundings.

So let’s start with the surroundings. Jadon Peck’s set design is sparse, which is what is called for: a bare stage in the present day. But the monochromatic spectrum with the darkest black in the center placed over a corner of the stage is slightly hypnotic. My eyes were constantly pulled toward the darkness, meaning I had to consciously re-direct my gaze toward the light where David Barkley stood for most of the sixty-minute show. I had to choose to pay attention, but the performance made that decision a no-brainer.

The character seems to exist outside of time and space, but subtle hints from the script created a scenario in my mind, with a little help from a deceptively simple sound design. As the monologue proceeds, the soundscape punctuates his words so naturally that I was very nearly tricked into believing they were real. Although there’s no way I’d be hearing airport noises unless they were part of sound designer Brandon Reed’s intent, the hinted thunder and ambulance effects were done in such a manner that I momentarily thought, “Wow, what a coincidence that we’re having a storm while he’s talking about… oh.”

As skilled as the technical aspects of the show were, the true star was David Barkley. In the spotlight constantly for the whole play, he delivered a monologue made entrancing with his genuine and earnest demeanor. I swear, his eyes glistened on the verge of tears for the entire hour.

That’s not to say the entire script is sad, I’d go more with bittersweetly humorous. Barkley’s “Man” is displaced, far from home by choice, and bending the ears of some passerby. While there’s no audience participation the way there was in last season’s Every Brilliant Thing, most audience members in the nearly-full house found themselves interacting with the character. Heads nodded, people moved forward in their seats, some reached toward him during particularly touching passages. And everyone laughed. Loud, long, in sympathy or recognition, or because a line was legitimately funny.

Here’s a not-so-known thing about me: I rarely laugh out loud. I’ll smile, maybe give a chortle. Sometimes I’ll say, “That’s funny,” and I’ll be genuinely amused. A lot of times I will clap in place of a laugh. This play made me laugh, out loud, in all those ways mentioned in the last paragraph. Barkley made me laugh, out loud, through most of the play. Part of me wants to share the best of those lines here, but I enjoyed them so much by being surprised, I wouldn’t want to spoil that experience for anyone.

I also tend to stay away from superlatives, but his performance was flawless. If there is anything he could improve upon, it is letting the laughter die down a little more before continuing, but as I saw it on opening night, there was no way he could have known just how long we needed. Spoiler: it was a long time.

The “Man” in Title and Deed is self-effacing, homesick yet interested in his new experiences, a little heartbroken by a recent romance, and not quite at home in his body, despite being past middle-age. David Barkley was able to convey all that even through a script-referenced dispassionate tone of voice – the man says he’s not actually sad, that’s just how he sounds – but an extremely expressive face. It was a smart choice to not deliver the foreign man’s speech with an accent; that could easily have been interpreted in a negative way. Yet, it was fairly amusing that each relative he quoted from “back home” had a different type of accent: Eastern European, Italian, and Irish were the ones I picked out. There were moments when the character loses his train of thought, and Barkley’s confusion was so convincing that my heart hurt thinking it was opening night flubs causing these trail-offs and pauses, only to backpedal when the next words made it clear that it was scripted.

It was a masterful delivery inside a tight production; I’d prefer that to believing I’m just gullible.

I can’t say it strongly enough: make a reservation to see Title and Deed this weekend or next. It’s just over an hour of your life that will leave you with things to think about and tired cheeks from smiling.

Title and Deed plays at the Station Theatre this Wednesday through Sunday at 8 p.m. and next Wednesday through Saturday at the same time. The Station’s prices have recently changed for simplicity: all tickets are $15; student and senior tickets are $10. They still do not take credit card, so bring cash or your checkbook. Make your reservations online or by calling 217-384-4000.

All images courtesy Nic Morse of Protagonist PIzza Productions, who made a trailer for the show that isn’t too spoilery. You can find it on their facebook page.