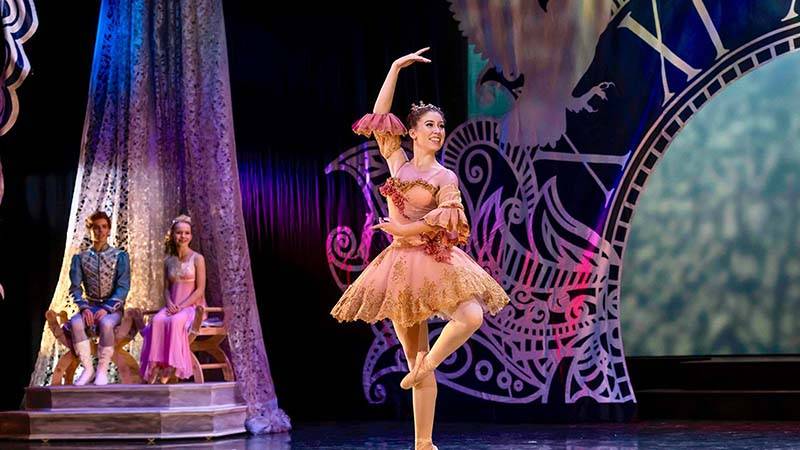 You know it’s opening night of the Champaign-Urbana Ballet’s The Nutcracker  when the Krannert lobby is filled with girls in their best dresses carrying congratulatory bouquets of flowers. The holiday decorations are aglow and there is a taste of excitement in the air that is reminiscent of a graduation ceremony, or a long-awaited holiday celebration that has finally arrived. The arrival of this beloved annual performance at the Krannert Center for the Performing Arts somehow always feels special.

As I rode up in the elevator to the lobby, the bravest in a trio of young girls asked me if I was going to the “festival.” Her mother explained that she meant the Tryon Festival Theatre. I smiled and told her that I was. Looking back, I realize that “festival” may just have been the perfect word for what we were all about to experience.

We made our way to our seats, saying hello to friends on the way and listening to the sound of the Champaign-Urbana Symphony tuning and warming up. The light projection on the curtain hinted at the dazzling light show to come. And as the curtain rose, like Clara, we got comfortable and slipped into a dream.

Lighting designer Kevin Gawley and production designer Cory Rodeheaver combined their talents to create a sense of place that moves easily from large to small, drawing us into Drosselmeyer’s workshop, then back out to the front door of the Stahlbaum home. Digital projections merge perfectly with physical set pieces, creating a sense of depth.

A quick note about The Nutcracker’s cast before we go any further. CU Ballet’s dancers typically learn as many as seven parts in this production, shifting between them on varying performance nights. The dancers noted here performed on the evenings of November 30th and December 1st, as well as on the afternoons of December 8 and 9.

The first few minutes of Act I made many things clear. Janie Lee (Clara) is a charismatic performer with skill and grace. She played all the right notes in the range of a young girl’s emotions. Clara went full on Queen B, holding court with her friends, like a young Blair Waldorf on the steps of the Met (Google Gossip Girl for the reference). She passed around the Nutracker doll (the one she literally had to fight her brother for) to inspire envy and approval. This is the type of girl who will bravely help save the Prince and stand at his side as his equal.

The challenge of manifesting Drosselmeyer’s magic is well-matched by the talent of the production team, promising spectacular sets, effects, and lighting to come in the following scenes. Whether you read Drosselmeyer as a Santa-like godfather figure or a menancing wizard, his magic drives the action forward. The enchanting of the Christmas tree, and its growth to the sky, was well-executed with a combination of lighting and digital projection.

Artistic director/choregrapher Deanna Doty is not only a skilled teacher and choreographer, she is a keen storyteller who understands that ballet is a language — a form of communication. Under her direction, even the youngest of the dancers brought both their best moves and their best character expression. Great attention was paid to the smallest of gestures and facial expressions. This was charmingly apparent in the performances of young Fritz (Cale Helfer) and his fun-loving friends as they wreaked havoc on the Stahlbaum’s party.  Doty harnessed their natural energy and mischief; and the result was delightful.

Even in her first appearance as Mrs. Stahlbaum, Lauren Frost (who also dances the part of the Sugar Plum Fairy) is magnetic. She had me at her first flirty smile to her husband and the disapproving side-eye she cast upon her ill-behaved guests.  Whether she is knocking those grand jetes out of the park, or deepening character and story with her subtle gestures and expressions, Frost is dazzling.

CU Ballet knows the power of an ensemble performance. Doty has cultivated a culture of trust and sharing that is essential in ballet, particularly in pairings such as Clara and the Nutcracker (beautiful danced by Isaac Lee) and later, with Frost as the Sugar Plum Fairy (see top photo) and Elijah Ochs, who brought both athleticism and elegance to his role as the Cavalier.

After spending intermission reading the programme and silently thanking the many generous donors, volunteers, and staff who made this experience possible, I was ready for the wonders of Act II. And from the Lemonade Sprites to the Ribbon Candy, the dancers did not disappoint.

One may ask how a classic like this remains relevant and fresh. The CU Ballet shows us how it’s done. After last year’s run, the decision was made to retire Mother Ginger and the Parade of Tea Cups. In its place we meet the Dutch Dairy Queen and her adorable baby cows. Inspired by yet another kind of performance magic made at the Stone Ridge Dairy, this addition brings a bit of our local Midwestern dairy culture into the mix, making it that much more special to the audience.This delightful sequence included a particularly clever detail. Clara asks the Dairy Queen for her scepter, which features a silver crescent moon. She lays the moon scepter down on the stage, allowing each of the cows to literally jump over the moon.

The Champaign-Urbana Symphony Orchestra’s perforrmance of the score was a true antedote to the leagues of television commercials which have ruined this music for many. The collaboration between CU Ballet and CSO is ideal. Together, with the excellent teaching of the CU Ballet’s sister ballet academy and the magic of the Krannert production staff, this “festival” is our arts community at its best. It brings together the power of education and mentorship, and the much-needed support from donors and families, with the steadfastness of an audience that shows up each year to gasp at gravity defying leaps and clap at cows jumping over the moon. Match this with an artistic director who stays true to the spirit of a classic while remaining open to new things. This right here is the formula for success.

Top photo from Krannert Center for the Performing Arts, others from the Champaign-Urbana Ballet