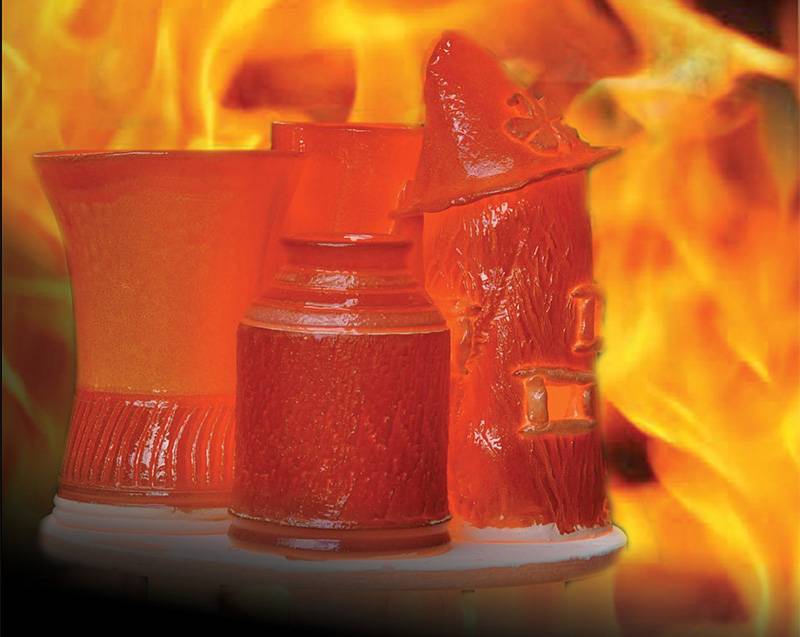 The CU Pottery Club is about to celebrate an important anniversary with the opening of “Clay & Fire,” a group exhibition at Art Coop’s gallery on Sunday, February 9th at 2 p.m. To learn more about this local treasure, its history and its secret to longevity, I spoke with club member and event organizer Cathy Cunningham. I hope our conversation inspires you to help celebrate their success, visit the exhibit, meet the artists at the opening, and maybe even get your own hands into some clay.

Smile Politely: Congratulations on the club’s 50th anniversary. How did CU Potters Club get started?

Cathy Cunningham: The University of Illinois had a very strong ceramics department in the 1960’s that generated a lot of interest in the community. A woman named Cathy McGuire
organized a meeting of interested potters in September of 1969 to explore the idea of
forming a pottery cooperative. Twenty people attended the first meeting at the Gregory
School in Champaign and voted to rent wheels from CUES (Center for Upgrading
Educational Services). The Champaign Part District agreed to handle the club finances
and CUES provided studio space in exchange for teaching classes. In February, 1970,
what was then called the “Champaign Potters Club” offered two, 12-week classes at the
Gregory School. The studio moved briefly to another location on N. Market Street
before moving across town in 1972 to affiliate with the Urbana Park District and become
part of the Thornburn Recreation Center, where it remained for 20 years. In 1992, the
building was condemned and the club was shuttered for two years until space was
negotiated with the Champaign Park District in the Springer Recreation Center. The
club continued to offer public classes in exchange for studio space. In 2009, the club
rented its own space at 900 S. Race Street in Urbana and has been self-sufficient ever
since.

SP: How has the club evolved over the years?

Cunningham: While the club has changed locations over the years, the governing structure of the club remains basically the same with an elected board of directors that are responsible for club decisions with input from the membership. In 1999, the club incorporated as a notfor-profit organization with official constitution and bylaws.

SP: For those unfamiliar with the group or your space, how does it all work?

Cunningham: There is a volunteer board of directors including five elected officers and committee chairs. All members are assigned to a committee and are expected to perform a
minimum of eight hours of volunteer service towards the operations and maintenance of the
club. Current committees include: cleaning, clay, glaze, firing and sales. Membership dues are paid every 4 months and this includes all clay, glaze & firing. Members are given a door code and have access to the studio 24/7. The studio includes pottery tools, electric wheels, a slab roller, a spray booth, over 20 glazes, three types of clay and one electric kiln firing to cone 6 (approx. 2170 degrees Farenheit).

SP: To what do you owe its continued success?

Cunningham: Without a doubt, the success of the club is due to the willingness of club members to step up and take on leadership positions. There are always some members that barely do the minimum required, but most people recognize the incredible value of having a
resource like this in the community and are willing to put in the extra time to keep the club operating. We have social events and workshops to promote community and members help each other out if someone has a question. Our monthly meetings include a “show and tell” where members can bring in a piece that they want to talk about – the good, the bad and the ugly. We all learn from each other’s successes and mistakes!

SP: There is something about the creation of ceramic art that is unique to the form. Perhaps bit is, as the exhibit title, “Clay & Fire, “infers, the alchemy of the two elements combined.bI’ve seen a growing interest in both the making of and the collection of ceramics,bfunctional and objet d’art. What do you think is the allure?

Cunningham: I think handmade ceramics are so much more interesting than pieces that are mass produced. With handmade ceramics, no two pieces are the same, no matter how hard
a potter tries to duplicate his or her work. Each piece is unique and reflects not only the
artist’s skill at constructing the form, but also his or her glazing technique, the characteristics of the glaze and the influences of the conditions in the kiln.

SP: What can you tell us about the Clay & Fire exhibit at Art Coop? What can we expect to see?

Cunningham: The exhibit will feature the work of 37 current and former members of the club with over 60 pieces on display, some of which will be for sale. While the CU Potters’ club is a
recreational ceramics cooperative, some of our former members have gone on to become professional or semi-professional potters with their own web and Etsy sites. The exhibit will also include a brief history of the club and guest book for visitors to record their impressions of the exhibit or memories of the CU Potters club.

SP: What do you think will surprise people the most about the work or the process of
working in clay?

Cunningham: Most of our work is done in a studio and fired in an electric kiln. Pieces are heated to over 2000 degrees farenheit, vitrifing (hardening) the clay and glaze as it cools in the kiln. Opening the kiln is like Christmas morning! Formerly drab-looking glazed pieces are transformed into beautiful works of art covered in combinations of blue, green, black, maroon, and white glazes.

The stunning photo on the exhibit poster was taken during one of the club’s raku firings.
Raku is very different because glazed pieces are removed from the raku kiln while
between 1470 – 1830 degrees farenheit. The glowing hot pieces are carefully placed in
a garbage can of newspapers and immediately enveloped in fire before the lid is placed
on the garbage. With no more oxygen, the fire eventually goes out, pulling oxygen
molecules out of the glaze as it smothers, creating swirling patterns of smoke and
metallic glaze.

SP: How was this show curated? What ties the pieces together?

Cunningham: We allowed any current or former member to submit up to two pieces for inclusion in the show. The pieces in “Clay and Fire” reflect the wide range of skills and subject matter from functional ware to sculptural pieces produced by our members.

SP: Chris Berti will be holding a free lecture the Monday after the Art Coop opening. Is there anything you can share with his talk?

Cunningham: Chris is a phenomenal artist who teaches ceramics and sculpture at Parkland College as a Professor of Art. He creates pieces that are shown and sold locally at the Urbana Cinema Gallery. In addition, he is a nationally known ceramic artist and sculptor with
pieces in the Smithsonian Museum, the Montreal Museum of Art and many other museums in the United States.

We are honored to have him present “The Poetics of Clay: Past and Present” on Monday, February 10th at 7 pm in Room A of the Champaign Public Library. This event is free and open to the public. Chris will be surveying select historical and contemporary work, focusing on expressive use of clay forming and surface techniques as well as form and content. The program will include many visual images and discussed with Chris’ enthusiastic teaching style.

SP: Is there anything else you’d like to add?

In addition, our studio at 900 S. Race Street in Urbana will be open during the Boneyard
Arts Festival, April 3rd and 4th, for anyone wishing to see our space and purchase ceramic
pieces produced by our membership.

Top image: Photo of several unfired clay sculptures set amongst a background of flames. Photo from the CU Pottery Club