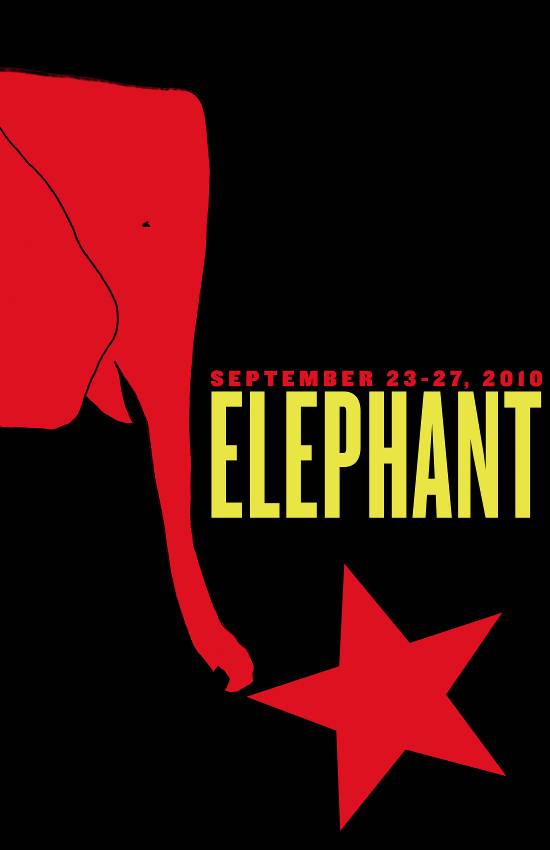 Let’s face it, there are a lot of events competing for your entertainment dollar this weekend. But Elephant, the second entry in Deke Weaver’s Unreliable Bestiary series (an “ark of stories about animals, our relationships with them, and the worlds they inhabit”), has several things going for it:

I spoke to Weaver, an assistant professor at the U of I’s School of Art & Design, by phone last week. “There are parts of it that will feel like a really low-rent circus, ” he explained.

“There are a lot of students involved in it on a lot of different levels,” Weaver continued. “There’s a six-minute stop-motion claymation thing, and these guys were building clay models all summer. Part of it’s just going to be the scale of the thing, how big it is, but the combination of low-tech and high-tech and the energy of the thing, it will be really fun.”

Weaver traveled to Thailand (where elephants are classified as livestock) to the Thai Elephant Conservation Center as part of the preparation for the show. “It’s supposed to be a mahout training course, where you train to be a mahout, but it’s pretty touristy,” Weaver noted. “I was trying to find different ways to see an elephant outside a zoo or outside the circus.”

There are ups and downs to the life of an elephant. “It was really exciting, but it was also really sad,” Weaver explained. “They just spent a lot of time chained up. I imagine a lot of farm folk are rolling their eyes at this, because they spend a lot of time with animals, but a lot of us don’t spend a lot of time with animals anymore, and these guys are so big and so expressive. You can tell when they’re bored out of their minds, and you can tell when they’re down. They spend all night with their front legs shackled. So that part is kind of hard to watch.”

Weaver tries to send a message without bogging down the momentum of the show. “When I turn on my water tap, I’m not necessarily thinking, ‘Where is this water coming from?'” he said. “It’s thinking about these sorts of things. The way we live now is not sustainable. That sounds really heavy-handed and really preachy, but the show is really light-hearted and fun.”

“Everybody’s trying to make a living, and that’s a big part of the show is balancing out the needs of humans and the needs of the natural environment.”

I’m not much of a theater buff myself, but the combination of theme and venue is really intriguing, and the price is right, of course. If you can spare half an evening this weekend, I suggest you give Elephant a try.