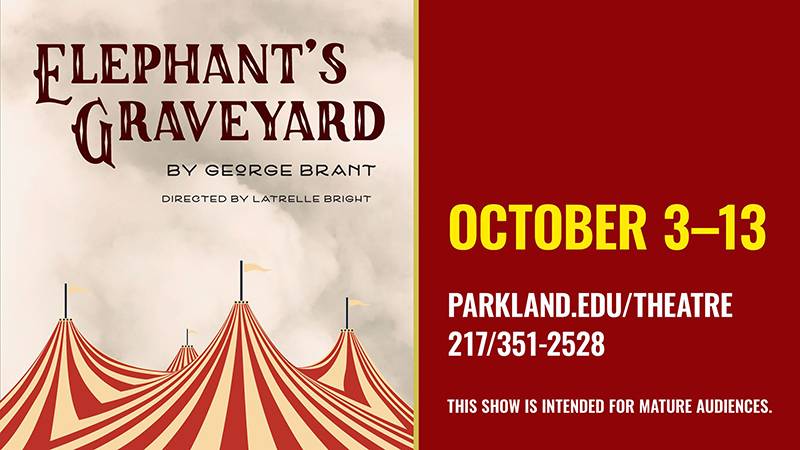 As recent shows such as Fun Home and Men on Boats have demonstrated, Latrelle Bright brings to life scripts that tackle difficult, albeit important, issues, and offer timely messages; messages that force audiences to challenge their own preconceived notions about their neighbor, and society as a whole.

Elephant’s Graveyard is no different. To help shed light on the show, Smile Politely spoke with Bright to discuss her experience directing the show, and the issues the show tackles.

Smile Politely: Could you provide a short synopsis for those unfamiliar with the show?

Latrelle Bright: The Sparks World Famous Circus had finally arrived! It rolled into the muddy humdrum town of Erwin in East Tennessee via the railroad carrying all the trappings of the spectacular—a Ring Master, a Ballet Girl, a Strongman, an Elephant on parade—and the town was filled with fervent enthusiasm. But, by turns horrific, the fervor turned in on itself when a tragic death lead to a staggering resolution in 1916 Americana.

SP: What initially drew you to the script/show?

Bright: What initially drew me to the script was an image of a Memphis production of the show.  A student at my alma mater directed it and it looked like my kind of show – bare stage, flexible set pieces serving numerous purposes. The storytelling nature of the writing was also compelling.  There is no dialogue between characters, only monologues and choral segments. It is intimate.

SP: As far as I understand, the show focuses on a struggling circus that is traveling and witness the horrific lynching of an elephant. Additionally, The Samuel French Company describes the show as being an exploration of “America’s deep-seated craving for spectacle, violence, and revenge”. How well do you think the show speaks to audiences in the wake of recent fights against animal cruelty in circuses? How do you think such a message relates to modern society’s penchant for reality television, talking heads, celebrity, violent media and so on?

Bright: It does speak to audiences but I want to be clear that this story is not about animal cruelty “within” circuses.  Nothing in our story depicts training methods of Sparks World Famous Circus but they had not yet, in 1916, developed PETA standards – training was cruel.  It began with capture in Africa (Mary was an African elephant), being shipped across the ocean to America and then enduring what amounted to torture to do tricks for the masses and provide labor for the massive circus enterprise.

Mary is a symbol for cruelty to life and what I believe the playwright does so well is dramatize how what we do to one we do to ourselves.   I believe there is a quote…Maharshi?.  Questioner: How do we treat others?  Maharshi:  There are no others.

And in this present moment when so many are asking, “How did we get here?” Well, let’s take a look at our history of violence and spectacle and revenge.

SP: Being a show about a circus and from seeing photos from rehearsal I imagine this a show that requires a lot of movement. Is this the case? How have you approached choreographing the movement and the particular choices you’ve made with the movement?

Bright: It can be a movement-based show but does not have to be. For me the movement is tied to the music or the rhythm of the piece.  Different playwrights provide different inroads.  In this case, George Brandt provides lyrics to a song with no sheet music and encourages whoever is shaping this piece to create their own melody for it.  I love that kind of freedom and it sets the tone for the show.  Then there’s a bit of deconstruction and using pieces of the whole in different ways throughout.  This is not all preconceived though.  Most of the ideas about the music came with discoveries during the rehearsal process.  I never start out with it wholly pre-planned.  One thing grad school taught me was how to trust the process.  In addition I usually have one or two really strong visual images at the onset that I incorporate and sculpt throughout the process as well.

SP: Do you feel the intimacy of the black box theater aids in telling the story of Elephant’s Graveyard?

Bright: Absolutely!  It’s in the round and only three rows deep so with direct address and proximity to the audience, there’s really nowhere for anyone to hide.

SP: What is the one reason the community should attend the show?

Bright: Fellow citizens have been working tirelessly on this show since August.