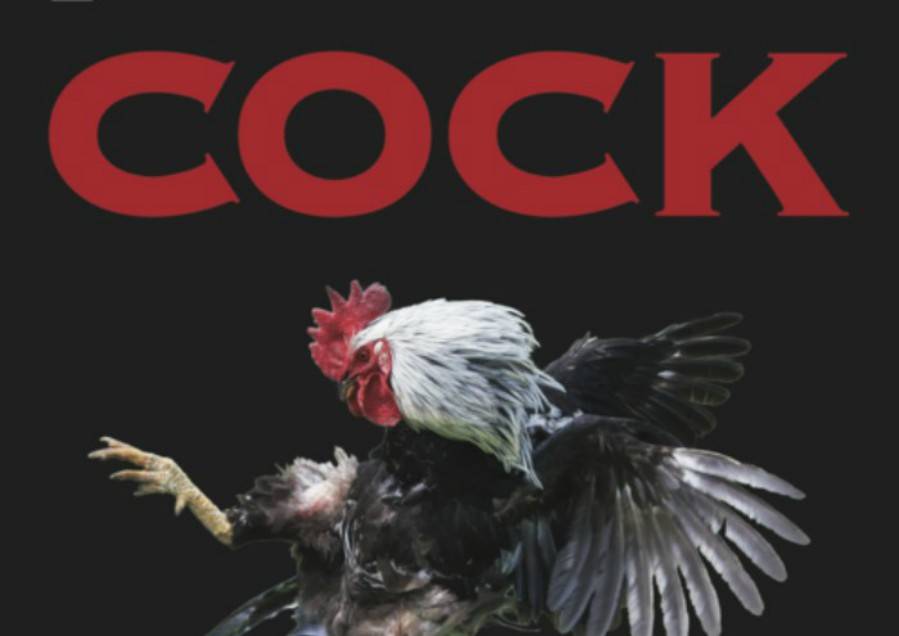 When I found out the Station Theatre was producing Cock by Mike Bartlett, I was intrigued.  Having learned about the play from a colleague of mine, I would never imagine that it would be performed in my area. Just from the title alone, the play is shocking. But what lies within the text is an exploration of sexuality and self.

I had the pleasure of sitting down with Cock Director Rick Orr, who also serves as the Artistic Director of the Celebration Company at the Station Theatre, to discuss this bold piece.

Smile Politely: From the title of the play and the image of an agitated rooster on the poster of your show, one could gather that this play might be about a chicken fight. However, from my prior knowledge about this play, I know this isn’t exactly the case. What is Cock by Mike Bartlett truly about?

Rick Orr: It’s about trying to find happiness, which we all strive for, either on a day to day basis or in long term relationships. It’s something that’s always present in our being, trying to be happy. The play focuses on a relationship and trying to find that means of happiness.

Two working metaphors are used within the play. There’s a cock fight, which is a fight to the end. The other working metaphor is a boxing ring. So from both of those metaphors, it’s a story about who is going to win.

In this particular play, the only character who has a name is John, the central character. The others are listed as W and M because it’s John who is in this triangle of trying to make a decision as to which or what kind of relationship he wants. You wonder along the way, and in the end you ask “Who is John? Does John really know himself?”

SP: What made you choose to tell this story?

Orr: What attracted me to the play is that it has no setting. It has no props. It’s acting on a naked stage. You’ve got to really trust the words of your character in the moment. It’s a hybrid kind of play, and I’ve never read one like it. There are no stage directions, there are just lines. There’s nothing for an actor or director to go on like in traditional plays by Tennessee Williams or Albee. It lends itself to be a creative process between director and actors. What attracted me to this, and I’ve been vassalating on this for two or three years, it’s quite a challenge.

SP: You have some of C-U’s most recognizable actors in your production (Lincoln Machula, Evan Seggebruch, Kimmy Schofield, and Coy Wentworth). What has it been like working with this all-star cast?

Orr: I am fortunate enough to have four brave, experienced, and very smart actors willing to take this journey with me. They have been very willing to go along with my concept. I hope my brain is leading them and the audience in the right direction. It’s an interpretation, and it’s live theatre.

SP: What audiences are you trying to reach with Cock?

Orr: I’m not sure that my mother would be interested in seeing this show, but I think it’s for modern audiences. That element of trying to find happiness in our relationships is important for all of us.

SP: What else have you previously directed for the Station?

Orr: The company is starting its 47th year soon and looking at past productions, I think I’ve directed over 120 plays and musicals, and that’s quite a few. I’ve done the traditional things like Who’s Afraid of Virginia Woolf and musicals like Sweeney Todd. I’ve directed four or five Sam Shepard plays including True West and a very early one called The Tooth of Crime.

The Station Theatre is a black box theatre. When it comes to choosing a play, I always ask myself, “What does the play really need?” Plays don’t always need the trimmings that bigger groups and Broadway can provide.

Orr: My reason for starting it as a graduate student at the University of Illinois in 1971 was because at the time, we were experiencing experimental theatre. Theatre was very different then. I was going to New York and seeing these experimental kinds of productions, and I wasn’t getting them as a college student. I decided to start the company and we were doing very modern pieces. It really started with the essence of “What is theatre truly about?” In class notes from graduate school, a professor had said that theatre should always be a celebration. Therefore, came the name the Celebration Company.

The Celebration Company has changed as well as theatre has changed. I’ve had the privilege of seeing hundreds of actors and technicians. Over 46 years I’ve seen talented people go from coast to coast and they keep in touch. And when the Station had the accident with the truck, I was getting emails and phone calls and people were donating because they remember and enjoyed their time and the Station Theatre. We’re a huge family. For those who have lost touch, hopefully they remember their days at the Station Theatre and left it hoping that it would still be there for 46 more years.

Orr: We’re in the midst of rehearsals and the pieces are coming together. I am looking forward to the experience of sharing it with a live audience.

The Celebration Company at the Station Theatre’s production of Cock by Mike Bartlett, directed by Rick Orr, is running from March 22nd until April 7th. All shows are at 8 p.m. with the exception of the 3 p.m. matinee on March 25th. For more information or to make a reservation, click here.