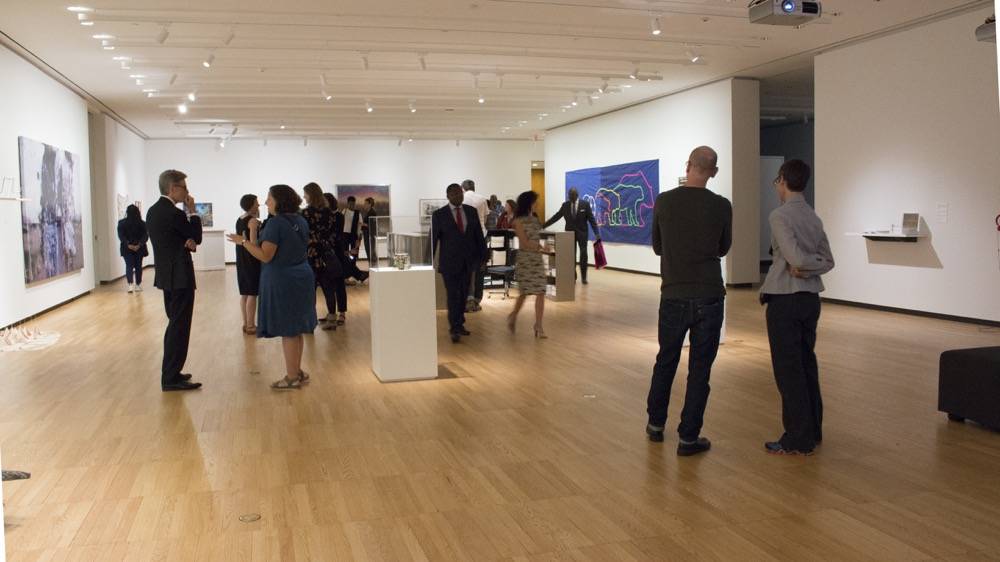 There is a slight chill in the air, and while the natural world prepares to go dormant in the colder months ahead, Champaign-Urbana’s art scene is in the process of rejuvenation. Several new art exhibitions have opened recently, including a whole new slate of curated exhibitions at the Krannert Art Museum: Coveting Nature: Art, Collecting, and Natural History in Early Modern Europe (through December 22), Propositions on a Revolution (Slogans for a Future) (through December 22), the 2017 School of Art + Design Faculty Exhibition, and the piece de resistance, World on the Horizon: Swahili Arts Across the Indian Ocean (through March 24, 2018). I went to the gallery’s opening night reception on August 31st to investigate.

As you may or may not be aware, World on the Horizon is a big deal. With the support of a major grant from the National Endowment for the Humanities, curators Prita Meier (assistant professor of Art History at New York University) and Allison Purpura (senior curator and curator of Global African Art at Krannert Art Museum) have put together an exhibition that features over 150 artworks from public and private collections spanning four continents; and the first ever major traveling exhibition of art from the Swahili coast. KAM is only the first stop for the exhibit, which will travel to the National Museum of African Art, the Smithsonian Institution in Washington, D.C. and the Fowler Museum at the University of California, Los Angeles, in fall 2018.

World on the Horizon: Swahili Arts Across the Indian Ocean

World on the Horizon: Swahili Arts Across the Indian Ocean

Due to its location at the crossroads of a trade network that spanned the Indian Ocean, the Swahili coast has been a rich site of cultural exchange for Millennia. As such, the objects in the exhibit showcase not just technical artistry but the continuous hybridization of culture and ensuing aesthetic innovation. On display are gorgeous illuminated Qur’ans, posed studio photographs from the 1960s that employ whimsical photo-manipulation techniques, elevated wooden sandals, and hand decorated bicycle mud-flaps with sayings like “Mambo Poa Rafiki” (“all’s cool my friend”). While I gravitated towards more modern objects the first time around, there’s so much to see that the exhibit warrants multiple visits. You can also take advantage of a number of talks and workshops organized around the exhibition this fall.

Speakers at opening night included the two curators, Kenyan Ambassador to the United States Robinson Njeru Githae, Chancelor Robert Jones, and several representatives from the National Museums of Kenya. Together, they painted a picture of the exhibit’s development. Meier and Purpura explained how the project that they originally thought would take a couple of months when they first hatched the idea over beers at a Champaign bar grew to span five years. Dr. Mzalendo Kibunjia, the Director General of the National Museums of Kenya, described the curators’ persistence as, “for three years they bombarded me with messages trying to get the materials out of Kenya,” and we learned that the National Museums of Kenya rarely lend objects. Their statements communicated the value of lasting relationships and connections across national borders, as well as the great deal of blood and sweat that no doubt went into putting the exhibition together.

Coveting Nature: Art, Collecting, and Natural History in Early Modern Europe features botanical and entomological prints and illustrated publications from the early modern period. These prints (many of them by female artists) speak to an era when Europeans scrambled to catalog anything and everything with increasing levels of detail and accuracy using rapidly improving printing and distribution technologies. While the prints present a technical feat for the time period, I loved the human touches. One artist consistently lets his images obscure the classifying label; one chooses to depict a fly as a magnified monster, filling up an entire page and staring back at the viewer with globe-like eyes; one dutch artist depicts a bouquet that is “in fact a clear fiction,” with flowers that bloom in different seasons and at different times of day. Also on display are contemporary prints made in honor of Maria Sibylla Merian, a famous naturalist — including one by UIUC Art + Design faculty member Emmy Lingscheit. An untitled print by Emily Arthur — a tiny beetle in the middle of a large page with “Emily” written in cursive just above it — perfectly encapsulated for me this hilarious human tendency towards personal expression even when attempting complete objectivity.

The 2017 School of Art + Design Faculty Exhibition also addressed the theme of nature, albeit from a different perspective. Ecological apocalypse scenes, fish stuck in plastic packaging, and a speculative timeline predicting flooding and mass exodus from the U.S. coasts by the year 2020, all have their place. Although this year’s exhibition feels smaller than last year’s, I appreciated the opportunity to see how the faculty’s work has developed. I found a new appreciation for Emmy Lingscheit’s print depictions of impossible semi truck pile-ups with objects like amazon boxes and chickens strewn over the road when I made a connection between the temporary avoidability and eventual inevitability of both pile-up accidents and ecological disaster. Laurie Hogin’s brightly colored paintings of eerily sentient birds, rodents and lizards continue to speak to me.

Propositions on Revolution (Slogans for a Future)

I found Propositions on a Revolution (Slogans for a Future) to be the least accessible new exhibit, and regrettably it was the last one I passed through on my tour of the museum. Propositions on a Revolution invites artists to think broadly about how revolutions work, on the centennial of the Russian revolution of 1917. Most of the art in this exhibition incorporates or is entirely composed of video. By the time I made it around to this gallery, I’ll admit I was slightly exhausted, so I found myself completely mesmerized by Los-Angeles based artist Jennifer Moon’s video, “Jennifer Moon on Revolutionizing Revolution,” which is projected against a dark wall in the space between two galleries. This is essentially a fake TED talk; Moon gives a presentation about self-acceptance as the basis for revolution, standing authoritatively onstage in a fanny pack while her pet pomeranian lounges in the background. The powerpoint she uses features some word art that you sense wouldn’t make it into a certified TED presentation. Although I couldn’t tell if Moon’s message was sincere or not, the somewhat perverse pleasure I got from seeing this ubiquitous format parodied was the perfect end to my Krannert experience.

In conclusion, the Krannert Art Museum is one of our campus’s gems, and these exhibitions are unmissable. Just don’t try to see them all in one day (and if you have some valuable insights about Propositions on a Revolution, let me know)! KAM is open from 9 a.m.-5 p.m, Monday through Saturday. Admission is free.