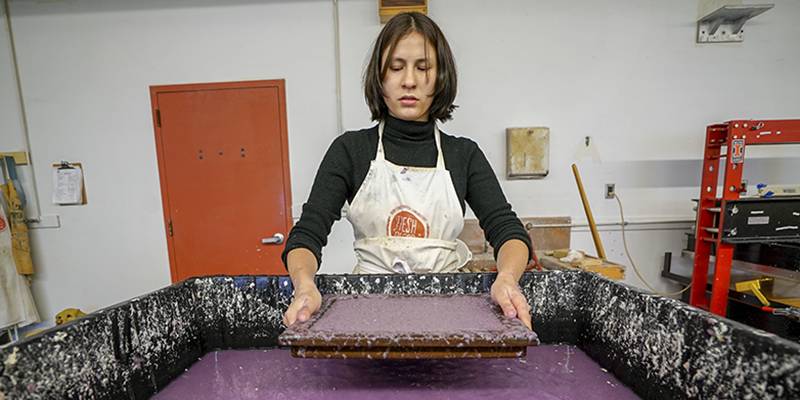 Recognized for creating sustainable agri-fiber paper, Fresh Press sources harvest waste locally from the Sustainable Student Farm and uses seasonally available plant fibers for papermaking. Leading by example, Fresh Press aims to change the paper supply chain from forest to farm. Fresh Press has made over 10 types of paper using harvest waste such as rye, sunflower, and coffee. Sielaff, a third-year student at the University of Illinois at Urbana-Champaign, studies New Media with a minor in sustainability. As an artist concerned with the well-being of the planet, Sielaff’s interests perfectly intersect with Fresh Press.

“I’m an art student, so for most of the stuff I do, I need paper, and instead of using the toxic, nonrecycled paper for my work, Fresh Press paper is an easy and fun way to be more sustainable about the art I make,” Sielaff said.

Despite her position as Studio Manager, Sielaff has not had much experience with papermaking before her position as Studio Manager. Sielaff’s introduction to papermaking began her freshman year during a workshop held at her dorm led by Drew Mattot, founder of the Peace Paper Project. Sielaff says the process she did then was much less meticulous and wouldn’t be up to Fresh Press’ standards.

“Now that I’ve been making paper for a while, when I look back I think about how shitty the paper was that I made,” Sielaff said.

A year after her dorm’s papermaking workshop, Sielaff was invited to Fresh Press by two of her friends that worked at the studio. After her first visit, Sielaff was determined to make paper and become the Studio Manager. “I just literally bugged Eric Benson until he let me start making paper here,” Sielaff said.

Now with two semester’s worth of papermaking practice, Sielaff still considers it a difficult practice. “It’s kind of like screen-printing, if you mess up on one stage, you’ve blown out the whole process, and that’s the same thing with papermaking,” Sielaff said.

According to Sielaff, papermaking at Fresh Press takes “a whole lotta time.” After harvesting plant waste from the Sustainable Student Farm, the papermaking process consists of six steps:

1. Chipping – Placing harvest plant waste through chipper machine.
2. Cooking – Boiling chip fibers.
3. Beating – Placing cooked fibers through a beater machine.
4. Pulling – Taking the fibers and forming them into a sheet.
5. Pressing – Squeezing out water from the sheet.
6. Drying – Removing any extra moisture from the sheet.

Aside from harvesting waste locally from the Sustainable Student Farm, Fresh Press also practices other forms of sustainability in their six-step process such as utilizing a greywater system, which recycles the water Fresh Press uses. “Having a greywater system means that all of our water is being reused,” Sielaff said. “So, the water being pressed out of the sheet would be reused again.”

In addition to utilizing a greywater system, Fresh Press also practices sustainability by recycling their paper and paper trimmings back into new paper and using an electric chipper.

Regardless of Fresh Press’ lengthy papermaking process, Sielaff continues to appreciate its commitment to sustainability and considers the practice therapeutic and enjoyable.

Sielaff says, “Pulling is my favorite part because it’s fun and you get to feel the weird texture of the paper.”

While discussing her successes, such as creating lavender/rose-scented paper, Sielaff stresses she has not yet mastered the art of papermaking. Despite a year’s worth of practice, she still has some difficulties. In particular, she says that aligning the sheets properly on the press is the most difficult part because if done incorrectly, the sheet could be “blown” out. When sheets become “blown” out, they expand at the sides and lose their shape.