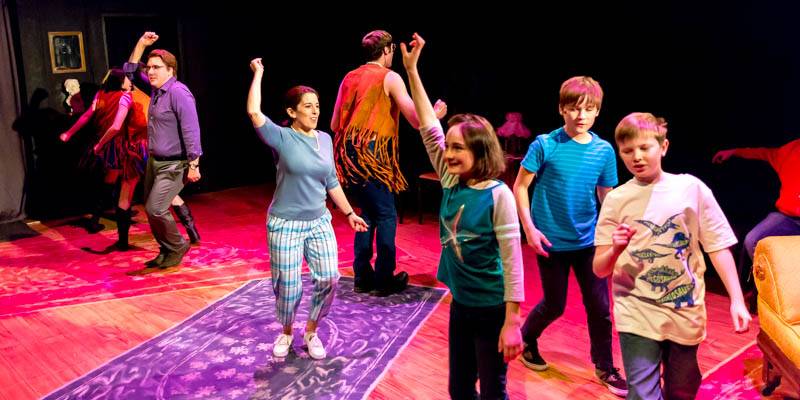 How can I be expected to write a review when I can barely see through all of these tears?

The general rule of thumb for art is that art is subjective. What may be astounding to one person may be elementary to another. What one person deems ugly, another finds beautiful. There are moments, however, when art steps outside the bounds of subjectivity. Those who create art, including filmmakers like me, work tirelessly to achieve these moments when their art touches and moves souls at the deepest level possible.

Such a moment was achieved with the Station Theatre’s production of Fun Home.

Following adult Alison Bechdel as she creates her graphic memoir of the same name, we experience her self-discovery through intricately woven together memories of her childhood and freshman year of college. On the surface level, Fun Home is a wonderful yet tragic story of self-discovery filled with charming characters and even better music, but it is not a simple coming of age story. Much like the Bechdel family, there is more to be discovered when you dig deeper.

There is an interesting experience when we, as adults, discover the gulf that exists between the person we were and the person we’ve become. Even more astonishing is how our understanding of our parents shifts when we wear the lenses of adulthood.

This was all on display in Fun Home as the story of a complex group of characters was told. And this was made possible only by the superb direction and the superb performances of the cast.

The performances Latrelle Bright brought out of her cast clearly came from an intimate study of the characters and the complexity of their emotions and experiences. There was a moment after one of the final numbers had finished and the lights came up for a new scene to begin, where I looked up, and Jenny Gleason was wiping tears from her eyes. Tears that were clearly not part of the performance, but from her own emotional connection to the characters and to the story. Such a dedication from Bright to push her cast, even when tackling such a raw and emotional story, to embody the story in such a manner shows the genius of her artistry as a director. This was my first show directed by Bright, and from here on out I will rush to anything directed by her.

I attempted to pick a single performance, whether song or scene, that stood out from the rest. Frankly, it was a fruitless attempt with this show. From the opening note sung by young (and surely very soon to be) bright star Eve Foley (Small Alison) to the final heartbreaking note from the trio of Alisons (Jenny Gleason, Jess Schlipf, Foley), Fun Home was a journey through a myriad of emotions.

Michael Steen, who normally plays over the top characters (re: Spamelot) showed his range by offering a controlled performance of an unraveling man. It became obvious quite quickly that Bruce was a troubled, complex man who attempted desperately to keep his internal war at bay through obsession with perfection. He became a man that continued to chase after his true self but, unlike Alison, was never able to find it. Steen was stunning, moving, and sublime.

Jacki Loewenstein as Helen Bechdel—a woman that I believe loved Bruce at one point but found herself wrapped up in maintaining perfection for him and the charade of the marriage for so long that she could not find a way out—was a very purposeful and restrained performance that beautifully displayed Helen’s attempts to remain stoic while emotions fought to be released. There were moments when Loewenstein was on stage and, without any lines, I could see how torn Helen was between maintaining Bruce’s desired perfection, the pain she felt for her children, and the despair she felt for herself.

Although the three Alisons gave incredible individual performances—Gleason’s joy and turmoil reflecting on her life, Schlipf’s anxious and nuanced delivery of the whirlwind of self-discovery that occurs as one crosses the threshold into adulthood, and Foley’s limitless wonder and willingness to push back against Steen’s Bruce–there is something to be said about their ability to work in unison as one character. Portraying a character, in of itself, is a difficult task. But to portray a character along side two other actors is a much more daunting task. One must not only study one’s character, but also one’s fellow cast members, understanding each other’s mannerisms and quirks enough to become the same person.

Vacketta Herzog, who played one of my favoriet characters Joan, brought a funny, open-minded counter to Medium Alison and became the hand she needed to guide her to self discovery and accepting her own self.

Although tasked with playing several characters, Cody Jacob’s performances were distinct enough that they did not overlap each other and served important purposes in moving the story along: moments of joy in an otherwise stressful home and the mistakes that sped along Bruce’s unraveling.

Dema Evans and Joseph Solava as younger brothers Christian and John also offered a joyful balance to the stressful environment of the Bechdel home, and some of the great comedic moments in the entire show. Solava’s triumphant emergence from the coffin was a rather memorable moment.

If I was asked to choose my favorite part of this show, I would offer this answer: the powerhouse vocals of Michael Steen and Jess Schlipf, who have this magical ability to make you feel everything they are feeling with every single note they sing.

And of course, this review cannot be completed without praising the music direction of Noah Scott Larson and his fellow musicians in the pit. Without their excellent artistry, I’m unsure whether the show would have been as powerful.

Filled with beautiful music and powerful performances, Fun Home is a show that makes your heart swell, breaks it, mends the broken pieces, and then breaks it all over again. But in the end, it’s a beautiful show that anyone who has faced family turmoil, the internal struggle of self discovery, and learning who your parents truly are can relate to.

Fun Home is playing at the Station Theatre until Feb. 3. For tickets and more information, click here.