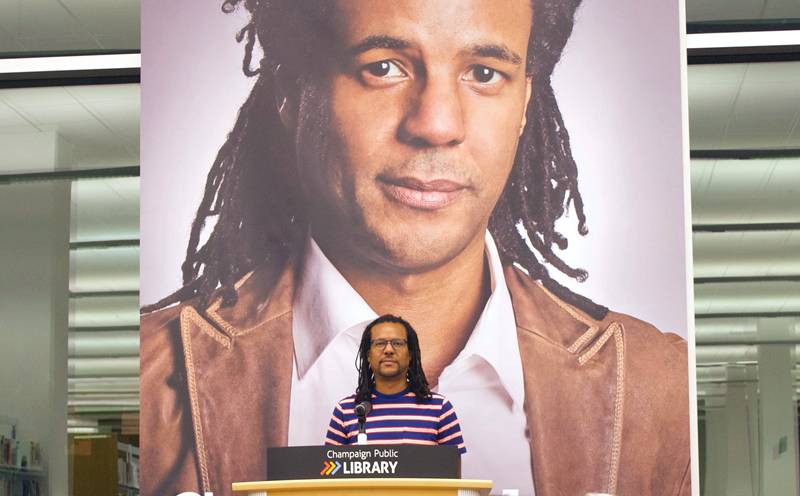 Colson Whitehead, an actual genius, Pulitzer Prize, National Book Award winning author (among other accolades), gave a talk at the Champaign Public Library last night. When I first saw he was visiting, I said something like, “What!? How’d they manage to get him?” The New York Times Bestselling author’s 2016 The Underground Railroad was a massive success, but Whitehead is the author of many more books that are now (hopefully) getting a little more attention from readers.

Whitehead’s visit was part of the 2018 Great Authors at the Library series, and hosted by the Table Talk book club (going 16+ years strong!). The Library Foundation and Library Friends helped provide funding for this event.

The lively crowd included a wide variety of people. Some people came with friends, partners, and children; it was a full house. The excitement was palpable, but as soon as Library Director Donna Pittman stepped to the microphone to introduce Whitehead, you could hear a pin drop.

I wasn’t quite sure of what to expect from his talk: Would he do a reading and then take some questions from the audience? Would he tell us all the gritty details of researching and writing? Though I’m no aspiring literary genius (obviously), there’s this thing that people say about meeting one’s idols…

Whitehead’s talk was charming, funny, quirky, and full of self-deprecating humor. The first part of his talk was an abbreviated story of his path to writing and to his current successes. He talked about his first rejections, and of the compulsion (or acquiescence) many creative people feel to make their work. He played a bit of Donna Summer’s “MacArthur Park” to underscore this point; with wit and humor, he talked about that song as an “investigation of the artist’s journey.” He then began to talk about The Underground Railroad.

The Underground Railroad is a work of fiction that follows Cora, an enslaved woman living in Georgia, on her travels to freedom by a literal underground railroad system. It’s an intense, beautifully written book. If you haven’t read it, please do.

In talking about The Underground Railroad, Whitehead shared that he initially had the idea for a book about an actual, literal underground railroad in 2000. He stewed on the idea over a decade before researching and writing in earnest. After reading a passage from the novel, he closed his talk by preemptively answering some frequently asked questions: Why did you choose to use a woman as the protagonist of your book? Why write about slavery? What are you up to next? In his responses, Whitehead again used humor to nod to the superficial and silly nature of some of these FAQs, and point to the ways in which our society values some stories over others. In an amazingly diplomatic and witty manner, he observed and mused on the false ubiquitousness of stories of slavery, a centuries-long institution, the actual ubiquitousness of stories of World War II, a six year long engagement (take for example, the two movies about Dunkirk released last year). The talk closed with questions from the audience, and then basically the entire audience lined up in the lobby to get their books signed.

Sometimes I see events and lectures on Facebook and am immensely disappointed to realize that they are elsewhere, in larger cities, or at institutions of higher learning that appear to value the humanities a bit more rigorously than our local institutions. On this occasion, Champaign was the place, and more specifically, my library — our library — was the institution to bring this badass brilliant mind to the community for free. Champaign Public Library will bring other badass brilliant minds to the community for free as part of the Great Authors at the Library series: Luis Alberto Urrea and Nnedi Okorafor. Additional information about those visits is available on the library’s website.

If you haven’t read Colson Whitehead, you must. If you don’t visit and support the Champaign Public Library, you must.