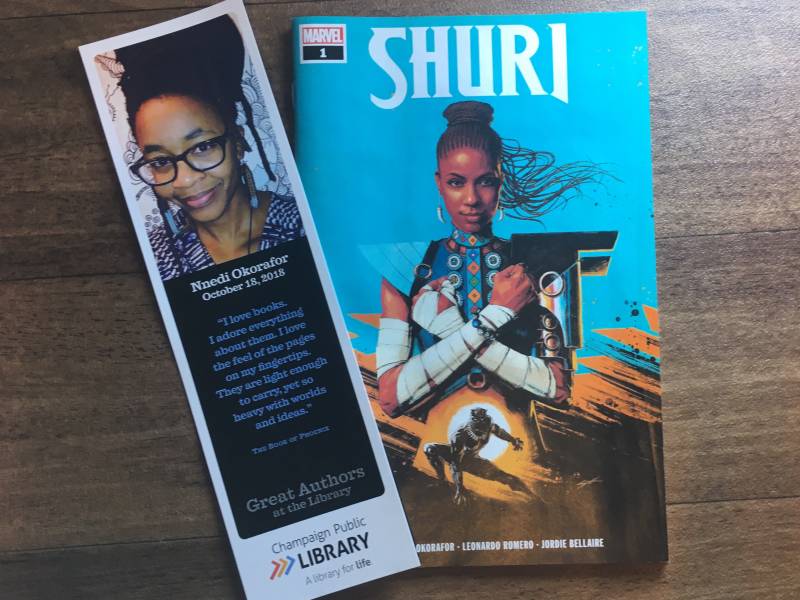 Nnedi Okorafor spoke of her journey of becoming a writer, Africanfuturism, and of course, her love of bugs as part of the Great Author series at Champaign Public Library. On October 18th at 7 p.m. the long line of waiting people had arrived into the space to find a Shuri comic on every seat. Before the talk, people sat reading the comic and a child sitting in front of me boasted about how quickly she could read a 3 book series. Enthusiastic readers waited for their chance to listen to Nnedi Okorafor read selections and talk about her life and her work.

Nnedi Okorafor, a Hugo and Nebula award-winning author, has written both comics and numerous novels and novellas for middle school aged through adult readers. Born to Nigerian immigrant parents in the United States, she was able to see from a young age two very different worlds. There was her world growing up on the south side of Chicago, littered with racism and racial harassment, and the world she saw when her family travelled back to Nigeria. There, things were different: She was surrounded by people who shared her background, but things like electricity and running water were not available due to lack of infrastructure. She realized from a very young age how diverse the world and experiences of reality can be.

As a child, she loved bugs, and credits that to her becoming very observant from a young age. In Nigeria she was careful to always be listening. As she listened, she would pick up stories and whispers of tradition that she may not have been privy to in without eavesdropping. In addition to these whispers, she was influenced by the culture and traditions she observed. Some traditions, like masquerades, both caught her authors eye and piqued her interest when she realized things like, how only men could participate, or that to ask questions about the secret society that donned the traditional costume wasn’t allowed. For her, she was both an insider, able to experience the culture first hand, and an outsider, not steeped with the same fears of writing on various aspects of what she learned and saw in Nigeria.

When she began writing, she pulled both from within and without. Her first works she refers to as “African jujuism,” featuring things from cosmologies and beliefs she witnessed in Nigeria. Later, she began incorporating different ideas and writing Africanfuturism — a genre she distinguishes from Afrofuturism. Moments of inspiration for this genre came from Nigeria, seeing what may appear to people from the United States as discordant images. She would see women carrying water jugs on their heads back from the stream to provide water for their households, holding their cellphones away from their bodies in order to not get them wet. It was these moments, not reading science fiction, that compelled her to start weaving more technologies into her work. She found Western science fiction inaccessible. In most science-fiction books, the worlds seemed to be ones where her existence wasn’t even possible. Even depictions of Africa as a whole were devoid of truth. Africa was either represented as a homogeneous country, as somewhere outsiders travel to, or depicted as somewhere where people still live in the past.

Nnedi Okorafor wrote the stories she wanted to read. Throughout the talk, it was clear that she likes to have fun in her writing. When speaking of a comic she wrote for Venomverse, an anthology of Venom comics, she said she made the character shapeshift into a grasshopper — partly because she wanted the artist to draw a grasshopper. Her new comic, LaGuardia, which she credits as being the weirdest thing she’s ever written, was first inspired by problems with LaGuardia Airport TSA agents. But, she also spoke of the effort she puts into her work. Her book Who Fears Death took six years to write. Originally a two-book volume, she was instructed by her agent to cut it down to one novel. She would take the pages of her manuscripts, out of order, and look at every single word, finding places where a few weak words could become a single strong word. Between this and cutting out unnecessary inner thoughts from her characters, she was able to take her tome and create a tight, clean novel.

During her readings, Nnedi Okorafor was practiced and polished, infusing her voice and facial expressions with emotion. She said she loved storytelling, and was good at it, and she was right. When she spoke of her life and work, her tone was completely different. Often laughing as she spoke, or speeding up her cadence when she grew excited, it was like hearing a friend talk. She would jump from one topic to another, go off on tangents, and then forget where to pick back up. Before attending, I had read her novella, Binti, winner of both a The Hugo Award for Best Novella and The Nebula award. After attending, I’m ready to pick up more, and I’m starting with Lagoon, the book she credits as being the weirdest thing she had written before LaGuardia. What can I say? I like weird. When the young audience member asked during the Q and A “are you naturally awesome?” and Nnedi Okorafor answered, “yes I am,” I was already a believer. But, you don’t have to believe me. Listen to a livestream of the event on the library website.