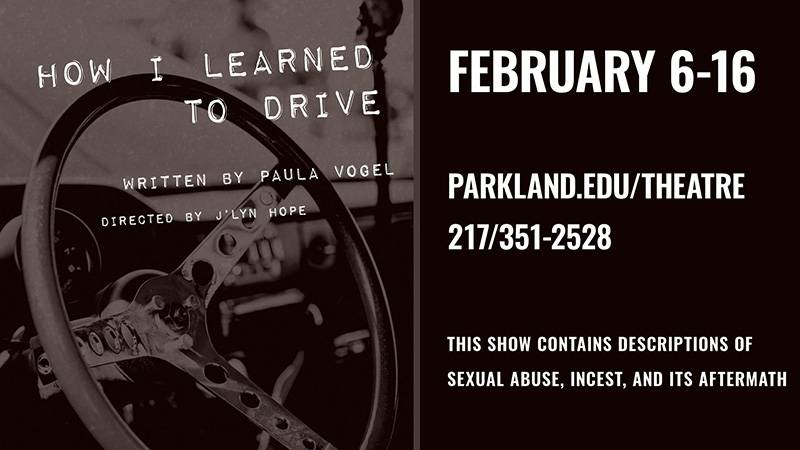 Walking out of How I Learned to Drive that was the only thing I could mutter.

HILD, from open to close, bombards the audience with incredibly heavy material. And to be completely frank, this is material unsuited for the faint of heart. The adult content warning is well-warranted, and should be heeded, but know that it is not adult content for the sake of shock and awe.

To make sure of survivors the same abuse or sexual assault depicted in the story are aware, that adult content is sexual assault, domestic/sexual abuse, incest, misogyny, and sexual harassment. And it is a heavy dose of it.

Due to Paula Vogel’s intentional writing, each and every difficult, heartbreaking moment serves a purpose in telling the story. But, to point out the obvious, without a dedicated cast, crew, and director said writing would remain just a script.

Parkland Theatre’s student production — for those that are not familiar with the student productions, every year the Theatre program produces a show entirely put together by a student director, student crew, and primarily student cast — of HILD did not remain just a script. It was a show filled with performances that shined a light on the tragedy, trauma, and pain of all of the above mentioned abuses and experiences.

Before delving too far into these performances, and the work of student director J’lyn Hope, I must applaud the Parkland Theatre program (especially under the guidance of Brian Morgan and HeatherAnn Layman, and fantastic faculty advisors) for allowing such difficult and important shows to be chosen. HILD joins a growing list of bold choices they have made the last few seasons.

Outside of the complicated material, HILD was quite simple. Sound design was straight-forward and executed well, and whoever compiled the playlist of songs made damn good selections. Other than a cast member who voiced the narrator of a driver’s education tape stating dates when the story transitioned, the songs played on the car’s radio did a superb job of bringing the audience into the era of each transition.

J’Lyn Hope’s direction was excellent. All movement had a purpose behind it. This allowed the story to unfold without distraction, and made the audience focus on what was said. Most importantly, she allows her actors to breath and gives them the room to bring their characters to life. Hope’s ability to foster the cast’s creativity and nurturing their ability to embody the characters rather than squeezing a desired result out of them. This is a student director that has a bright future.

First and foremost, I must commend Haylie Denzer (Lil’ Bit) for taking on such a complex, challenging role. While it is important to tell Lil’ Bit’s story, I cannot imagine the toll telling the story must take on an actor. The grace and courage with which Denzer helped Lil’ Bit’s voice be heard was remarkable. As was the manner in which she navigated the various stages in Lil’ Bits life. HILD jumps both forward and backward in time through Lil’ Bit’s life; mostly during her adolescence, teen years, and briefly during her adulthood. Denzer does a terrific job adjusting her portrayal of Lil’ Bit based on her age within the scene.

It is difficult to speak of Thomas Fitch as Uncle Peck. Perhaps that says a lot about his performance. Uncle Peck is not a good a person, and that is putting it lightly. I am sure Fitch had a difficult time digging into such a despicable person. It’s not easy playing someone so easily loathable, but he does it incredibly.

As a juxtaposition to the difficult interactions betwee Lil’ Bit and Uncle Peck, we see Lil’ Bit’s formative experiences with her quirky, but downright toxic family. These moments are when Lil’ Bit has misogny, victim blaming, and harassment engrained into her. All the cast members are able to effectively show bothd sides of their character: their loving side (or at least what they think is loving) and their rather toxic side that perpetuates harassment and an environment that allowed the abuse to occur.

In partiuclar, Sean Kelly’s over the top comedic delivery as Grandfather goes over really well as it does not come across as endearing, but shows how horrible and disturbingly misogynistic his nature can be.

Additionally, Emma Durantes (Mother) and Kylie Moubry (Grandmother) clearly play both women as characters who deeply care about Lil Bit, but have been impacted badly by the misogyny and harassment that has been deemed normal in their family. And do so well.

I left heavy-hearted, but impressed by this production. It was an outstanding character study that brought to light devastating, horrible experiences of its protagonist by effectively focusing on the impact of the abuse rather than focusing too much on the abusive acts. Don’t get me wrong. Those acts are depicted, but Hope blocked those moments well without losing the emotional effect.

In the end, do see this show. Support students’ efforts. But know it will not be a light-hearted evening of theatre.

Tickets can be purchased here.

Top image: Black and white photo of car interior and steering wheel, with the play’s title and a warning that the play contains descriptions of sexual abuse, incest, and its aftermath. Image from Parkland Theatre’s Facebook event page