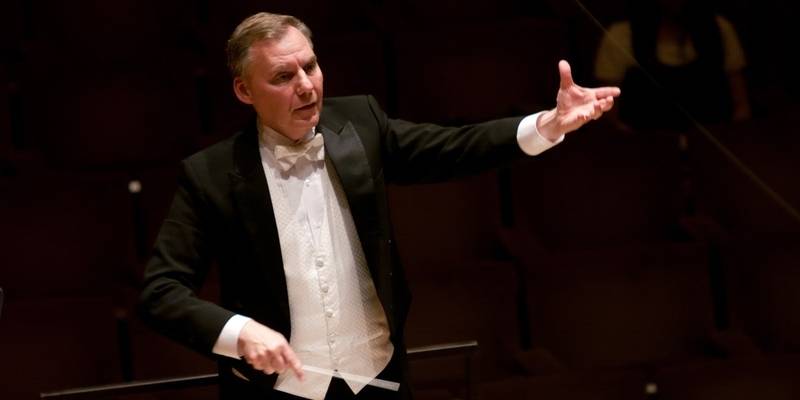 A couple of weeks ago, the conductor of the University of Illinois Symphony Orchestra, Professor Donald J. Schleicher, was invested. The first question you might be asking is “What does it mean to be ‘invested?” As I learned at Sunday, May 13th’s event, this is a formal bestowing of honors upon that person. The procedure generally entails a speaker list, along with a granting of some type of material award or trophy. After the event’s completion, the honoree will carry an honorific title such as “sir” or “dame.”

I was privileged to attend the investiture of UIUC Conductor and Professor Donald Schleicher to the Daniel J. Perrino Chair in Music.

The late Dan Perrino wore many hats at UIUC. He was a professor emeritus of music, Associate Dean of the College of Fine and Applied Arts, Dean of Campus Programs and Services, and he was a recipient of the Chancellor’s medallion, among other titles. However, Dean Perrino’s most visible community legacy is the establishment of UIUC’s beloved “Quad Day,” which he organized to heighten student concerns during years of civil unrest. Perrino also helped establish Project 500, the Black Chorus, La Casa Cultural Latina, and the African-American Cultural Program.

The Daniel J. Perrino Chair was endowed by Sheila Johnson, a former mentee of Perrino, now a successful entrepreneur and philanthropist.

Johnson spoke glowingly about Perrino, detailing how he had inspired her to become the person she is today. She described feeling lost on the campus as one of only 100 black students at the time, but noted that Perrino took her under his wing and made a place for her in the Music Department. Johnson was the first black cheerleader at UIUC, and she would go on to found “BET,” which she hoped would become the TV version of Ebony Magazine. Johnson is currently the owner of three professional sports teams, and in 2010, was appointed to the President’s Committee on Arts and the Humanities by President Obama.

Johnson and UI Chancellor Robert Jones both emphasized that this chair position is a tribute to the treasured professor-student relationship, a point the Chancellor articulated the weight of by saying “we’re in the business of putting the power of ideas into the hands of our citizens.”

In honor of his new appointment, I asked Professor Schleicher to answer a few questions about his career as a conductor.

Smile Politely: You’re originally from Wisconsin, and growing up you weren’t classically trained. What sparked your passion for classical music?

Donald Schleicher: Although you’re correct that I wasn’t really classically trained in the true sense, I did have an influential high school director that was serious about music and the band culture. His mentorship led me to choose music as a career.

SP: You’ve conducted orchestras at every level, from student to professional. What are some of the different challenges you face with leading ensembles with very different levels of expertise?

Schleicher: Practically speaking, orchestras of all ages and experiences use the same set of notes and the same set of rhythms, so really there is no difference in how one conducts the various levels of orchestra. That said, when I conduct professionals, they have little or no problems playing anything, so if there are any problems, they’re mine — that is, the conductor’s. But when one conducts less experienced musicians, you have your own problems and you have their problems. The famous conductor, Pierre Boulez, once said to a roomful of aspiring conductors, “never conduct student orchestras, because then you have your problems and you have theirs.” Mr. Boulez, however, lived not in the real world, but in the very elite upper echelon of the profession.

SP: Last November, you guest conducted in Nairobi, Kenya. Could you tell us a bit about that experience?

Schleicher: It was a unique orchestra in that it was a wonderful mix of experienced paid professionals and amateurs with very little experience. Although they were all “grown-ups”, they were of such varied experience that it was a bit like conducting professionals and students simultaneously. But if the conductor is wise enough to approach first the music, and second the ensemble, then there is no problem. In the end, it was a testament to the reality that music is indeed the “international language”.

We rehearsed and gave two performances of a program that included Beethoven Symphony No. 7 on the other side of the Earth and in a completely different culture, but the notes and the rhythms and the methodology of conducting Beethoven — all the same! I also found, in this particular case, that the audience constituency was more appreciative of the artistic product than some in the U.S. or Europe. Both concerts filled the hall with enthusiastic and very, very appreciative listeners. From that end, the result was a bit more exhilarating than the average concert that I give in America.

SP: When you enter the stage to conduct, you are known for briskly walking to the podium and beginning the piece immediately. What is the reason for this?

Schleicher: To me the concert begins when the conductor walks out, and not as the music begins. To that end, and in an effort to set the correct mood, I will pace my entrance to that of the opening measures of the first piece. If the first piece begins quiet and slow, then my entrance will reflect that kind of spirit. It does happen, however, that many programs start in an “attention grabbing” mood, thus the brisk walk. I admit that I’m not a big fan of the “normal” or “formal” elitist start of concert. “Let’s get on with it,” seems more like a cymbal crash welcome to the listener. I also believe, but don’t know for sure, that the orchestra musicians will perform better if the mood is set in advance.

SP: Conductors, especially those working with students, need impeccable leadership skills to ensure their orchestras are performing as well as possible. How have you grown as a leader?

Schleicher: Conductors are always behind in growth compared to our instrumental and vocal performer colleagues for a most simple reason: We can’t practice our “instrument” called orchestra until we have an orchestra to conduct. One can practice violin for hours and get better, but conductors can only mature through experience with an orchestra. And we rarely get an orchestra until in our 20s or 30s or even later. Thus, our late bloomer experiences. And since experience is the best teacher, I do hope that I’m a better conductor today than yesterday. When I, for example, conducted Beethoven Symphony No. 5 for the first time, it no doubt was pretty terrible. But now I’ve done it several times and although I can make no guarantee that it is better, it sure feels better. Improvement as a conductor is taking the risks to be free to make mistakes in a very public way, so that the next time, the mistakes are lessened. My wife says “a young conductor is an oxymoron.” I agree.

SP: What are you looking forward to most in the coming year?

Schleicher: I like the preparation part even more than the rehearsals or concerts, so I always pick repertoire to lead that I love. Thus, the best part of the coming year is always the summer study that precedes the rehearsals and concerts: The learning part. This is what I find the most stimulating part of my job.

If you would like to see Professor Schleicher in action, you can view the University of Illinois Symphony Orchestra here.