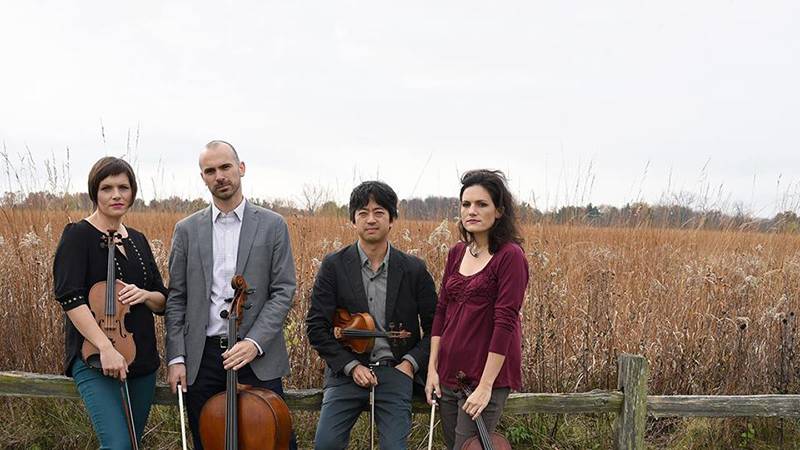 Last night I took my own advice and made sure I was there for the Jupiter String Quartet’s prairie premiere of Kati Agócs’ “Imprimatur.”  And I’m glad I did.

Like the planet which inspired their name, the Jupiter String Quartet, or the Jupiters as they are often called, inspire us to grow, expand and take risks. Last night’s performance derived its power from a rare combination of elements that are unique both to the Jupiters and to Krannert.

Let’s start with the Jupiters themselves. Now into their 16th year together, the Jupiters are bound together by a unique brand of chemistry. Not only are they impeccably matched in skill and style; they are family—literally.  Violinists Nelson Lee and Meg Freivogel, violist Liz Freivogel (Meg’s older sister), and cellist Daniel McDonough (Meg’s husband, Liz’s brother-in-law) play together as if in conversation, ranging from subtle responses to rapturous, often thunderous debate.

When the Jupiters perform, it’s a no-holds barred, full-contact sport. Hair is tossed, arms fly and bodies almost levitate from the sheer energy they raise. Often during a chamber music performance, I’ll close my eyes to better focus on the sound. But the Jupiters make it almost impossible to take your eyes off of them.

Add to this the aural experience that could only be possible in the Foellinger Auditorium. The warmth of the sound, the ability to create an intimate conversation with the audience in such a large space, owes its magic both to the acoustics of the space and the fact that, for the Jupiters, this is their space.  Their home.

The evening’s program may have seemed wildly diverse at first glance. Beginning with Mendelssohn’s “String Quartet No. 2 in A Minor, Op. 13,” the Jupiters followed with Agócs’ “Imprimatur,” and after intermission, ended with Dvořák: “String Quartet No. 13 in G Major, Op. 106.”  Yet there was a common thread running between them—a rich lyricism; a commitment to melody in its theme and variations as a vehicle for expression.  The Mendelssohn, in all its ranges of tempo and emotion, conjured a deep sense of reverence. This was the power of Jupiter at work, expanding our awareness of something beyond ourselves, whether it be the power of the creative spirit, or our gratitude for this night shared together in this space.

After a short break, cellist Daniel McDonough took a moment to share the story of how Kati Agócs’ “Imprimatur,” came into being. I was excited to hear new work created by a woman. But as McDonough continued to speak, the layers of Agócs’s story continued to deepen and expand. Not only was this a woman’s voice, but it was the voice of a composer who had begun as a vocalist and a composer composing for voices.  “Imprimatur,” is only Agócs second composition for string quartet. It is a perfect fit for the Jupiters, highlighting their chemistry, range, and technique.

McDonough spoke about the name itself, which often conjures up images of Roman Catholic publications. However, in Agócs usage the term refers to the act of devotional mark-making, or, more specificly, making one’s mark . The main motif continues to evolve throughout the seven continuous movements of the 15-minute work. Modern, lyrical, and fugue-like in its interplay between the four players, “Imprimatur” challenges the both the players and the audience with a hybrid of old and new tempo markings. The traditional markings (Recitative, Ostinato, Quodlibet, and Coda) were complimented by more expressive terms of Agóc’s own making (Enraptured Troping, Meditation—Crystal,and Wild Dance). McDonough called the last movement, the final act of mark-making, “an ecstatic, organic cacophany.”  It was a roller coaster of sound, emotion and techique. As the Jupiters held their last notes, bows in air, shivering with the last remnants of sound, I held my breath.

Co-comissioned by the Aspen Music Festival and School, Robert Spano, music director; the Harvard Musical Association; and Krannert Center for the Performing Arts at the University of Illinois at Urbana-Champaign, “Imprimatur” was peformed for the third time here at Krannert.

To have our Krannert Center participate in the development of such a unique composition is a huge point of pride for our community, just as is our ability to call the Jupiters our  quartet-in-residence. They are an exceptional group of musicians who perform with depth of emotion, energy, and skill.

The planet Jupiter’s symbol resembles the number four.  And it is an apt symbol for this quartet. We are lucky to have them teaching at the Illinois School of Music as well, where they like, their planetary namesake, they enourage young musicians to grow and take risks.

The program concluded vibrantly with Dvořák’s “String Quartet No. 13 in G Major, Op. 106.” Written after the composer returned home from America, the piece resonates with hope, vision, and passion. Unabashed in its optimism, it was the perfect antedote to our current climate of disillusion and distress.