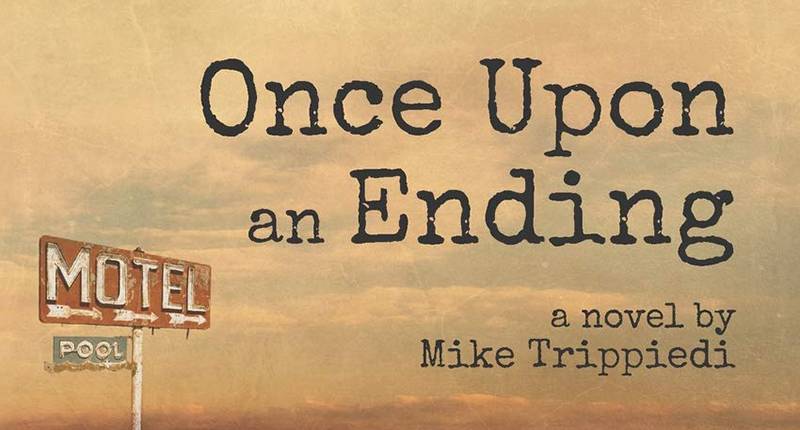 I was raised to love science fiction, and fantasy. As early as I can remember, there were copies of Dune, Lord of the Rings, The Chronicles of Narnia, and tons more on my father’s bookshelves. Highlander, Star Trek, Star Wars, Stargate [both the movie and the television show], and Sliders were constantly on the television during my youth. Whether book, movie, or television, if it was science fiction or fantasy my father consumed it, and let me enjoy it with him. I carry that same love for both genres with me to this day. Beyond the fantastical nature of the genres, they both can be a means of implicitly or explicitly engaging societal ills, questions about the world, or potential warning signs. But at the same time they can also be a wonderful escape.

Local actor, filmmaker, and author Mike Trippiedi’s novel Once Upon an Ending is one more example of how science fiction, regardless of the world the story builds or the circumstances that carry the plot along, can engage a reader in many ways. Although not without flaws, OUAE is a fun, and entertaining journey.

Set several years after the world has been ravaged by natural disasters, and a large portion of the population were either killed during the disasters or in the subsequent years, OUAE follows a number of survivors in search of a rumored, as Trippiedi describes it, house of pleasure. As these survivors journey through the world, their paths eventually converge. To say more on this would unfortunately spoil the story.

Initially, the first fifty pages or so of OUAE  were tedious. World building and introducing central characters are both vital for any story, this story could have benefitted from a little more finesse from Trippiedi. Originally a concept intended to be a screenplay, the writing at certain points read like succinct exposition expanded with a few too many adjectives fill a page. Trippiedi is witty, and he builds a world that is easy to imagine. But at the same time he overwrites. It doesn’t ruin the story, or make it less enjoyable. There are just moments when he takes a little too long to get to the point. However, I did like the twist on the natural disaster trope. Rather, than just some giant cataclysmic events or a nuclear event, it was just a series of inevitable natural disasters. And I enjoyed that Trippiedi explored how survivors would initially react.

The characters, at first, seemed to be based on tropes we’ve seen before. A preacher who received a vision from god, and is intent on proselytizing to all the sinners left behind. The father that must be tough to help his teenage son. And so on. This isn’t to say that I didn’t enjoy a few of the characters. Building a world while introducing characters and their backstories is difficult. But the tropes made it difficult to enjoy them at first.

Once the characters were allowed to breathe a little more, were not hindered by certain tropes, and Trippiedi isn’t reminding us of the characteristics that comprise said tropes, I found myself enjoying them much more; they had more substance to them. To be frank, the tropes seemed very much like the facades many of the characters created to protect themselves in the post-apocalyptic world. As mentioned, it is very difficult to write so many characters, and maintain their individual stories while building the world’s story. It’s a lot like herding cats. So, like the characters relying on their facade to survive the world Trippiedi seemed to rely on tropes to build the foundation of the characters.

On the surface level, OUAE is a story that examines human vulnerability, the need for human connection, and how both play out in a broken world. At its core, the novel examines the flaws and iniquities that keep us separated as a society. That if we do not address these iniquities, and the things that continue to harm our world, we will suffer the consequences. Like many authors before him, and even many currently, Trippiedi insists we may be staring this future right in the face.

Even with its flaws, I still enjoyed OUAE. Once beyond the initial world building, it was a fun, easy read. Although a world much more plausible than some created by other authors, it was still a nice escape filled with wit, and, at times, rather dark humor unique to Trippiedi. As I spent more time with them, the characters grew on me. I applaud Trippiedi for his ambition in building the world in OUAE. He set out to do a lot, and was still able to accomplish a hard feat: Writing a novel worth your time. If he were to write a sequel, I would crack that book open.

You can purchase a physical copy or e-version here.