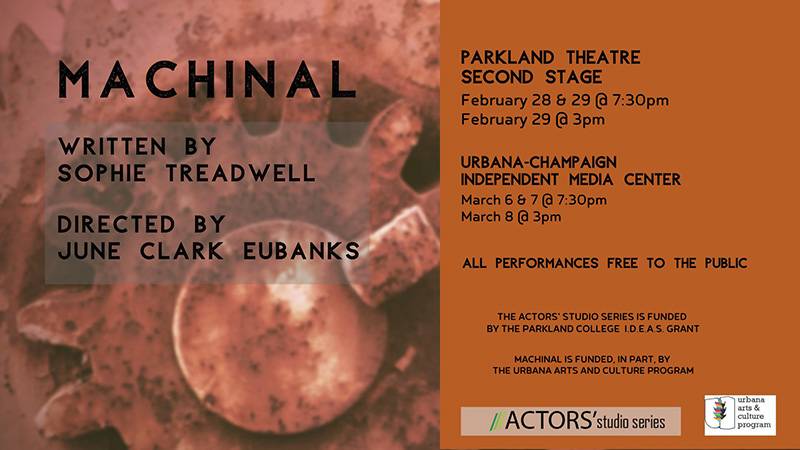 This is one example of the many profound lines in Parkland College’s Theatre production of Machinal: 90 Years of the Machine performed at Urbana-Champaign’s Independent Media Center at 7:30 p.m. on a chilly Friday night on March 6th.

Directed by June Clark Eubanks, Machinal is a heart wrenching tragedy that takes us to the 1920s in the city of New York. It focuses on the life of a young stenographer, named Young Woman in the programme, who is suffocated and stifled by society’s, and her mother’s, expectations. She marries and has a child with her boss, who she finds repulsive, has an affair and eventually kills her husband which leads to her execution by electric chair. This play was written by American playwright and journalist Sophie Treadwell, inspired by the real-life case of Ruth Snyder, who was executed in 1928, the same year the play was written, after murdering her husband Albert Snyder in 1927. This production is rewarded for its contribution to the Expressionist Theatre movement in the early 20th century and has been molded in numerous ways throughout the last 90 years since its creation.

Before going into detail of the performance, I will discuss the key structure of the play. The scenes were divided into episodes and in each the Young Woman’s role was switched between different actors with the passing of a ceremonial white and black scarf and a lingering hug between scenes. This exchange not only revealed that these actors were in fact one character but emphasized solidarity in that her experience can be related to all women. This special support amongst each other is seen only by the audience which I found to be important, creative, and beautiful.

Now as for the acting, the different actors of each episode: Melissa Goldman (Woman/Street Musician/Matron), Delaney Wright (Waitress), Britney Christman (Telephone Girl), Itorobong Asanga (Telephone Girl), Noel Aper (Court Stenographer), Erin Morrison (Nurse), Maggie O’Brien (Mother), and Kayla Smith (Stenographer/Law Clerk) each gave a unique and arresting portrayal of Young Woman with some remaining actions that reminded us that this is the production of a singular story. The fact that they were able to do this points to their hard work and dedication in producing that effect of authenticity which was certainly amazing. The Mother, played by Maggie O’Brien, grabbed the audience’s attention with her hilarious and strict demeanor while repeating “You’re crazy” to her daughter’s outpour of her differing views of marriage, adding to the suspense of the production. Parker Evans (Mr. Jones/First Reporter), Kevin Hobbs (the lover Mr. Roe/ Second Reporter), Phil Xiong (Doctor/ Judge/Prison Guard), Thomas Finch (Resident Doctor/Bartender/ Prosecuting Attorney/Prison Guard), and Matt Christman (Bellhop/Defense Attorney/Older Man) were forthright in their authority and power in the system that related greatly to the events that were taking place. Mr. Jones perfectly portrayed the eager husband who is so imbedded in the system and himself that he does not realize or care about his wife’s struggles. Mr. Roe, played by Kevin Hobbs, introduced a lovable contrast to Mr. Jones that was sweet and misleading as he plays a part in the Young Woman’s execution.

In terms of stage design, the stage was small and the loud colors in the background were somewhat distracting; however, the superb acting, precise lighting, and prop placement was enough to transport the audience back to the 1920s. Small props such as the typewriter, old radio, and desk were sufficient in detailing the era. The seating was also less ideal since the audience was on the same level and therefore we could not see the whole stage fully. But other than this, the message about the ever large and present “machine” was clear. Not only did the actors physically portray the machine in robotic and jerky movements — and repetitiveness of certain lines like “Hotdog!” — the machine was in a sense the system of patriarchal, capitalistic, and mechanized oppression that a woman’s agency depends on marriage and a child for the sake of happiness, financial wealth, social stability. Machinal stands as an opposition to the norm as it cost the life of this woman and most likely other women. But also, as a way to show that if the system does not change the machine will always work and stories such as this will always be a source to critique and exploit this awful machine.

My favorite moment was the final scene called A Machine. The Young Woman (Kayla Smith) is in hysterics as she screams “I will not submit!” as the Barber, played by Alex Noa (Filing Clerk/Younger Man) shaves her hair and the Priest, played by Collin Downen (Adding Clerk/Man), Prison Guards Dylan Heck (Mr. Smith/ Bailiff), Thomas Finch, and Phil Xiong loom over her while Excellence Onalundula as Singing Voice carries a soulful and heartbreaking tune. The rest of the Young Woman actors enter the stage and surround her until her death. The audience is quiet. The machine has done its job.

Overall, Machinal was a rollercoaster that touched upon topics such gender inequality, social and economic values, and a journey to freedom under oppressive circumstances that is still prevalent in today’s society, and I am glad that I chose to take a ride. I recommend everyone to witness at least one Parkland College Theatre production in C-U because you will definitely enjoy yourself.