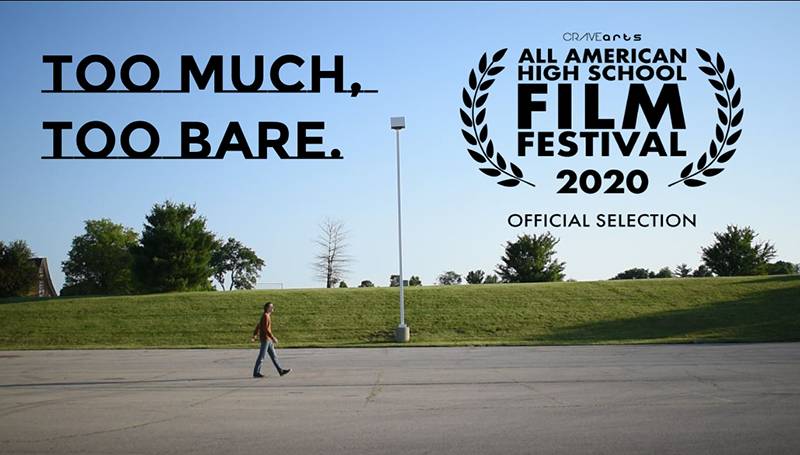 The Champaign-Urbana Film Society’s annual Pens to Lens Gala looks a little different this
year. Instead of being screened at the Virginia Theatre as in the past, this celebration of
Champaign-Urbana’s 9th through 12th grade filmmakers has gone online so that audiences can view the product of their hard work from the comfort of home.

Between the COVID-19 pandemic and widespread public outcry against injustice, 2020 is a
difficult year for high school students. Yet these talented young people have been able to
overcome numerous unforeseen obstacles and create something beautiful in the process.

I spoke with Max Pociask, a rising senior at Urbana High School whose film Too Much, Too Bare is featured in this year’s Pens to Lens Gala. Over the course of our Zoom interview, Max told me about his experience with the festival, how he first became interested in filmmaking, and what he hopes to do moving forward.

Smile Politely: How did you first become involved with Pens to Lens?

Max Pociask: It’s a part of the community, so people around me talked about it. My mother is a writer and she suggested it to me, then the idea crossed my mind that it would be cool to write something and then have somebody professional make it into a movie. I was intrigued by the possibility of filmmaking and I made a few things my freshman year, but I didn’t actually submit anything. The next year, I acquired some equipment, and I was ready to make something. But I ran into some roadblocks along the way, and by the time the deadline was approaching, I just felt like my mind wasn’t in the space to tell the story that I had written. I dropped that project and didn’t submit anything that year, but it felt bad to give up, so this year I was really determined to submit something. And I did.

SP: I feel like there have been plenty of roadblocks this year.

Pociask: Absolutely. That’s why I submitted the type of film that I did. I was browsing through other contests specifically created for short films that people have made during quarantine. So the film that I made is a solo work: it’s just me, and there’s very little dialogue.

SP: Were responses to the COVID-19 pandemic a trend that you noticed in the other films?

Pociask: I haven’t seen any of the latest submissions, but I wouldn’t be surprised. I definitely think everything in society was subconsciously affecting me as I was making this, but I already wanted to make something about the importance of people. So I think it’s a mix of both.

SP: How do you feel like you’ve adapted to the virtual format of the festival this year?

Pociask: Honestly, I’m not entirely sure. I haven’t really looked into the specifics of how this festival is going to be run. I finished a project and I needed something else to do, so I’m working on brainstorming a couple of ideas. I have to make something big if I want to get into film school, so my focus hasn’t really been on how the festival is run, but I’m sure it’ll go well. Virtual meetings are fine; they’re not as good as being in person, but Zoom is working out.

SP: Have you participated in any other film festivals?

Pociask: Yes, I’ve submitted to the All-American High School Film Festival, which is based in New York City. My short was selected for screening there this year, so it will play on a livestream in Octover. I’ll have the future opportunity to attend workshops and enter their invitational film contest as a result.

SP: When did you first become interested in filmmaking?

Pociask: When I was a freshman, I took a class called American History in Film and Music. I thought “Okay, this could be fun. I’ll learn about history, listen to music, and watch movies.” I took the class, and it was a great time; we went over the basics of camera operation and things like that. There was an option for students to receive extra credit for creating a film of their own, so I got together with a couple of friends and we made a short film. It was way too ambitious and made no sense, but it was fun, and I thought “This is cool, I want to do this again.” I took the class again to get a little more filmmaking experience, and the second short film I made was a lot better, which is when I realized this was something I wanted to keep doing. So I did, and here I am. I’m currently working on some applications for film school.

SP: You said the first film that you worked on didn’t make much sense?

Pociask:  Yeah, I co-wrote it with one of my classmates, and we had this overambitious idea of taking two parallel story arcs (a soldier at war transporting a secret message and a person in high school asking out their crush) and tying them together at the end. It made sense in our brains, but then we actually went about making it, and I don’t think it did. Sometimes when you’re editing, you get caught in a loop where you’ve seen it so many times that it’s hard to look at it from the audience’s perspective. So what I’m trying to focus on now is articulating things outside of my own head so that audiences can actually appreciate them.

SP: Of the short films you’ve made, do you have a favorite?

Pociask: I think the second one that I did my freshman year.  It was called The Record. I had an idea for one scene that could be a little bit creepy, and I was like “Okay, let’s take this scene and build an entire short film around it. I don’t think that’s how you’re supposed to go about writing these things, but we did it anyway. It had a looser script for people to just say what they felt was natural, but it worked out pretty well. I think it’s the most engaging of the films I’ve made.

SP: What are some of your influences as far as directors and movies?

Pociask: I really like Stanley Kubrick and 2001: A Space Odyssey. I love Greta Gerwig. She’s the best. If Greta Gerwig could be my mentor, that would be all my dreams come true. And Yorgos Lanthimos – I promise I’ll stop after him. He’s a great Greek film director who did The Lobster and The Favorite. I really like his dialogue. It feels so unnatural, but it works.

SP: How else have you been able to apply your knowledge of filmmaking?

Pociask: I have been working on the projection and media aspects for our fall show, The Theory of Relativity, which got selected for the International Thespian Festival. I edited together a little montage of things for the finale scene in that. The play talks about the interconnectedness of people’s lives, and in the last song, all these characters are realizing what they have in common. The director, Tim Broeker, wanted a collage of people from all over the world singing along with us, so we reached out to members of the international community to whom we had personal connections and had them just sing a few words of the song to get a checkerboard of faces across the screen. It was wonderful.

SP: What are some other areas of the arts that you want to explore?

Pociask: I know some basic concepts of music theory, so I created the score for Too Much, Too Bare. It’s very simplistic – just piano chords. Then I put it into a browser with some synthesisers. But it was fun. I think film scoring can be really interesting too. I want music to stand out in my films. I don’t think it does here, and it doesn’t necessarily have to in all of them, but I think music is a very strong component of filmmaking, so I want to be sure I can incorporate it to the fullest extent.

SP: What has been an important lesson you learned during your career as a filmmaker?

Pociask: First off, thanks for calling it a career.(laughs). Just not overextending yourself when making independent short films — you have to have a life outside of it. It has to be a side thing. You go into it, you develop a big idea and you want to execute it the way it looks in your head. Even if you don’t have the resources, you can still make something great. You just have to find the balance. It’s hard because when you’re editing, you can always make something better or see something that you need to fix. I feel like I’m never going to make myself perfectly happy with that, so that’s why deadlines are important.

SP: What do you think has proven most valuable as you’ve worked on your submission for Pens to Lens this year?

Pociask: Reaching out to people who are excited. You don’t want to work with anybody who’s just a negative force. My friend makes a brief appearance in the film, and he doesn’t do a ton onscreen, but he was really excited to be involved in it. So the enthusiasm and support of others was really crucial. People should want to be there to create the best thing.

SP: What do you think the role of art should be in response to political and social issues?

Pociask: As a young person, I’m still figuring that out, but I think art is inherently emotive. Everything has to do with how we’re feeling, so there are things in the world that are causing all of these powerful emotions. We shouldn’t stop ourselves from feeling how we feel and we shouldn’t stop art from reflecting that. The best art is as raw as possible. As bad as some things can be, they can always be good stories, and that’s what we live for; creating our own stories and hearing those of other people.

SP: Anything else you want to share with our readers?

Pociask: I have so much respect for all of the talented filmmakers in the festival. Don’t miss any of the films in the lineup.

Max Pociask’s short film Too Much, Too Bare, along with the entire 2020 festival lineup, is available for viewing on the Pens to Lens Facebook page.

To help support their work, conside making a donation to Pens to Lens or contact  [email protected] about volunteer opportunities.

All photos by Max Pociask