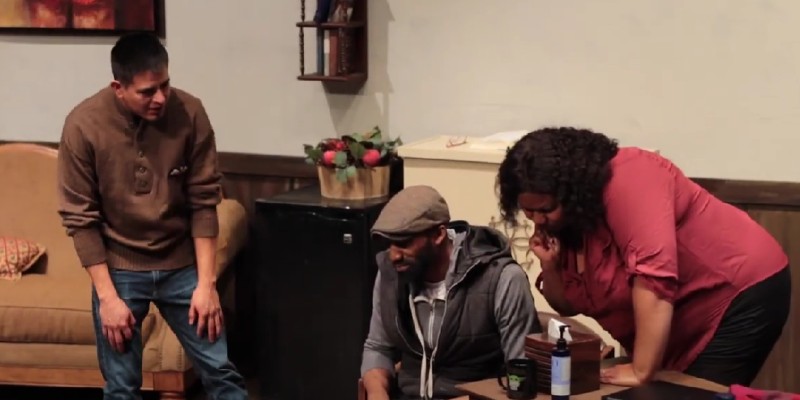 Homegrown: An Insurrection Play is the latest offering from playwright Nicole-Anderson Cobb. Debuting at The Station Theatre beginning this Thursday, the play explores events surrounding the January 6th insurrection through the lens of a church community. This will be her fifth play, and like the others she’s written, she leans into her experience as a historian and researcher to dig into complex issues that permeate our culture. Her first play, Tangled, won the 2010 Castillo Social Justice Play Award and was staged off-broadway in June 2012.

Anderson-Cobb shared a bit about her writing process and the themes in Homegrown ahead of opening night.

Smile Politely: This is not your first go-around as a playwright. What first led you to explore that as a creative outlet?

Nicole Anderson-Cobb: After I completed my PhD dissertation in 2007, where I encountered child soldiers in West Africa, the issue of gun violence kept gnawing at me in the various American cities where I was teaching and in my hometown of Chicago. I began to do research on gun violence in Chicago and at the same time, as a lark, I decided to take a playwriting workshop with Chicago Dramatists. During the first class meeting, I had this flash of insight (also known as a move of the Holy Spirit in Christian parlance) and was led to take all the research on gun violence, fictionalize it, and use the information in a play that I would write for that 10-week class. This course led to my first play, Tangled, that I completed in August 2009. Tangled uses humor, candor, and intergenerational conflict within a family of African American funeral directors to explore the crisis of gun violence — a crisis devastating communities throughout the United States. From the experience with Tangled I found that I could wed my training as an academic researcher and putting the research into the mouths of characters to create plays that provide critical community conversation for audiences. I have continued to write plays on and off these last 13 years.

SP: Can you share a little about your playwriting process?

Anderson-Cobb: Typically, I’ll hear an idea that intrigues me, or there will be an issue that just nags me, grates on my nerves, sits and waits for me until I give it some attention. Then, I’ll relent and begin doing research on the topic to see what has been written on the subject. Usually I spend several months just reading widely about the topic on and off, not necessarily sure if I’ll even write a play at that point. Then, once I feel like I have an idea of the subject in the most broad terms, once I feel like I’ve considered the various sides of the debate and have exposed myself to a good amount of the complexity, then it’s time to write and see who shows up. At that point, I open up a document and begin typing to see what characters show up to begin hashing out the issues. Because I am often in the midst of working on multiple projects, I keep a folder of topics or ideas that I come across in the news, in articles I’ve read, topics I’ve heard in conversations I’ve had or overheard, and just make a note to myself to go back and think about that topic for a possible play.

Currently, I am working on this Homegrown production and a production of my play Black Canaries on Black parents navigating 21st century schooling to be produced in Spring 2023.  I am also working on my “Beyond Land Acknowledgements” collaboration with Latrelle Bright for April 2023, and trying to finish a TV pilot that I began in October 2021, among other projects. At this point, I have far more topics than I might ever get to, but if I get bored or need a new project I have that topic file to go back to just to spark my curiosity afresh about a topic I was interested in at one point.

SP: Each of your plays seem to be rooted in an element of personal experience. How does that bear out in Homegrown?

Anderson-Cobb: The plays I have written over the last decade have been on topics as varied as anti-Muslim hate crimes on college campuses, a family of African American funeral home directors battling gun violence; the non-denominational church and the January 6th insurrection, American museum cultures, early 20th century arts collectives in Charleston, South Carolina, African American sororities, gun violence in America cities, Black parents navigating 21st century American schooling and police community relations. This diverse collection represents either my personal experience with the subject matter, or the fact that the subject matter made such a deep and lasting impression on me that I needed to write a play about the topic before I could let it go. The latter was the case with Homegrown: An Insurrection Play.

I was right here in Champaign-Urbana on January 6th, nowhere near the insurrection. However, in the months that unfolded since January 6th, 2021, this incident mystified me and intrigued me, so I began my process of reading widely to process what happened just to make sense of it for myself.

SP: The play description indicates that it’s an examination of the events of January 6th from the “perspective of a church community grappling with political polarization and its effects on a local church, its families, and the broader community.” What led you to choose that particular lens — the church — to process this event?

Anderson-Cobb: In most churches, we spend a lot of time policing people’s personal morality, especially when it comes to sexuality, sexual conduct, physical appearance/dress, and individual behavior, respectability and conformity. Yet, on the major questions of our civic life together, too often the church has nothing to say. I find that as church goers, we talk a lot about what we are going to do for the “less fortunate” economically among us, which is extremely important. However, we rarely address the political stresses and strains grating on us that result in isolation, despair, and violence on a daily basis. So, as a person of faith —who is often quite restless in church for the reasons above — I wanted to create a context where matters of pandemic and political polarization come crashing into the church in ways both humorous and serious. Thus, the play becomes a space where we can watch how this fictional church works to make sense of the broader political moment of the lead up to January 6th and life after January 6th in their community.

SP: I know that Homegrown also addresses parenting during this tumultuous time, and how the political landscape affects young people. Why did you feel that this was an important element to include?

Anderson-Cobb: An interesting aspect of the January 6th Insurrection is that we behave as if insurrectionists landed from a UFO, or hatched out of an orb, like they are some kind of foreign creature that hurtled to Earth. I wanted to interrogate the reality: that insurrectionists are local, everyday American citizens, just like the rest of us. They are our neighbors, friends, our bosses, stakeholders in our communities, often powerbrokers in our communities. They are people with relationships and kids, caring for aging parents, folks who had car notes, car pool, mortgages, and Zoom meetings and were supervising remote learning — just like the rest of us. It was important for me to humanize insurrectionists in order for us to examine why people got involved, and to force us to examine what we might have in common with them.

SP: What does parenting through our current political landscape look like in your life?

Anderson-Cobb: In an environment where questions about Critical Race Theory, book banning, problematic school textbooks, intense school board meetings, and school environments where there are few opportunities to collaborate as adults, I find parenting in times of polarization stressful — particularly when neither our faith communities nor our civic organizations require us to work through cross-cultural conflict as adults. Locally, I feel like so many local organizations talk at parents and feel like they have to ‘fix” parents, and that parent needs are rarely heard. Additionally, as a parent of color engaging in public and private school settings locally, regardless of your educational attainment or income, you are rarely heard, taken serious or valued as a legitimate contributors to the school’s culture.

I wrote the play Black Canaries to explore some of these issues. I really feel like theater and plays like Black Canaries and Homegrown are spaces to use storytelling to provoke audiences to consider perspectives that they can’t hear, don’t have access to, or are resistant to in other contexts. Homegrown is also an intergenerational dramedy, so that audiences can consider how parent activism, parent distractions, parents’ lack of attention to children’s needs can have horrifying consequences — if we are not paying attention to our children during these times of political polarization.

SP: How does your faith inform how you navigate complex political issues?

Anderson-Cobb: Actually, my plays provide an opportunity for me to wonder aloud about some of the deepest questions that I am grappling with personally, and want to ask the audiences that attend my plays. How do we really resolve conflict and model that for our children? Do we listen to differences of opinion and model that for our children? Do we even know how to listen to one another without rushing in with a defense or justification? How do we explain political differences to our children? What are we teaching your youth about the diversity of others’ thoughts, histories, lived experiences in our community? Is there room in our faith communities for us to talk about polarization, radicalization and violence within our communities being manifest in our members’ speech or action? Where are our ministries focusing on directly addressing polarization, radicalization and violence in our communities? What are we willing to do to make our communities safer and healthier?

SP: What do you hope audience members will “bring home” with them?

Anderson-Cobb: I hope audiences listen closely to the concerns the play examines. I hope the play is a mirror for our continued work across a whole host of divisions in our community. I hope audiences are bothered, amused, annoyed, entertained, and moved by some of the play’s content. I hope the play sparks conversations, programs and projects to serve local communities better and create spaces in this community where people are heard and valued in all of their complexities.