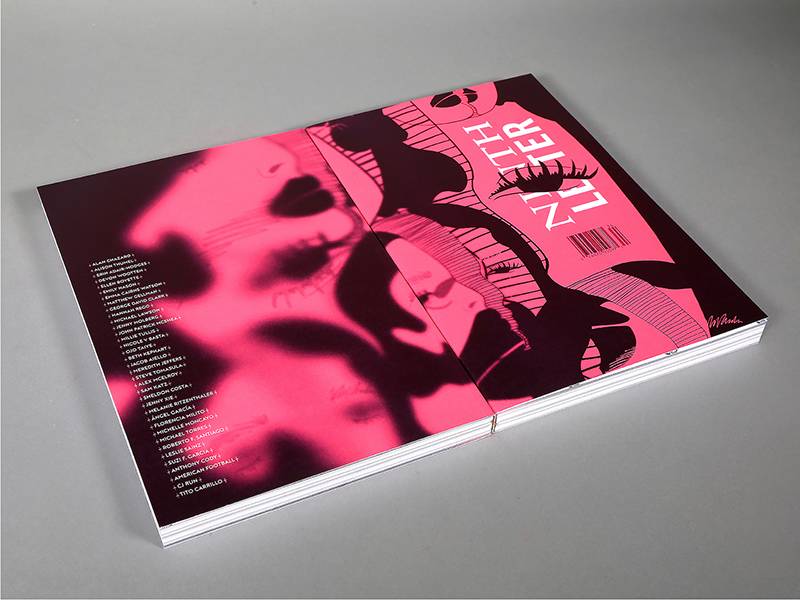 From the bold neon pink and black cover to the languid playfulness of the title typeface, it was clear that the Spring/Summer 2019 issue of Ninth Letter was not shy. The Picasso-esque cover art featured rivers or roads emerging from voluptuous lips, and dark, long-lashed eyes that would not be ignored. And as I slowly flipped through the issue, getting the lay of the layout, sensing the range of content, both written and illustrated, it became clear that these images were not besides the point. They were the point. Between these covers awaited a multitude of voices, many of which rarely make it to the surface, let alone the spotlight, in our culture. And like those lips dripping with pathways, these voices were waiting to take us places. Inside minds, inside lives, inside our hearts and imaginations. If you like your journeys transformative, and enjoy the kind of travel only literature can provide, this is the summer read you need.

Starring in this fiery summer issue is a special poetry feature entitled “The Audacity of Language: Eight CantoMundo Poets.” CantoMundo, a national organization supporting Latinx poets, serves as a poetry incubator for emerging voices. And from the poems featured here, it’s doing a helluva job.

The Ninth Letter editors share their inspiration for this collaboration below.

“Ninth Letter is pleased and honored to present this selection of work from eight extraordinary poets who have served as fellows for CantoMundo’s annual poetry workshop. We have always recognized the importance of lifting up marginalized voices, and we’re committed to publishing writing from communities that have struggled historically to be heard. In our current political and social climate, the need to celebrate diversity in the arts is even more imperative- through poetry, and fiction, and creative works of all kinds, we will celebrate the words and songs from the unheard corners of our world, defying those who would silence them.”

Earlier this year, when exploring the Winter 2019 issue of Ninth Letter, I shared my strong belief that the much of Ninth Letter’s magic stems from its dialogue between text and image around shared themes. Stirred by the talented hands of graphic designers, illustrators, and editors this cauldron of expression produces an alchemical reaction, and resulting in a new experience that is far richer than the sum of its ingredients.

Experimental or creative layout is one of Ninth Letter’s strong suits, especially in its presentation of poetry.  But in this issue the experimentation is not merely in service of the meter, or even the tone. I might go as far as to say that it serves the larger social justice mission of the issue.

Many of the CantoMundo poems are layed out in ways that are range from counterintuitive to confounding. In the case of reader is required to continuing rotate the page 90 degrees this way 180 degrees that way and the back again. Here the voice of the “other” is in control. The reader is caught off guard, made to work harder, and, for those brief moments, made to feel like the unwelcome stranger. The fiery passion inherent in this section’s particular mission burns bright and hot, igniting discomfort and, ultimately, empathy and understanding.

Anthony Cody’s “Elegy in Skin, in Kerosene & Mesquite, Antonio Rodriquez, a Mexican Lynching, November 3, 1910” illustrates this strategy well, also employing a mixed-media/collage technique. The inclusion of newspaper clippings, particularly ones that include headlines like “Mexican Murderer is Burned at Stake,” play with the notion of how the media distort our experience of those we deem “other,” encouraging a dialogue between the poet’s truth and the newspaper’s rhetoric. A similar dialectic occurs in Roberto F. Santiago’s “In Response to an Old White Woman Saying ‘I guess we’re on Puerto Rican time’.” Dancing between English and Spanish, the speaker calls her out on her false sense of kinship. “You think cuz your Daddy’s from the Bronx, we cool?” burns with hard truths, namely that her Daddy’s Bronx and that of the speaker’s Papi remain a universe apart.

There is always a risk involved in introducing a special section to an established format.  Will this special content feel integrated within the whole? Or is its otherness the whole point? How will the layout and visual transitions be handled? The challenges grow even deeper when bridging textual thematics.

This issue hits the sweet spot between showcasing the work of CantoMundo poets and allowing the rest of the issue to be inspired by it visually and thematically. Like a well coordinated modern outfit, the pieces don’t need, or perhaps even shouldn’t, match, but they do need to work together.

“WWA” or “Where we’re at” is “a regular column written by Ninth Letter staff and colleagues about the wonders, oddities, and complexities of the heartland. “Toward conversation” by Aumaine Gruich makes an elegant transition from the voices of the CantoMundo into the remaining sections of the issue.

Journeys take many forms. And as Gruich tells, it, a walk across the room, the first step into a conversation with a stranger, can bring one closer to oneself or closer to God.

This issue is particularly visceral. You can taste it and hear it in the language (often a mix of Spanish and English). The colors and lines are as bold as the voices are audicious. For this writer, this heady blend of pink neon, street Spanish, and vibrant street-art inspired illustrations transported me back to my years in what was NYC’s Spanish Harlem. The hot summer nights filled with beats from the boombox and laughter and gossip trailing in and out of the corner bodega. The click of the dominos against the concrete stoop. And the tension thick in the air that came with the first wave of gentrification and never left.

Also to the editors’ credit, the issue somehow manages to feel both firmly rooted in the heartland, particularly here in Chambana, while catapulting us to lives and places far beyond.

Jess Tanck’s “A Geography of Sound” tackles the challenge of finding yourself in a landscape tha suffers from “the lack of a visual touchstone.” Asking:

“In such a place, what locates you? A absent an atmosphere that clamors for the eye’s attention, what calls you to the preesnt? For me, the answer is sound.

Sound carries in the midwest—especially in Champaign, Illinois. Here, without forest to buffet or hills to swallow noise, sound has a way of spilling in evrery direction, carried on the prairie wind.”

What follows ia deeply specific, yet still universal exploration of wind sounds: bells, sirens, cicadas, trains—just to name a few. Continuing the theme of local sounds is a series of three interviews with musicians who have found themselves at one time or another rooted in the Chambana prairie.  Here you’ll get to know Steve Lamos of American Football, Jazz trumpeter Tito Carrillo, and CJ Run, whose hope of ‘Influenc{ing} young artists to embrace every single part of themselves and to pour it into their art,” could serve as a mantra for the entire issue.

The issues continued path through identity and self-acceptance takes on the struggle of body  non-conformity in Melanie Ritzenthaler’s short story “Little Finger.” In the character’s support group, she is one of the few with a little something extra (a 6th proto-finger). Throughout the narrative she shifts between seeing herself as “Little Finger,” “daughter,” and in the early stages of a first romantic relationship, “a woman.” Despite fantasies of extracting this something extra through a series of comical and horrifc means, the narrative begs the question, “who will she be when she is no longer ‘Little Finger’?”

Jenny Molberg’s “A Self Portrait as Nothing,” pictured below, is pure Ninth Letter;  layout and photography reaching out and guiding the reader inside both a cerebral and visceral experience of a journey-to-self which yields “nothing in the shape of nothing.”

From its bold palette to its diverse range of art; this issue sizzles with heat in its various forms. Anger, fear, lust, desire (for meaning, for self-acceptance, for connection with others). And unlike those other summer beach reads, these stories and poems, these voices, familiar and strange, will stay with you past well past empathy Labor Day.

All photos from the Ninth Letter website except fourth photo, which is from Debra Domal