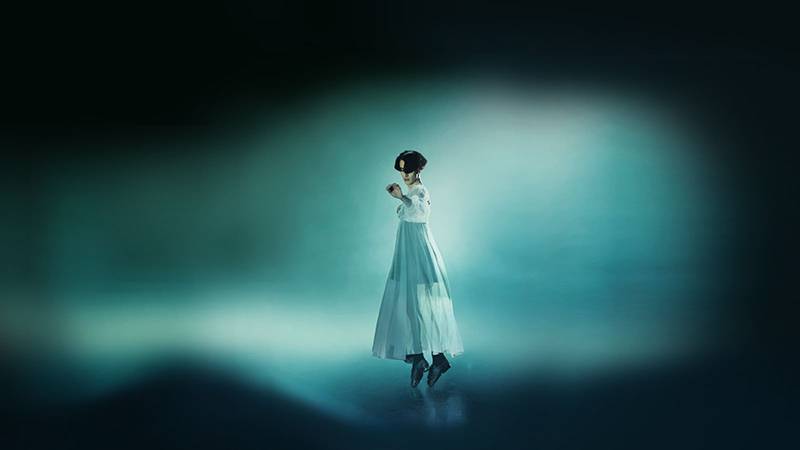 As I confessed in my list of five must-see arts events in November, Dance at Illinois had me at the October Studiodance II. And this month’s November Dance did not disappoint. This was, perhaps, one of the most perfectly conceived programs I have seen here. Deep in historic references and re-imaginings of classic works, while also giving space to brave new work from faculty and students, November Dance honored historical inspiration while remaining grounded in the present moment, and ultimately illuminating the future of dance performance’s rich capacity for storytelling and community building.

In her program notes, concert director and department head Jan Erkert shared this:

As we move into our 51st year, we wanted to step into the future by honoring our past. Throughout the last 50 years, our students have danced in works by artists who have fundamentally changed the field…. But moving into the past is tricky business. How do we preserve our histories and our dancers? … When a re-constructed dance is performed by different bodies with different histories at a different moment in time — it’s tricky!

November Dance contains two reconstructrions and two new dances that wrestle with thsi condundrum…. Ironically, by bringing back works from the past, and/or by shifting the context of dances of today, we keep feeding our bloodthirst for something new,

November Dance had many surprises in story for its audience, beginning with the already in process opening segments from “Deca Dance,” performed with great skill and deep joy by the talented and charismatic Jeremy Taylor. This welcome yet unexpected break from traditional concert protocol had the effect of blurring the lines between performance space and mundane space. We the audience were entering into a world that had been there before us and would go on after we had left. It was a joy to watch Taylor move through and claim space, testing his bodies boundaries, occasionally breaking the fourth wall to draw people further in. Once the audience found stillness and the designated hour approached, Taylor was joined by the full troupe of Deca Dance performers. And I use the word troupe intentionally, as this physically and emotionally demanding performance proved this group of dancers a deeply-intuitive and close-knit group who work together well as a whole, in duos and trios, and in solo. They hold each other up, encourage and inspire each other, and draw deeply from each other’s combined strengths.

What followed was a brilliant and bouyant reconstruction of Ohad Naharins’ original work by Omri Drumlevich and Zina Zinchenko. Featuring music that was literally made to dance to (bossa nova, rhumba, and cha cha), “(Segments from) Deca Dance” brought home the visceral nature of this art form, the need in all of us, to want to move in response to music. Drumlevich has called “Deca Dance,” “more than a montage; it is actually a living and breathing ongoing creation.” One that, as Erkert notes, finds the students of Dance at Illinois “creating their own unique community, carrying the threads of the past, but inventing something uniquely their own.”

In addition to the tension between past and present, the program dove deep into the tension between the individual and the community. This becomes particularly true in ritual, wherem as Erkert mentioned in her opening remarks, the voice of the one is asked to come into tune the voices of the many in the name of a greater purpose.

This was clearly the case in Jennifer Monson’s powerful exploration of Hurricanes Sandy and Maria in “gorge,” “idling gorge just,” “just idling,” and “just.” The dancers struggled into and against each other, vibrating with the changing weather patterns. The movements and sounds were wrenching and often painful to fully absorb. Dressed in tattered layers, expertly designed by Larissa Almanza, the dancers wore the layers of their past and present as they fought to create a future. I watched this performance on the last night of its run, which I note only to underscore Monson’s program note highlighting both the improvisionational and cumulative nature of the performances. “Each evening will be shaped by the aftermath of the night before, and we will push through thresholds of exhaustion and acceleration.” I quote this here because I can think of no better words to capture the long-term challenges those fortunate to survive such natural disasters face long after the public has moved onto the next tragedy.

After a much needed intermission, we were treated to Roxane D’Orleans Juste’s reconstruction of Jose Limon’s “A Suite from Psalm.”  For those unfamiliar with this important work, it takes its inspiration from the Jewish notion of the thirty-six Just Men (Lamed-Vov, in Hebrew) upon whose shoulders rest all the sorrows of the world. According to legend, if one of the Just Men were to be missing, the sufferings of the world would have no choice but to be released into world, ultimately destroying humankind. A testament to the power of the human heroism, and the triumph of the spirit over death, “Psalm” took on a very welcome updating in Juste’s hands, which casts only female dancers. A powerful nod to the depths of women’s suffering, then and now, it was a joy to see these movements on the strong female bodies of this troupe.

The finale piece, graduate student Danzel Thompson-Stout’s “Manifesting Our Movement; Manifesting Our Dance,” nailed the sweet spot between the unique voice of the individual and the power of a group moving in harmony. A pulsing blend of movement, voice-over narration, visual projection and infectious music, “Manifesting” employed house dance culture as a framework for these deeper explorations.

The rhythmic repetition, both on-screen and in sound, of “I am nothing. I am beautiful. I am existing. I am bold. I am sensual.”  And one by one, trio by trio, duo by duo, these dancers, moved through these identities, leading to a triumphant owning of individualism and our deep sense of community. We together and apart are all of these things, our deepest fears and our greatest joys. Standing together to celebrate and encourage, each as they took their moment in the spotlight. “Manifesting” was an electrifying conclusion to a powerful night of narrative dance performance. Kudos to lighting designer Conner Jones expertly moved our focus and attention. The embodiment of joy in movement was literally contagious as the audience, myself included, could not refrain from whooping and moving in our seats, and soon after, with to our feet with a standing O. Thank you to Dance of Illinois for continuing to present us with moving and thought-provoking dance performances.