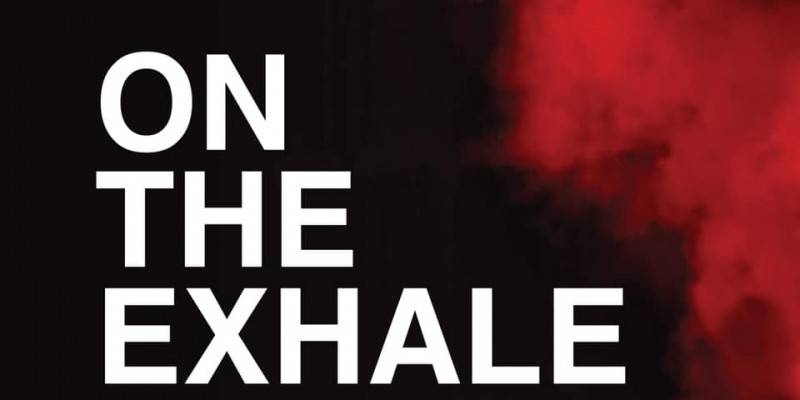 There are times when an evening at the theater reminds you why you love the form. Sometimes this involves big production values that flood the stage and delight the senses with color and sound and theatrical pyrotechnics. Other times, the stage is bare and intimate, there is only one woman on stage, and the pyrotechnics are all inside her.

In the Twin City Theatre Company production of Martín Zimmerman’s On the Exhale, Kimmy Schofield has, I think, arrived at something of a breakout moment. She has, over the last several years, done excellent work in local productions, including impressive turns in the Station Theatre’s Hand to God and She Kills Monsters, Twin City’s The Mountaintop, and numerous other plays, musicals, and films. But here, in this one-woman show, she holds the audience and owns the stage in a whole new way. Under the thoughtful and natural direction of Dustin Yocum, Schofield has constructed a performance that will likely leave you breathless as she moves through an emotionally charged yet impressively restrained narrative involving an all-too-common tragedy and one woman’s response to it.

I hesitate to give away too much of the plot, but, in order to give context to my reaction, I’ll offer part of the official publisher’s synopsis: “When a senseless act of violence changes her life forever, a liberal college professor finds herself inexplicably drawn to the very weapon used to perpetrate the crime – and to the irresistible feeling of power that comes from holding life and death in her hands.” Having read the play, I knew everything that was going to happen when the stage lights came up. Or, rather, I thought I did. I suppose, in this case, reading the script is rather like looking at a map: you might know the route, but you don’t have an appreciation for the journey.

In Schofield’s hands, the journey is detailed, engrossing, and very rewarding. Her professor is not given a name in the play, possibly because she’s the one telling the story, but more likely because she could be virtually anyone, including someone in this play’s audience. The professor is highly intelligent, capable, articulate, and yet believably brittle, even as the play begins. She tells her story as an ongoing present-tense experience, not looking back upon past events but walking through them—with you, in front of you—now. The use of present tense and the playwright’s brilliant use of the second-person (Schofield’s character never says I, always you) put the audience in the thick of the story, occasionally uncomfortably so. And whether or not you find the outcome of the tale plausible, you won’t be able to deny the skill with which you were delivered there.

Schofield’s control of voice, tempo, physicality, and emotion are truly impressive here and speak to both a strong communication between actor and director and a deep connection with the text. I must say that I felt a much deeper connection to the text as performed than I did when reading it. This is almost entirely due to Schofield’s strong performance, though I suspect it also owes to the fact that my daughters’ school was placed on lockdown this past week. How commonplace the horrifying can become.

Given the stakes of the play’s content, I kept count of numerous times that a lesser actor might have overdone a particular moment, losing sight of the story as a whole in service of moment of “great acting.” I am so pleased to report that, throughout this journey, there were no such detours. And because of that, the entire hour of storytelling was an ongoing and deeply moving example of Great Acting.  It is my strong recommendation that you take the journey.