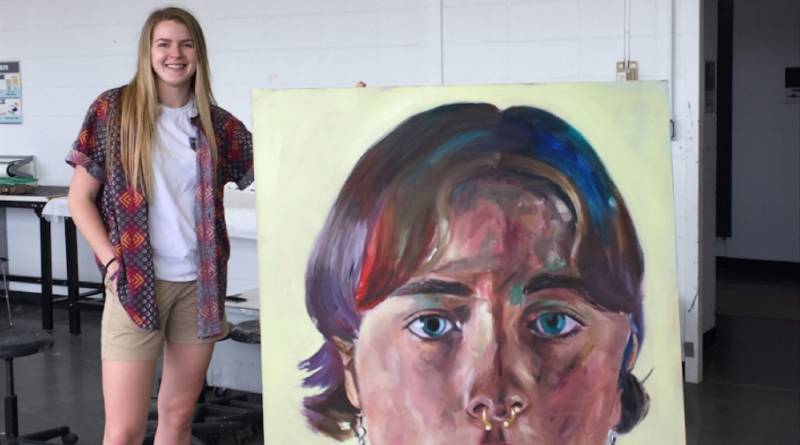 Nikki Kelsay is a recent graduate of the University of Illinois at Urbana Champaign with her BFA in Art Education. She is passionate about engaging viewers with her large-scale oil paintings that often depict underrepresented groups. Kelsay grew up in Wheaton, IL and committed to pursuing art as a career during high school. On November 9th, 2019 Kelsay won the most votes at the 8 to Create Undergraduate Art Gallery with her painting “Bobby Love,” making her the student artist that would participate in the 2020 Live Art Show. Unfortunately, due to COVID-19 the show, among other events this year, was canceled. In an interview with Smile Politely, Kelsay reflected on what inspires her to study and make art, shared her experience about graduating from college virtually, and gave us insight into her creative process. We hope you will be as inspired by her story as we were.

Kelsay began her artistic career as early as grade school, when her peers were amazed at her ability to create. During her sophomore year of high school Kelsay took a painting class at the Art Institute, where the professor was so moved by her work that she spoke to Kelsay’s parents privately about furthering her education in art. With her parents on board, Kelsay continued taking classes and her artwork became a way to express not only herself, but to bring attention to social issues. Kelsay’s AP Studio Art Concentration focused on breaking stereotypes of African American Youth. Living in a predominantly white and conservative neighborhood, Kelsay saw the struggles of her own Black foster brother in this environment.

Additionally, she was disturbed by the negative reactions she received about having a Black boyfriend at the time. Kelsay knew she had to address the stereotypes the people in her community had about Black men, as well as their lack of knowledge about racism. Her 12-painting series depicts a Black boy growing up in Chicago, overcoming poverty and violence in his neighborhood, attending college, getting married, and having a family.

As Kelsay explains in her latest Instagram post, she currently acknowledges that these “life events don’t necessarily equate success” and that she was trying to understand and showcase “an experience I was, and will always be unfamiliar with, regardless of my intentions. I now understand that the cycle of poverty, the prison pipeline, and systemic racism make it harder for young Black Americans to break out of the life America tries so hard to set up for them: one of poverty, violence, and incarceration.”

Kelsay has always been a painter at heart, however she has been open to experimenting with other mediums. Freshman year of college, she took a ceramic sculpture class that forced her to think more conceptually about her work. Her artwork has always addressed current social issues. In high school, she created works about victims of sexual assault to give them a voice. During college Kelsay reflected on her practice and how it could potentially tell her own narrative. The artwork she made became more reflective of her own beliefs, struggles, and values.This is also when she became comfortable with her own sexuality and embraced queerness. Kelsay had planned to paint either a self-portrait or a portrait of a famous queer woman during the 2020 8 to Create Live Art Show. Additionally, Kelsay plans to make work reflecting on themes of Catholicism and Christianity. Kelsay attended Catholic school for 14 years, making it a large part of her upbringing. She is currently in the middle of reading the Catholic Bible as part of her research process. Her goal as an artist is to elevate queer voices, reflect upon queerness with a religious background, and question womanhood in a heteronormative white cisgender society.

Kelsay’s creative process is very fascinating. Kelsay usually thinks of something she wants to talk about and these thoughts manifest themselves in her head as imagery. Upon sitting with her thoughts, Kelsay compiles them into a visual collage consisting of memories, videos, and images. She then stands in front of a blank canvas and visualizes the painting in front of her. She begins. Kelsay works in a series of bursts, which take a few hours each. This process has been working thus far, but Kelsay mentions wanting to normalize sketching and refining ideas within her routine. This will give her greater room for adjustments within her work. The time-consuming labor of painting is something Kelsay struggles with as an artist. Oil paint is an especially difficult medium to work with, requiring hours of drying time in between layers. Kelsay plans to implement stricter deadlines for herself as she continues making work in the future.

Kelsay’s last semester at UIUC was disrupted by COVID-19. This was the first time she was not making work in the studio, but student teaching instead. She spent eight weeks at Rantoul High School and experienced two weeks of student teaching at an elementary school before spring break, which is when students were informed that they would not be returning to campus. Although cut short, Kelsay learned a lot about herself during this process. She wants to teach people who will respect and appreciate art as much as she does. To achieve this goal, Kelsay will be taking a gap year to focus on her artwork so she can apply to graduate school, with the hopes of one day teaching and inspiring students in academia.

Kelsay currently finds motivation to practice artmaking by thinking about how it can positively impact her future. Upon finishing classwork, Kelsay remade her old bedroom into a painting studio. She wants to produce 15 to 20 new pieces, which she will use in her application to graduate school. Kelsay is influenced by the power her art has, as a catalyst, to inspire questioning, reflecting, and action within viewers. This pushes her to be constantly creating. With her artwork, Kelsay wants to “make [her] voice heard, be loud and clear, break barriers, and make people uncomfortable.” Her advice for other artists is to find what you are passionate about and to create artwork on this topic. It is important to think about what you want to say with your work. Especially on social media platforms that reach large audiences, Kelsay challenges artists to think critically about what they want to communicate.