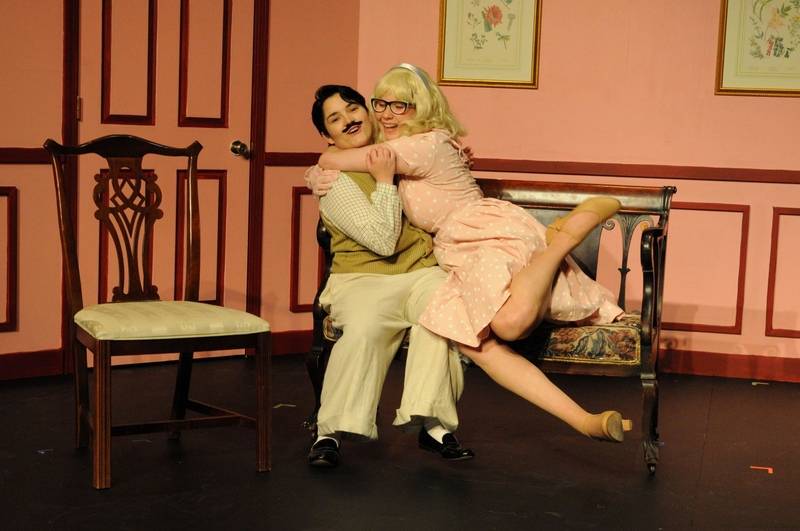 Following the late-summer flurry of auditions that swept through the area recently, the fall theatre season is set to get underway this Thursday, September 27th, with Parkland College Theatre’s production of the classic comedy The Servant of Two Masters.The play’s title might ring a bell for local theatre enthusiasts, but director Michael O’Brien has made it clear that this won’t be your great-great-great grandfather’s take on the pantalooned comic material.

I spoke with O’Brien about the play and his high-energy concept.

Smile Politely: Since this is the first show that you’ve directed in the area (that I know of), could you give a little background on your history with Parkland and theatre?

Michael O’Brien: I am a humble part-time faculty at Parkland teaching theatre and communications courses. This is my third year working for the Fine & Applied Arts department.

SP: My understanding is that you submitted this show for the Parkland season. What makes this show — and type of show — important to you?

O’Brien: I hope this makes sense, but, ultimately, I hold a deep-seated antipathy of the “fourth wall” convention. For me there is a marked difference between a production that plays for the audience and one that plays with the audience. Don’t get me wrong, I enjoy almost every theatre production, on some level, regardless of the style, genre, or conventions. But there is a certain joy I get when a production can acknowledge the presence of the audience and then invite/include them on the same side of that fourth wall. This of course is just my personal aesthetic, but if performers and spectators are going to be in the same room together, I feel everyone should walk away feeling like they have been part of one large experience, not on one side or the other of two smaller experiences.

SP: Which brings us to your take on this material. How have you adapted Carlo Goldoni’s original The Servant of Two Masters for a modern audience?

O’Brien: The script has its roots in the Commedia del’Arte which originated as a form of street theatre in early 16th Century Italy. I’ve always imagined these early, historical commedia performances akin to sitting around the house with your family and friends telling old stories that continually get more and more exaggerated. It’s this kind of feeling that I’m aiming for with the Parkland production. We are turning the blackbox theatre into a mock television studio where the audience will witness the “live broadcast” of a 1952 sitcom called Servant of Two Masters. With the actors constantly talking to the audience (asides) and the notion that the audience is part of the broadcast, I’m hoping the audience can walk away feeling they’ve had a great time with the show and not just at the show.

SP: There was a pretty phenomenal turnout for Parkland Theatre auditions this fall. How did you go about conducting auditions? How did this format helped you make your decisions about casting?

O’Brien: My audition process is a bit unconventional. Especially for a show like Servant where the characters are based on old stereotypes and stock characters. I wanted to find actors whose personalities are good matches with said characters. I normally start with a game or two that lets the actors relax around me and each other. Then I run them through a mini-gauntlet of improv exercises that require the actors to use their voices, bodies, and, most importantly, their imaginations and creativity. Long story short, this kind of audition give me a real sense of the actors as real people and their willingness to rid themselves of inhibitions. Once I have a good notion of the actors as real folk, I can then plug them into cold readings to see how they work with other actors. All that being said, ultimately all I do is make the actors play with me for a while and then make a gut decision.

SP: You’re well into rehearsals now and close to opening. Has anything about the process taken you by surprise?

O’Brien: Nothing really stands out as unusual, or has taken me by surprise. Knock on wood, so far it has been a fantastic journey.

SP: What is your message to your potential audience? What would you like them to bring to this experience?

O’Brien: What we are doing with this production is a bit unusual and genre-bending. All I ask is that you come to the show, leave preconceived notions at home, and have a grand time with us.

Parkland College Theatre’s production of The Servant of Two Masters is translated and adapted by Jeffrey Hatcher and Paolo Emilio Landi from the original play by Carlo Goldoni.