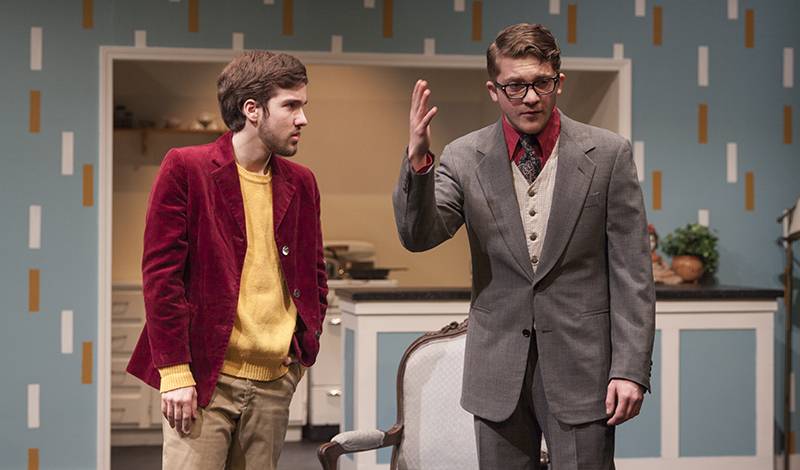 Sometimes in theatre, even in film and television, there is a juxtaposition between a problematic script, and a talented cast elevating said script. Despite unlikable characters, poorly written jokes, et cetera, a cast can make a show rather enjoyable. I found this to be the case with Parkland College Theatre’s 28th Annual Student Production. In spite of tasteless jokes, and the portrayal of women as either frail, ditzy, or “different” when not giving into advances, the cast and crew made this take on Come Blow Your Horn enjoyable. Initially the cast seemed to struggle for energy, but the nerves were eventually shaken off. Then most of my laughter came when the script shifted from Alan Baker’s womanizing to his relationship with his family, Thom Billam’s endearing performance, and the two leads’ skilled physical comedy.

The casting of David Katz as Alan Baker was a great choice. Granted, no casting would have changed the type of person Alan is: a character emblematic of the misogyny throughout Neil Simon’s work and the era. There were, however, moments where it seemed director Melissa Goldman attempted to make Baker’s womanizing a character flaw rather than one of the show’s primary source of comedy. Whether time constraints prevented delving into fully developing Baker in that manner, I don’t know, but the attempts fell short. That, in no way, should discredit Katz’s performance though. It is a difficult task to watch a character you dislike while somehow enjoying the actor’s performance, yet Katz was able to make that possible; particularly with physical comedy. The way he plopped onto the couch when exasperated or slumped around when defeated by his overbearing parents had me bursting at the seams. Katz was at his best when was allowed to throw off the chains of Baker’s flaws, and put himself into the character.

Thom Billam, as Buddy Baker, stole the spotlight anytime he was on stage. With a particular knack for comedic timing, and terrific non-verbal acting, his presence demanded attention. His ability to play Buddy’s innocence while bringing endearing nuances to the character was an absolute delight to watch. He has a brilliant ability to draw out a joke or gag to get more laughs without ever taking it too far. I really, really hope Billam is in many more comedies in C-U.

David Laker and HeatherAnn Layman’s performances as Mr. And Mrs. Baker respectively hit a little close to home. Suffice it to say, watching the two of them was like watching my own family members on stage. That, to me, is the sign of wonderful performances. Laker played a hilarious Mr. Baker that could be completely stoic one moment and then the very definition of melodramatic the next, spewing nonsensical sayings (as fathers are wont to do) and the word of the day: “Bum!” Or Layman’s performance as the loving yet overbearing, protective mother was way, way too familiar. Layman’s ability to build into a crescendo of exhaustion and franticness was brilliantly hilarious.

Celia Mueller and Lizz Morris, both new to the Parkland stage, two entirely different love interests of Alan Baker gave equally enjoyable performances. While constrained within stereotypical depictions of women, they still made the characters their own. Mueller, as Connie Dayton, brought dimension to a character seen as “different” simply because she stood up to Katz’s inappropriate behavior. While Simon wrote Connie to be the “hard catch,” Mueller brought to her an unwillingness to let Katz get away with his antics, and that when and if she played along with him she would when she wanted to and not when he wanted. As for Morris, she leaned into the ditzy character Simon wrote Peggy Evans to be, but brought a sweetness to her. Sure there cringe worthy moments when she didn’t catch on, yet an endearing quality that made Morris’ performance heart-warming.

Now for a moment of full disclosure. I’m a history nerd. I studied history, and at times I can be that jerk that calls out historical inaccuracies in media. It’s just nitpicking that I can’t always control, which is why the set and costume design made my heart swell. Of all the student productions I’ve seen, it was evident that this crew cared the most about historical accuracy and did extremely extensive research into the era. Every “t” was crossed, and every “i” dotted. From the lighting (lighting designer Jared Charleston mentioned during the talkback the amount of research he did to understand how apartments were lit in the late 60s) to light switches to the color palette, hairstyles, and costumes (a terrific job by Remy Saymiknha), everything was perfect. And, in case you were wondering, yes. Touch tone wall phones were released in 1967—thanks go to stage manager Maya Hammond for making that little factoid known.

In the end, this particular cast and crew ran like a well-oiled machine, and is a terrific representation of Parkland’s Theatre program. Sound design, and the sound board operation was spot on—not a cue was missed which is particularly amazing considering the myriad of ringing phones and doorbells that were needed throughout the show. The set and prop design was simple and meticulous—not a detail was overlooked. Most of all, Melissa Goldman has shown that she is a talented director with a bright future ahead of her. Even in a comedy, it is clear she knows how to guide an actor in the character building process, and to give them space to bring their interpretation to life.

Unfortunately, the rest of the shows are sold out, but do continue to support the students and the Parkland College Theatre Department in other ways (prop rentals, donations, and more). More information can be found at their website here.