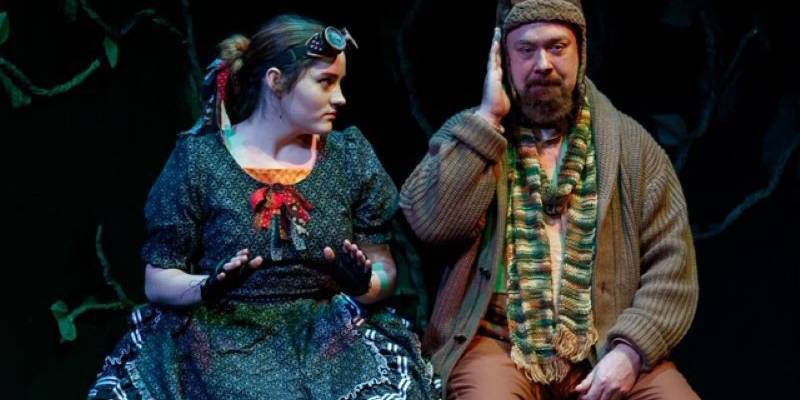 In the grand scheme of things, missing theatre is not even close to the hardest part of the current pandemic. But, I would be lying if I said I don’t miss it terribly; that I wish I could sit in an audience and take in a play. I miss the magic of a perfectly choreographed dance number, or a vocalist that guides you through an emotional journey during a solo, or the chemistry of scene partners engaging in a heartfelt. I especially miss this within the Champaign-Urbana theatre scene. So, once I finished lamenting about this I began mulling over my favorite shows or moments that I wish I could relive.

And that mulling resulted in the below list. Just as a disclaimer, I did not start paying close attention to C-U theatre until the Fall of 2017, so I apologize for leaving out any productions that ran prior to that, or any productions I was unable to attend.  Also, the list is in no particular. However, it will include two shows directed by Latrell Bright, a sleazy Hollywood agent, fantastic choreography, amazing vocals, and more.

Without further adieu, I give you my favorite shows and moments in the Champaign-Urbana theatre scene.

The entire production was a magical experience. Set design was simplistic, yet   fantastical. Many of the performances were perfect, and did a phenomenal job of bringing life to beloved characters in a brand new way. However, there were two moments in particular that I wish I could watch over and over again: Whitney Havice’s choreography during the “Jitterbug”  sequence, and Lincoln Machula on the giant Virginia Theatre screen as the Wizard of Oz. These sequences will always stand out because of how mesmerized I found myself. The brilliance of Havice’s choreography— the cast’s performance of said choreography was just as essential—and Machula’s execution of his pre-recorded performance left my jaw on the floor.

I believe Fun Home was either the second or third show since I had chosen to really pay
attention to local theatre, and review for Smile Politely. And because of that I didn’t have a full grasp of the talent that exists in this town. This production showed me, from director to cast to stage crew, the utter star power we have in this town. From Jess Schlipf’s stunning voice and acting talent to Jenny Gleason’s heart-warming yet heart-wrenching performance to Jackie Loewenstein and Michael Steen’s chemistry to Latrelle Bright’s directorial choices, Fun Home was the moment I fell head over heels in love with theatre.

Memphis was an absolutely stunning show from curtain to curtain. Stellar music, stellar performances from the entire cast, and I even got a kick out of how the jokes poking fun at cultural appropriation and the commodification of Black music went way over the heads of the typical C-U theatre audience. But the part that stood out the most was also the most unexpected part: Jake Fava’s singing voice. Pardon my language, but my first thought the moment he began to sing was: “Holy shit! Who is this guy?” I honestly did not know voice with such soul and grit existed in this area. With a voice that was almost a mixture of Jon Fogerty and Harry Connick, Jr, I think I could have listened to Fava sing on an endless loop.

The Moors was a rare show for me. One that I will never hesitate to call perfect. It was the perfect comedy, and perfect drama wrapped up in one very beautiful package. The show still has me speechless. Suffice it to say, I would be willing to argue that this show belongs in the top five best shows of the decade for Champaign-Urbana theatre.

Jace Jamison’s performance as the sleazy agent in I Hate Hamlet.

In my review of I Hate Hamlet I described Jace Jamison’s Gary Peter Lefkowitz as bottom of the popcorn tub greasy. Jamison absolutely nailed this role with perfect comedic timing, and incredibly precise choices about his posture, gait, gestures, et cetera. Paramount in comedy, especially when playing a character, is commitment. Jamison’s commitment to this character, or any character for that matter, and talent in bringing that commitment to fruition should never be doubted.

Elephant’s Graveyard sits up on the same pedestal as The Moors. The set design, almost spoken word like delivery of lines, and the very deliberate choices in movements were all new to me, but very quickly they were what kept me enthralled. The cast’s performances made you feel every tiny bit of their emotions, and it lead to there being absolutely no dry eye in the theater. The show was another perfect example of Latrelle Bright’s talent to give a loud voice to the voices that need to be heard, and to help you feel the emotions behind that voice. Another of this town’s all-time greats.

I know not everyone will be happy with my list, but these are the moments and shows that have had the most lasting impact on me.

My heart aches that our theatres are not producing any shows right now. We must remember what these theaters and shows mean to us, and flock to support them when they re-open.

Top photo: Photo of brunette woman with Steampunk glasses on her head and green period dress seated next to man with beard and fleece winter hat with ear flaps, scarf, sweater and trousers. Photo by Jesse Folks.