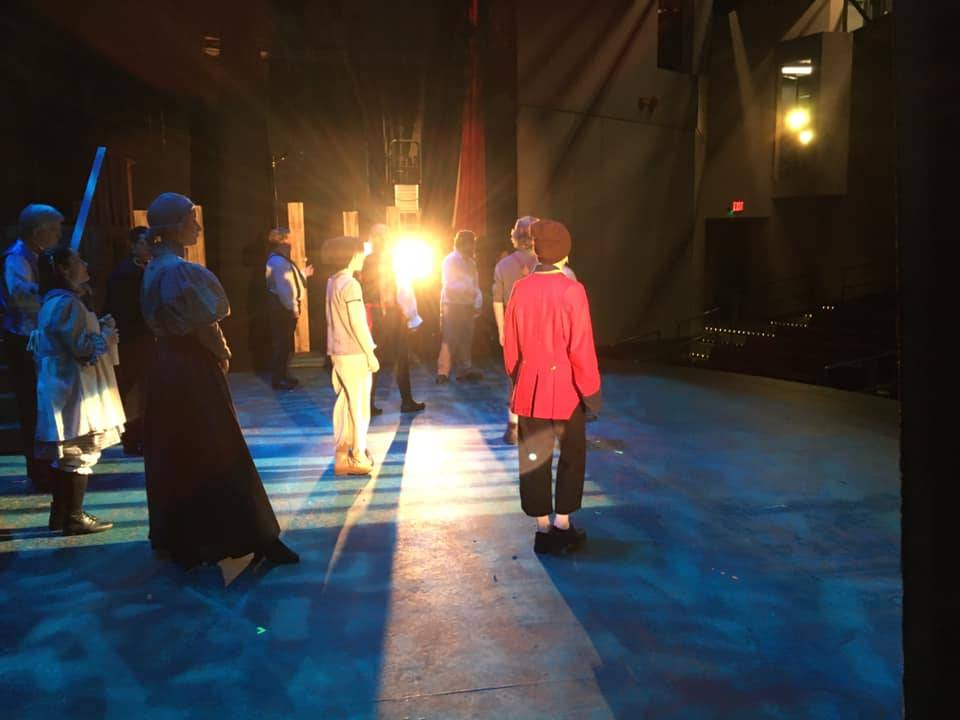 The energetic ensemble cast of Peter and the Starcatcher, currently playing at Parkland College’s Harold and Jean Miner Theatre, brought this quirky script to life through visual storytelling carefully crafted by director Mathew Green. Peter and the Starcatcher by Rick Elice is based on the novel by Dave Barry and Ridley Pearson and features music by Wayne Barker. Music director Melissa Goldman accented the show with live mallet percussion, a pleasant edition to the performance. Impressively, actor Stephanie Swearingen played the piano for the show as well as designed properties.

Peter and the Starcatcher answers all the questions you never knew you had about the famous Peter Pan story, and plants Easter eggs for the well-known narrative. We learn how Captain Hook lost his hand, the ticking crocodile that haunts him, and the origin of Tinkerbell; among other exciting tidbits. Jess Schlipf led the cast in the title role of angsty yet brave Peter, opposite Emaline Johnson as fierce heroine Molly, a starcatcher’s apprentice. Jace Jamison nails the role of Black Stache and Rachel Hejmanowski performs a fresh Smee fit with. Their comedic timing melds perfectly with their pirate counterparts.

The show provided the audience with comfortable characters, but also added new ones to the mix. Molly sets out on a mission for the queen with her master starcatcher father, Lord Aster, played by Lincoln Machula. Along with Molly is her nanny, Ms. Bumbrake (Zoë Dunn), an exuberant a goofy woman who pairs with confident sailor Alf played by Tommy Howie. Parker Evans and Thom Billam play Prentiss and Ted respectively, youthful counterparts to adolescent Peter Pan, despite their status as street urchin orphans. Laura Alcantara owns the stage as Bill Slank, and Wesley Bennett plays the firm Captain Scott. Additionally, a clan of kooky cooking-ware clad islanders adds a new element to the story.

Scenic designer Nick Shaw proves less is more with his elegant and functional set. The minimalistic use of two moving staircases was versatile, and hanging green cloth as trees pointed you in the direction of a forest without being too over the top given Act I’s toned-down scenery. Director Mathew Green provided simple and creative solutions for hard-to-stage moments, such as characters swimming and nearly drowning in the ocean. Swearingen’s props add a literal layer of shine to the stage.

Sheri Doyle’s costumes blend time and space but roots the narrative in the late 19th century in England. One of the highlights of the costume design was the charming ensemble mermaid get-up, where innovate scaly mermaid tails doubled as feminine fans. The actors wore decorative wigs designed by Maya Hammond with additional hair and makeup design by Hailey Denzer.

Dimension was added by lighting designer Konrad Ciolkosz. Lovely tones of blue and yellow swabbed the stage during Act I when the action was out at sea, and earthy hues were added in Act II where the action was grounded on land. The waves of blue lighting during the pre-show and intermission transcended the audience into the tale. Nick Harris provided sound moments crafted to highlight the play’s family-friendly comedic lines.

The accents, although intriguing and generally commendable, were a bit hard to understand at certain points, particularly when the action and pacing accelerated. During the post-show talk-back, actor Laura Alcantara noted that the most challenging part to put together during the four-week rehearsal process was the “hive mind” scene. “You have to get into the brain of the person you’re standing next to and live in it for a little bit.”