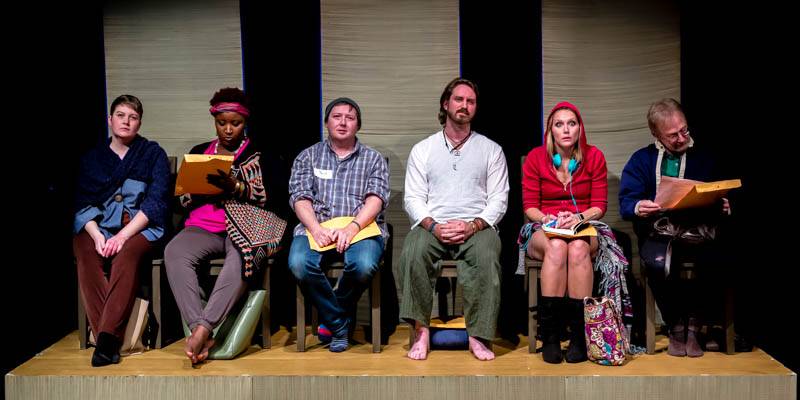 The moment you part the curtain to enter the Station Theatre to see Small Mouth Sounds, you are welcomed by soft, nature music and a very simple, aesthetically pleasing set, with only one person sitting in the six chairs that are onstage. This perfectly sets up the atmosphere of the play, and the note from director Jaclyn Loewenstein encourages you to turn off your phone and breathe deeply. It is a very similar feeling to stepping into a yoga studio; you feel the stress melt away as the light dims and the play begins.

From the moment the characters make their first entrance, you can immediately tell what kind of person they are, though you have no idea why they are attending this silent retreat. The silence is quite shocking at first. The silence fills the room, but it is anything but dead. The cast works together as an incredible unit (though they are all incredibly different), showing that you do not need words to make people laugh. And trust me, you will laugh at the physical comedy that the cast has blended into the show so smoothly and naturally. The only thing I thought that broke up this harmony was the length of time it took to transition between scenes. However, I tip my hat to Jaclyn for the sheer amount of effort it must have taken to direct a show with so much depth and meaning that has so little dialogue.

The characters themselves are unbelievably relatable. You get to sit along side them as they struggle to find happiness and meaning in this “out of the ordinary” retreat.  Thomas Nicol (above), playing Rodney, perfectly portrays the silent “master” of meditation and tranquility from the moment he enters. He carries himself with an air of confidence that shows up especially when he decides to take a quick skinny dip. His slight cockiness and utter confidence in himself, however, is shattered in the moment you find out why he is attending this retreat. This moment of breaking that “zen” exterior and showing the flawed man was brief but breath taking.

His roommate in the show, Ned, played by Jason Dockins (above, left), was the exact opposite of Rodney, providing a humorous dynamic in their small-shared living space. But Jason’s physicality of Ned is prevalent as soon as he made his entrance; the small twitches, the fidgeting, the hunched shoulders — all scratch the surface of why Ned is the way he is. Ned’s monologue will have you in tears. Jason does a beautiful job of conveying the pain this character has gone through with just the right amount of humor and honesty that is so hard to find, much less master.

Next to enter are Judy, played by Katie Baldwin Prosise (above, left), and Joan, played by AJ Curry. This couple beautifully portrays the difficulty of handling hardship in a relationship, and the need to communicate and understand through that hardship. They need love from each other, and to see them desperately try to get it from each other is touching and real. Alicia, played by Faith Ramsey, has the exact opposite of that problem, as she struggles to navigate her emotions post breakup. She first enters as a “typical” millennial (phone always out, doesn’t really want to be there), but as she faces the reality of her situation, the floodgates open. It is heartbreaking to watch, but you simply can’t look away.

Finally, the most mysterious of them all — Jan, played by Gary Ambler (below, left). He is the only one who follows the rule of silence at this retreat.  You can’t take your eyes off of him when he commands the space. The constant need to help the others, the incredible charisma that oozes from him with each movement he makes, and the number of times he will make you laugh can’t be missed. His smile will make you smile.

In short, this is a one of a kind production. It manages the careful balance of humor and tragedy. It feels as though you are watching real people struggle to find meaning in their lives, and how to navigate through the hardships and trials life has thrown at them. Vulnerability, honesty, and humor make this show one that does not need words to affect the way you are living your life. So breathe in, breathe out, and bask in the silence.

The play has remaining performances for November 16-18 at the Station Theatre in Urbana. Ticket prices, which have changed this season, are as follows: $15 regular admission; $10 for students and seniors. All shows are at 8 p.m.