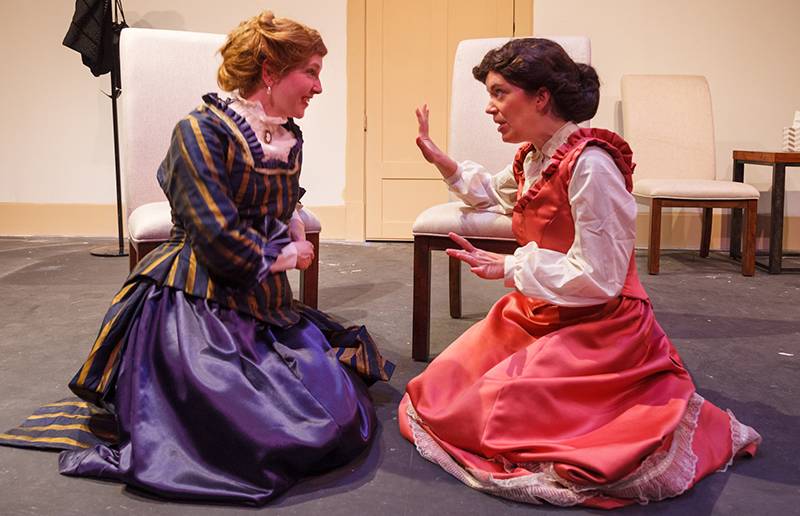 I’m not sure how I managed the grade, but when I was 15 years old I pulled a B+ on my sophomore year English test on Henrik Ibsen’s 1879 drama, A Doll’s House. This came as a surprise to me considering I had snored in the back row the entire time we read the play in class. While 15-year old Katie was very interested in theatre, she was not very interested in hearing a pubescent boy croak out Torvald’s lines in tragic monotone. I eventually revisited the play in the early years of my studies as a Theatre major and learned to appreciate the gravity of the play. Perhaps it was because I was able to digest the story in the comfort of my own home and not in a fluorescent, slightly musty classroom.

The story of A Doll’s House focuses on Torvald and Nora Helmer, a traditional Victorian couple with an unsettled home life. After having forged her father’s signature to take out a secret loan for the newlywed Helmers to travel Italy, Nora’s financial secret is revealed to Torvald upon a blackmail scheme orchestrated by one of his bank employees. Torvald reprimands Nora for her actions in an explosive manner, threatening to keep the kids away from her so they cannot be ‘corrupted’ by their mother. When the bank employee ceases his blackmail scheme, Torvald’s forgiveness is not enough for Nora. The play concludes with with Nora leaving her marriage to Torvald in a dramatic final stage direction, wherein she shuts the door right behind her. A subversive, powerful move.

But what happens when the door to the Helmer household opens again? Playwright Lucas Hnath answers this question through his 2017 play, A Doll’s House, Part 2. Fifteen years have passed and a liberated, independent, and successful Nora knocks on the door of her former residence with divorce papers in hand.

A Doll’s House, Part 2 is hot off the presses having left Broadway less than two and half years ago. C-U has the opportunity to see this classic story continue in its Midwest non-professional premiere at the historic Station Theatre. Recently I was able to discuss this anticipated production of A Doll’s House, Part 2 with Producer Kay Holley and Director Rick Orr, who is also the Founding Artistic Director of the theatre.

Smile Politely: Many of us are familiar with Henrik Ibsen’s original play A Doll’s House, but not everyone has had the experience of reading or seeing it. Will those who are familiar with the original text have a leg up when it comes to understanding the story? For those who aren’t as familiar, what should they know before they come into the theatre?

Kay Holley: It is the playwright’s hope that the new play can stand alone. I happen to agree. Is it possibly a richer experience if one is familiar with Ibsen’s classic? Maybe. However, Part 2 is quite current and very engaging in its own right. (Not to mention that it is funny.) There is enough re-capping in the play to bring modern audiences up to speed. I think the play will reward all kinds of audience members.

SP: Ibsen started the story in 1879 and Lucas Hnath continued it in 2017. Why, after 138 years, would Hnath pick the story back up again? What questions does Hnath explore about today through the context of the late 19th century?

Holley: In a Vogue magazine interview, Hnath says that he was interested in “getting the audience to think about the relationship between themselves and the dilemmas of these characters from the late 1800s . . . to try to see through something that feels familiar and make it new.” Hnath examines timely questions about men, women, and power; about marriage; about actualizing one’s full, authentic self — which were themes already present in the original. In addition, he examines not only one’s right to make bold, even shocking, choices but also the reality of facing the personal consequences those choices bring. The playwright has very consciously crafted the play to create a kind of bridge between Ibsen’s time and our own.

SP: This play was originally commissioned by South Coast Repertory in California and quickly transferred to Broadway where it picked up eight Tony nominations and 1 win.(Laurie Metcalf for Best Performance by an Actress in a Leading Role in a Play.) Though it has since then closed, A Doll’s House, Part 2‘s success has expanded on a national level with regional theatres across the country producing the play, including a current rendition playing now at Chicago’s Steppenwolf Theatre. After a Google search, I was not able to locate any non-professional productions. Is the Station one of the first community-based theatres to produce this show?

Rick Orr: I believe that we are one of the first. I’ve been told that we are the first non-professional company in the Midwest to produce the play, which is something that we are very proud of.

SP: The Station’s production of A Doll’s House, Part 2 has a cast of well-known and praised Celebration Company members; Gary Ambler as Torvald, Lindsey Gates-Markel as Emmy, Barbara Ridenour as Anne Marie, and Cara Maurizi as Nora. What new qualities have this dynamic cast brought to classic characters?

Orr: Someone said that this is “a modern play in Victorian drag,” which I love. There is a solid 19th century base under the play, and yet the set is a very clean, sparse version of a Victorian room. The costumes are of the period, and yet the props are all modern and the language is very much that of today.

Holley: The artistic vision of the play melds the style and thinking of the late 19th century with the way we think, talk — and even move — now. Because of this, we can really contemplate the ideas and themes of the “old world” and how they still reverberate. This fine line is best walked by mature and very talented actors, and I think our actors are just that.

SP: Have their choices in Part 2 impacted the way you think of Ibsen’s original play?

Orr: In its time, A Doll’s House was very controversial. In some countries, the play was banned because the idea of a woman abandoning her husband and her children in pursuit of her own best life was unthinkable. The actors are revealing the fact that those attitudes carry over into the modern world.

SP: As the Founding Artistic Director of the Station Theatre, you have directed for the Company numerous times over several years. Last year, audiences saw your daring and adventurous play Cock by Mike Bartlett (of which I had the pleasure of interviewing you about). This play, though also daring and adventurous, is very different in its nature. As a director, what draws you to a play? What drew you to this specific play?

Orr: I have found that my work as a floral designer and as a director are fueled in similar ways. Specifically, the plays I am attracted to are the ones that I begin to see in full color as I read — the ones that I can see with clarity in my mind’s eye — with actors and specific stage pictures. I am often drawn to works that call for minimal set, few stage trimmings and only a few props–plays where the focus is on the actors and their relationships. With this play, I felt that the playwright had a brilliant concept in making this a modern drama, and I was attracted by the social context wrapped around the smart and humorous insight.

SP: Any last thoughts or reflections?

Holley & Orr: Thanks for your interest in our production!

A Doll’s House, Part 2
The Celebration Company at the Station Theatre
223 N Broadway Ave, Urbana
February 21st to March 9th
All shows at 7:30 p.m. with the exception of a 3 p.m. matinee on March 3rd
Tickets: $15