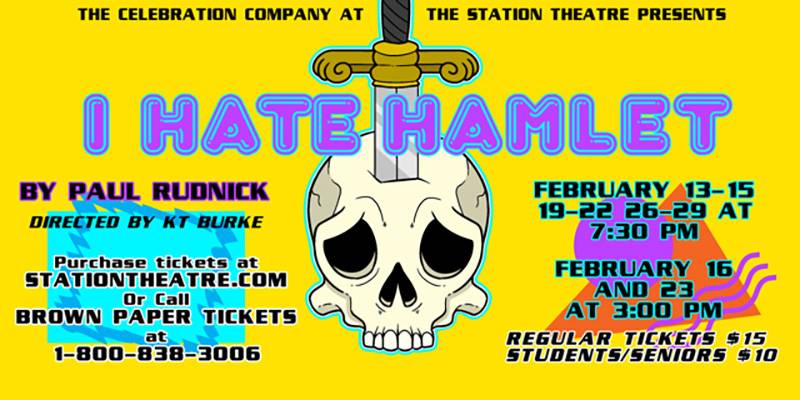 By these powers combined, I Hate Hamlet!

In all seriousness, those four attributes make up the foundation of a quirky, hilarious show that provides one hell of a night at the theatre.

Set completely in the former residence of John Barrymore (the greatest American Hamlet), now occupied by our protagonist Andrew Rally (Andrew Simek), I Hate Hamlet picks up as Rally (a successful television actor) has moved to New York City to take on the role of Hamlet in NYC’s Shakespeare in the Park. Unfortunately for Rally, and most unfortunate for his girlfriend Deirdre (Madelyn Childress), he wrestles with severe and anxiety over the role. After what seems to be a failed seance, John Barrymore’s ghost returns to his not-so-humble abode with one mission: to assuage Rally’s fears, and train him to become the next great Hamlet.

Along the way Rally finds himself pulled in two different directions: continue pursuing Shakespeare which would make Deirdre extremely happy, or return to television which make him and Gary extremely rich people.

I Hate Hamlet is, without a doubt, hilarious. Although the show gets off to a slow start with an awkwardly paced opening scene, once the momentum picked up the cast delivered brilliant one-liners, hilariously endearing moments, and one terrifically choreographed sword fight that kept the audience belly-laughing until the final curtain.

Additionally, if the great debate over Shakespeare, or at the very least my own inner monologue about Shakespeare, was acted out on stage, it would look very much like many of Barrymore and Rally’s exchanges. Through the two we enjoy a back and forth about the beautiful attributes of Shakespeare’s work, and the most frustrating aspects of the bard’s plays. Along with this debate, the cast does a fantastic job of pulling the audience into a story about an actor’s battle with their self.

From the get go, Andrew Simek (Andrew Rally) does an effective job of portraying Rally as an actor, although already successful, that is attempting to not only rekindle his career but establish his identity as a well-rounded one. For some it may be hard to relate to a successful actor rekindling his career, but Simek does a terrific job of making him relatable to all people. By bringing Rally’s insecurities and imposter syndrome to the forefront, he makes the character one that all of us can relate to.

Kevin Wickart is at the top of his game as the hammy ghost of John Barrymore. I have had the opportunity to see Wickart in several different roles. In each role he has proven his terrific range as an actor, but this performance as John Barrymore may be his best yet. He perfectly embodied the bravado and persona of Barrymore while being an endearing mentor to Simek’s Rally. He captured my attention, and did not let go until he exited a scene.

Aside from the tremendous chemistry between Simek and Wickart, the most enjoyable aspect of their performances were the things that went unsaid.

Beneath the comedy and all of the, well, theatrics is an examination of the insecurities and regrets actors may face and the constant battle one may have with imposter syndrome. Wickart superbly clues us in to Barrymore’s insecurities and regrets about the decisions he made while alive. His performance was a masterful demonstration of understanding subtext, and using said subtext to motivate his portrayal of Barrymore.

Jace Jamison plays the sleazy, bottom of a movie theater popcorn bucket greasy Hollywood director Gary Peter Lefkowitz with tremendous comedic skill. Not only does hit the nail on the head with all the best stereotypes of directors—self-obsessed, love for money, and always looking for the next way or person to make that money—Jamison also makes small, nuanced decisions that had me snickering even when nothing funny was said. From his own little knock, to the cheesy dance moves, to even the cadence with which he delivered certain lines, Jamison kept me laughing and smiling cheek to cheek every time he was on stage.

Madelyn Childress makes an absolutely terrific Station Theatre debut. She shines as the melodramatic, Shakespeare obsessed, and eccentric Deirdre, and offers a great counter balance to Rally’s inner struggles. Although some choices came across as a little over the top, they fortunately fit Deirdre’s character quite perfectly.

Misty Martin’s (realtor Felicia Dantine) and Mary Rose Cottingham’s (Rally’s agent Lillian Troy) moments on stage, albeit brief, were jam-packed with snarky one-liners, and tenderness. They made the most of their limited time on stage, and certain moments would have not succeed without them.

In the end, I Hate Hamlet doesn’t offer just a night filled with laughter. It offers a story about insecurities and coming to terms with one’s self that anyone can relate to. IHH may be a show for actors on its surface, we all suffer imposter syndrome at some point; that we don’t belong in a certain role or that we don’t deserve said role. That we could never be as good as anyone else. IHH shows that we all battle it. And even though we may not all have the ghost of a famed actor to help us through it, it is a battle we all can win.

Top image: Poster for I Hate Hamlet of shows an illustrated skull with a dagger coming down into it, with bright-colored geometric flourishes on left and right side of the skull, with a yellow background throughout. Text about the show’s performances in a white font overlays the images. Poster by Jack Nave.