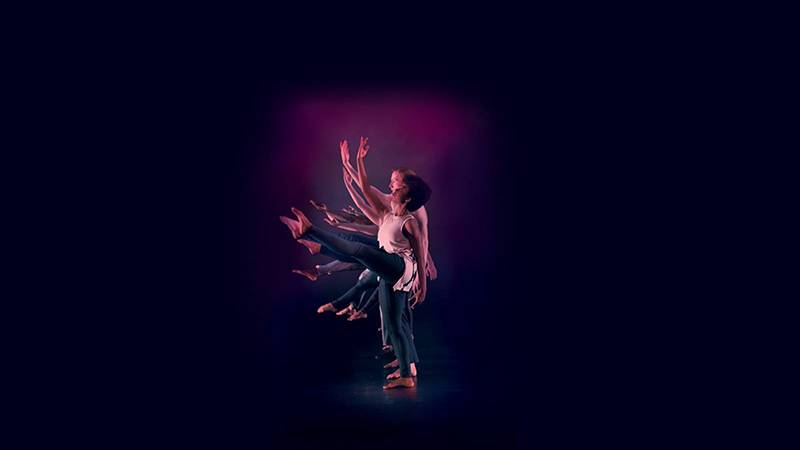 With such a robust offering of big name performances coming to Krannert Center for the Performing Arts this season, it’s important to draw our focus back to Krannert’s key educational mission as a premier performing arts laboratory.  And judging from the sold-out-additional-seating-added turn out at last Saturday night’s performance of Studiodance II, I’m not the only one who feels this way.  And that, as they say, is a good thing.

If you’re new to the event, Studiodance provides an opportunity for Dance at Illinois MFA and some BFA candidates to showcase their choreography and dance performance skills. It is the ultimate in thesis defenses. And as someone who delivered her lovingly nurtured creation in anenvelope rather than live in front of an audience, I have to say it would have been nice to hear the applause and feel the love, to know which lines or movements resonated most with your audience and which didn’t.

The night, although delayed due to the arrangement of the aforementioned additional seating, was wellworth the brief inconvenience. Carefully curated by the faculty, the selected pieces flowed one into the other thoughtfully, sometimes as amplifications of or counters to the previous work.

As an arts editor, and as a long-time lover of dance, I look to nights like this to continually expand my notions of what contemporary dance is, how and what it can communicate, and how it stays fresh, relevant, as well how it can collaborate with other performing arts. Studiodance II gave me all that and more.

While the level of skill and talent were consistently high, the range of style and approach to meaning-making were as broad as they were personal. This is a highly-sophisticated, thoughtful group of creators whose program notes provided windows into their processes and their intentions.  One could make the argue that the work should succeed both with and without the scaffolding these words provided.  And in many cases they did.  But the more I think about it, the more I’ve come to believe that this media-smart group of meaning-makers know the value of controlling the message and getting in front of the narrative. Or perhaps the words they shared are an additional layers of performance, part of the multi-disciplinary laboratory experiment.

The evening began with Haley Van Patten’s “the laughter of children,” a solo she both choreographed and danced.  Inspired by a space she encountered that called itself a “children’s garden … a place for children to connect with nature.” Remembering her own three-year-old self never needing to a designated space to “connect,” she created a lush work honoring the simple joy of just being onself. Richly layered with video of the choreographer moving through nature interspersed with wonderfully grainy home movie footage, music and audio recordings of poetry, “the laughter of children” engaged all the senses. Illustrating the capacity of dance to move with music, poetry, and film, Van Patten danced with and in contrast to both her younger and in-nature selves.

After a brief pause we moved into Nicholas Hittle’s “vinyl historia,” which provided a powerful contrast in both subject and style. With this piece Hittle set out to explore “what causes memories to surface in our minds” finding that the smallest sensations, even “the gravel underneath our feet,” could trigger a memory, and infuse meaning. As spare and raw as the previous piece was layered, Hittle tested the space around him, running forward, falling backward, almost challenging it for a reaction, for a spark of memory, no matter how dark or painful.

“Somwhere between” delivered a charasmatically performed collaboration between dancer/choreographers Bevara Anderson and Danzel Thompson-Stout. Noted in the program as simply “work in progress,” I quieted down my meta meaning-making mind and let myself fall in love with the way these two artists used space. Moving in contrast, in parallel, and finally in a dynamic dialogue of gesture, expression and use of space, “Somewhere between” seemed to examine how we making meaning of ourselves as individuals and in relation to others. Anderson and Thompson-Stout are both elegant dancers and charismatic performers and their collaboration on-stage and in choreography was practically seemless.

Up next was the wonderfully surprising “For Your Consideration,” a performance art/dance performance piece full of audience participation, breaking of fourth-wall, and theatre-going cell phone etiquette (solicitation of feedback and questions via text). Dedicated to “physical therapists everywhere,” this boundary-breaking work featured dancer/choreographer and former member of the Upright Citizens Brigade Evvie Allison, and dancers Elliot Emadian, Kaitlin Fox, and Rachel Rizzuto. This was ensemble work at its best.  Ad-libbed and layered with meaning-making PT props, video, screen shares of the PT’s laptop, and ending with a biodegradable jumper wearing troupe balletically performing PT-based moves to Kate Bush’s “Rubberband Girl,” “For Your Consideration” brought a heaping dose of laughter and fun into a deeply-consdered genre-bending consideration of movement.

Following from here was “Malamente,” an homage to dancer/choreographer’ Alyssa Teijeiro-Ficht’s love for Spanish and Latin dance styles. Teijeiro-Ficht put a contemporary spin on tradition with the inclusion of Rosalia’s pop-flamenco song “Malamente.”  A powerful performer, Teijerio-Ficht radiated strength as she brought the power of a modern modern to these traditional moves. Her footwork was masterful and hypnotic. Yet her gestures and gaze for strong as if aware of her ability to seduce she would rather linger in her own power, as if she were saying “here I am,” and “I am here for me.” This deeply personal, beautifully executed work was one of my favorites.

William Ervin’s riveting solo piece “I-will I-Will I-WILLLL” explored notions of self-determination,  fulfillment, and the quest for substance, love, and learning. Beginning as a mere marionette with no free will of his own, Ervin’s character moves through a fascinating arc towards independence. First learning to dance the puppet master’s steps to perfection and soon beginning to push past these limitations moving against and independent of the ties that bind him. Ervin is a spectacular dancer who was met the challenges of this choreography head on.  It was poignant and powerful where it could have easily been cartoonish and over the top.

Taylor Adams’ solo work “3:33” took the metaphor of parasitic feeding as its germ, noting in the program “A parasite feeds, wriggling itself through the spine. It travels between each vertebra. Slipping in and out of the seams, unraveling its host bit by bit. Spools of blood red thread gently unraveled. A knock on the ribs produces a hollow sound, a battle lost. Revel in this victory.” At time the parasite and at times the host, Adams’ range of movements took us in the physical and mental pain of the metaphor. The fact that dressed in an oversized man’s suit in a production where no decision is without intention or meaning made me go meta wondering about the role of gender in this equation.

After hearing such great things about Jaylen De’Angelo Clay’s contemporary jazz class at Urbana Dance Company, I was anxious to see his solo piece, his spin on contemporary dance. In his program notes he shares “as an artist is my relationship with how technique can be

seen as a form of enslavement. I am always learning something new. I am always developing something that I have been taught, but to serve in what way? In my mind there’s this never-ending negotiating as to how the technique I have learned and am still learning can be used to redefine space, structure, time, and myself. My movement has established a new identity created from the numerous amounts of history held in mind, body, and spirit. I’m calling my transformation a notion of “in·fin·i·ty.” in·fin·i·ty is a solo infused with untold explorations of dance technique, creating space for more energy, more time, more space that intersects with hidden stories from the soul.”

It was fascinating to watch Clay explore each movement, each piece of traditional dance vocabulary and test it, break it, and remake it. Taking up more and more space until he locates his own shapes and gestures. A strong and expressive dancer, as well as deep thinker, Clay’s work raises important questions about how movement is tied to history and whose history that is?

Last, but certainly not least, there could not have been a better cherry on top of this multi-layered sundae than “period piece.” The brief program note of “It it ain’t Baroque, don’t fix it” hung on the page like a mic drop.  Brimming with Baroque wigs, costumes, furnitures and props, and showcasing the dancing, singing, and acting chops of a Michelle Burns, Syndney Hagerman, Nicholas Hittle, Rachel Maramba, Rachel Rizzuto (choreographer), Danner Self, Jenny Smith, Brianna Undzis, and Cassidy Zins, it was all-star finale meets boundary-breaking comic performance art. Taking us from a simple Baroque dance to a sadist dance lesson, the surrealism came to full bloom as a literal sax dropped from the ceiling inspiring one dancer to treat us to an magical moment of anachronism featuring the sax solo from George Michael’s “Careless Whisper.” Then the actual mic drop happened.  Or rather the actual mic hand-off as a denim-jacketed Baroque dancer introduced a pink Bedazzled mic to the mix and before we knew it we were all in a wild version of Mariah Carey’s “All I Want for Christmas” video.  And yes, this too is contemporary dance performance. Smart, surrealist, joyous in its surprises and the simple (guilty) pleasure of singing old pop songs under gently falling fake snow.  I wouldn’t have missed this for anything.

I laughed, I cried, I felt the pride of parents for their talented children, and the deep respect and love shared between the candidates themselves. They have created a diverse, vibrant and supportive, collaborative creative community that doesn’t shy away from a challenge, a risk, or a good time.

Kudos to sound designers Walter Julian Koonce and Kayla Lee, who along with costume coordinator Larissa Almanza, hair and makeup coordinator Melissa Hall and lighting designer Zack Saunders, served up all of those essential ingredients which brought this feast of movement and meaning to such great heights.

Keep your eyes open for more opportunties to see what’s coming out of this innovative group of dancers/choreographers.