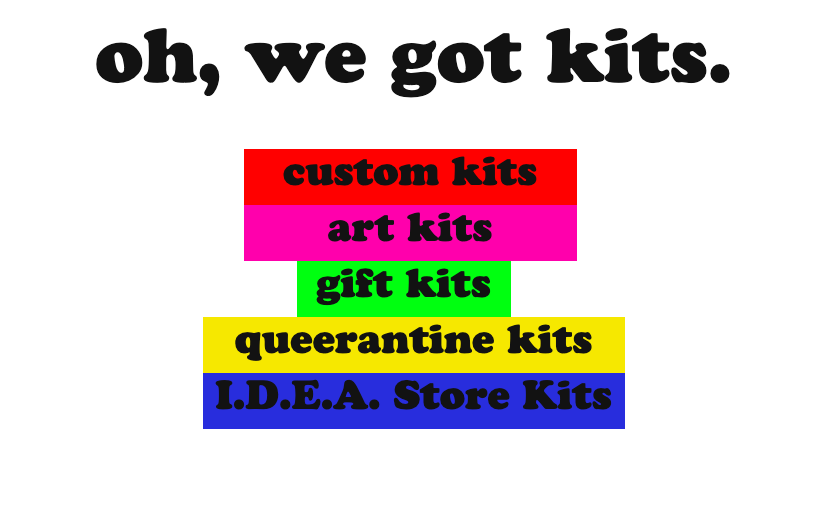 In early March, I joined a new Facebook group put together by chambanamoms.com, Visit Champaign County, and You’re Welcome CU. The goal of the group, titled, “Champaign County Rallies Around Restaurants, Retailers, Small Businesses,” was made for just that: to support local businesses in the area during the sudden closures caused by the pandemic.

In the middle of all of the mouth-watering food delivery posts on the page, something caught my eye: an art shop in Urbana called Art Coop was putting together personalized art kits with different price points for kids and adults alike. Soon after, they made a wide selection of premade art kits. Then they were partnering with different local businesses to make delivery locations. Then they donated poster-making supplies for one of the Paign to Peace marches in town. I was seriously impressed. I was also wondering, how do they do it?

I spoke with co-owner Anna Peters over the phone about Art Coop’s online store debut at the beginning of the stay-at-home order, the shop’s emphasis on supporting small and women-owned local businesses, and what art means to Anna personally.

Smile Politely: Can you tell us about yourself and the conception of Art Coop, Inc?

Anna Peters: My name is Anna Peters and I’m co-owner of the Art Coop. The Art Coop has been around since 1971, so we’ve been in town for a while. We started out as an RSO (registered student organization) at the University of Illinois. After a couple of years, it became an independent business, not affiliated with the university anymore, though we still do business with the university. I took over ownership in late 2016. My business partner, Hilary Pope, bought into the business about two years later.

SP: What’s the story behind the name “Art Coop”?

Peters: Originally, it had a name like, “Art Supply Student Group,” but once it became a separate business it was changed to the Art Co-Op in the early 70s. But co-op laws in Illinois changed, so you couldn’t be called a co-op anymore without having membership fees and members-only perks. That was hard to do for a small art supply store where there was constant turnover; every year there’d be new students and it just got to be too confusing. By that point, the store had been around enough that it had established its name. They just took the hyphen out and it became Art Coop. Our logo (a duck) is named Arthur.

SP: Arthur has a name! I love it: Arthur Coop. Can you share how the online art kits came to fruition?

Peters: We didn’t have an e-commerce space previous to the whole coronavirus pandemic. We have so much merchandise in so many different variations. Without a computerized inventory system, creating an online store with our complete inventory would have been quite difficult. We started with an informational website to just say, “Hi, we’re Art Coop. This is what we have. Here’s a list of art supplies.”

When we found out that we were going to have to close a couple of days before the actual [governor’s] order came down, we realized that if we were going to make any sort of money, there needed to be a different way for customers to shop.

It started with just having Art Coop gift cards and t-shirts that we get printed by Weiskamp.
The custom kit idea is that people pick a price point, pick an age, and then give us an idea of what the person is interested in and we would make personalized kits for them. Some people would give us a big list of specific information and others would just say, “I don’t know, I think they like to read,” or, “surprise them.” If they knew what they wanted for themselves, customers could say, “I need six Sharpies that are purple, and then fill the rest of the basket up until 20 bucks.”

We started putting together pre-made kits based on different interests to try to make the decision-making process easier. If a customer saw a kit they liked, they could pick that instead of having to write us a whole essay on what their favorite color is.

SP: Are there any standouts in your mind of art kits you’ve put together recently?

Peters: Hilary and I both like to give gifts, so we think they’re all pretty fun to put together. It’s kind of a surprise thing; we’re basically being personal shoppers for people. It’s fun to pick things out that look nice together but then also work together because it’d be a bummer to get a bunch of markers and not have any paper at home.

We have had a couple favorites. There was a kit order for a kid about four or five years old. They were into sparkly stuff, but also into skeletal and muscular systems and brains. That combination I really liked putting together. There was also a simple kit where the information we got was just “they like red,” so we picked out our favorite red art supplies: pencils, notebooks, markers, everything.

SP: On your online store, you’ve got quarantine kits, gift kits, premade kits, and even postcards. Why do you think customers like this so much and how do you decide what to make into a listing online?

Peters: We try to pick stuff that we’re excited about. We figure that people who know art supplies or are professional artists, they probably have a little bit better vocabulary to call us or send us a message to say like, “hey, I need a tube of oil paint in Burnt Sienna by a specific company at this size.” Those customers will ask for the materials they need, even if they don’t see it on our website. Then there are people who are wanting something to fill some time or are wanting something for their kid to do. They might not know exactly what they want or need, so they would benefit from seeing options of what we sell. We try to pick things that are new and exciting that we maybe haven’t had in the store before. Brush lettering and calligraphy stuff has been quite popular recently. We’ve gotten some new smaller little pads of paper that are appropriate for that. We just got some new watercolor pads that are circular, which I think are so cool. We want to pick stuff that people will be excited about. If you asked for Crayola in your kit, we would say that “yes, we can do that but here’s some other pretty cool stuff, too.” We’re trying to expose people to materials that maybe they haven’t thought about or heard of before and now have the extra time to explore.

SP: Do you think you’ll continue these online methods following the pandemic?

Peters: Yes, I don’t think we’re going to be able to not do them. I think that it’s going to be a thing that we keep going forward. The website was put together so quickly; overnight, literally. If we get the chance to reorganize the website, I think that’ll probably happen so that it gets a little more intuitive. But I think that this idea of wanting to be able to do this hands-off approach and get orders delivered or do a contactless pickup with businesses will continue. I think that that’s going to be the new normal– that’s such a bizarre phrase, but I think that’s going to be something that’s happening for a while as stores open back up. We are not open to the public. We don’t feel confident in our ability to clean all the pencils and everything that we have in store just yet so we’re still doing all contactless deliveries and pick-ups. It took a pandemic for us to get this online component together. But yeah, I do think that we will keep this going in the future.

SP: You’ve been teaming up with other local businesses and causes during this time of social justice protests and the pandemic. What does it mean to you to have a business that is involved in the community?

Peters: Yes, we started with a remote pickup location at Hopscotch Bakery and switched over to Flying Machine Avionics. The original reason we started working together was that Lincoln Square had the doors to the public locked. We weren’t able to organize pickup from our store. Kelly Whiting of Hopscotch, my friend and neighbor, reached out to me and asked if we wanted to use them as a pickup spot.

We were able to coordinate and then we also didn’t have to do as much delivery driving. There’s also some cross-promotion advertising: maybe you get a coffee when you’re picking up your art supplies. Hopscotch and Page Roasting Company are women-owned businesses, too. I think it’s important to support all of these local, fairly young businesses, they’re important for the local economy. So much of our money goes back into paying our employees, paying local rents or taxes. We want the money to stick around here and we want to be able to buy more from our artists that are working here locally. I think it’s important to support one another in these weird times.

We don’t have a whole lot of extra cash money. We’re not able to do a lot of donations. But we feel that the Black Lives Matter protests are really important, and we had something we could contribute that would be helpful and useful. We reached out to the young people that were organizing the Paign to Peace march to drop some stuff off over there and told them to get in contact with us. There are ways to do that even if you’re not super flush with money. We try to support as much as we can, which sometimes isn’t a lot, but we want to help as much as possible.

SP: Do you have any advice for those who are new to the art game and are just now taking this time to explore their creativity?

Peters: We get messages on our website, Facebook, and Instagram. We’re pretty chatty. So, if you send us a message and you’re like “hey, this is kind of what I’m thinking, give me some examples,” we can send pictures back and forth and say like, “My most favorite pen is this. I like it because XYZ.” We can give you suggestions, depending on how much input you want to give us. We can work with either a whole bunch of information or you can just tell us a small thing and we can work on picking some stuff out. It’s really how much you want to be involved or if you have a really specific shopping list. We can definitely help you with that, either over the phone or through our social media or email. But yeah, if you’re just like, “I think I’m kind of interested in watercolor, but I also want to do mixed media stuff,” that’s plenty of information for us to work with.

SP: Finally, what does art mean to you?

Peters: I’m an artist, and I think especially lately, it’s important to have an outlet. It’s something that’s really important for my mental health. I’ve been an artist for a while, that’s what I went to school for at the University of Illinois, that’s why I’m part of Art Coop. I did a lot of growing up here, so I think it’s a really important community space to have. It’s not essential in the way that medicine is essential, but I do think art is something lots of people rely on as a way to cope and figure out what exactly is going on, especially now.