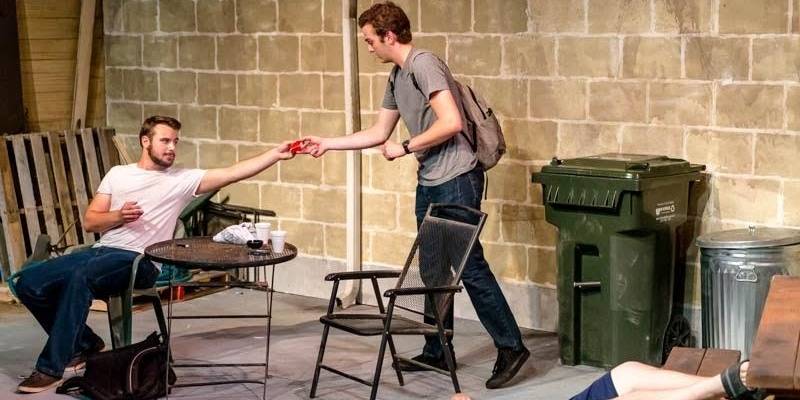 One of the funnier scenes in The Aliens involves a pair of characters fondly reminiscing about choosing a name for a band they had when they were younger. The long and colorful list of discarded monikers runs the gamut from hilarious (Hieronymus Blast) to cringe-inducing (Electric Hookah) to endearingly naive (The New Humans).

One of the more plausible candidates proposed is The Aliens in honor of a poem by Charles Bukowski. Loosely, the poem is about perspective and perception, how one person sees the world and divides it into two types of people. There are “people who go through life with very little friction or distress…[who] dress well, eat well, sleep well…[and die] an easy death”. Conversely, there are the antipodes, the people who are “not one of [the first group]… not even near to being one of them.” While the poem isn’t discussed directly in the play, its spirit underpins the story, as The Aliens by Annie Baker and directed for the Station Theatre by Jace Jamison, is very much a story about perception and how the perspectives of others help to determine how we see ourselves.

For the play, the Station Theatre’s intimate performance space is transformed into an alley behind a coffeeshop in a small Vermont town. It is decked out as an “employees only” lounge area for the people who work at the coffeeshop, complete with a picnic table, lawn chairs, ashtrays and a few shrubs, all of it immediately adjacent to the dumpster. It’s a place that not many would find particularly inviting and that’s just fine by Jasper (played by Jake Fava) and KJ (Tommy Howie), a pair of affable and eccentric “losers” in their early 30s, who appropriate the spot as a sort of adult clubhouse where they read, talk, drink tea, and smoke cigarettes.

Their ruminations on life, love, and art are occasionally interrupted by Evan (Robert Bradley), a student at the local high school, who’s working at the coffeeshop over his summer break. Whenever he comes to take the trash out, Jasper and KJ are there, reading, “concocting” mind-altering beverages, or smoking in silence. Eventually, the three of them start to build a rapport predicated on a very human type of emotional symbiosis. Jasper and KJ feed off of Evan’s innocence and enthusiasm; he reminds them what it’s like to look forward with eagerness and anticipation. In exchange, Evan gets to spend time with guys who’ve been in bands, done drugs, had sex, written poetry and novels, and really “know” about the world. They also bum him smokes. The high school kid shares stories about awkward first forays into love, and the hip alley dwellers share ideas and passages from books they are writing or hope to someday.

This give and take between exuberant curiosity and disaffected weariness makes for some funny but also tender moments. All three characters share curated glimpses of their hopes and dreams as a form of bonding, guidance, and therapeutic catharsis. And much of what they share has to deal with how they are trying to come to terms with their own potential. The idea of “becoming something” pervades these conversations with each character, symbolizing a different stage on that road, from latent potential, to potential seemingly squandered, and potential in the process of being realized.

The only problem is that the glimpses shared are often (purposefully) too narrow. They’re all a bit idealized for the purposes of B.S.-ing one another. Present also among their aspirations are issues like addiction and mental illness, and the inability to accept that you can be your own worst enemy. There’s a surplus of posturing because, it seems, it’s too painful to look inside oneself. To put it more succinctly, it can be as hard to know yourself as it is to know others.

Given the deceiving depth of the script, the performance was delivered capably by the small, young cast. Jake Fava’s Jasper is a brooding, intense dreamer, much more Beat generation than Millennial. He proves equally adept at rage-filled outbursts, serenely strumming a guitar and smoking pensively. Additionally, much of this play is delivered in silence, a silence that takes a variety of forms: meaningful glances, pregnant pauses, characters zoning out, arrhythmic, awkward conversations that end up dying before they begin. As indicated in the script’s notes, “[a]t least a third of this play is silence”. And Fava’s Jasper respects this mandate. However, the mercurial temperament with which he imbues his dramatic charge also provides moments of much appreciated dynamic contrast.

Tommy Howie’s KJ is a wonderfully odd personality. He’s often singing strange songs in a loud, clear voice, and prancing around making cryptic proclamations in a way that, at his most manic and animated, remind one of Jack Black’s zaniness. Finally, Robert Bradley was pitch perfect as a somewhat insecure and unsure of himself 17 year old, Evan. His performance was, at times, palpably awkward (in the best possible way) and his wide-eyed, not-sure-how-to-light-a-cigarette-properly innocence provided a nice foil to Howie’s unhinged KJ and Fava’s stoically cool Jasper. The only confusing choice made was in casting three actors who all seemed so close to one another in age when the story calls for two of them, Jasper and KJ, to be almost twice as old as the third.

As always, special mention should be given to the Station Theater’s production team, especially Brian Hagy’s lighting design and Noah Scott Larson’s sound design. From the starry interludes filled with the sounds of night insects and cars passing along the road to kaleidoscopic pyrotechnic displays that seemed to fill the venue with explosions of light and sound, their work reminded the audience that the setting is as integral a part of the story as the characters.

The Station Theatre’s production of The Aliens has something for everyone. As a breezy bit of summer theater, you can sit back, enjoy the songs and lights and watch as the three protagonists struggle to come of age. You can also look at it a little more critically as a story about how we end up defining ourselves, in part, by the company we keep and that to be able know others well, we have to know ourselves well first.