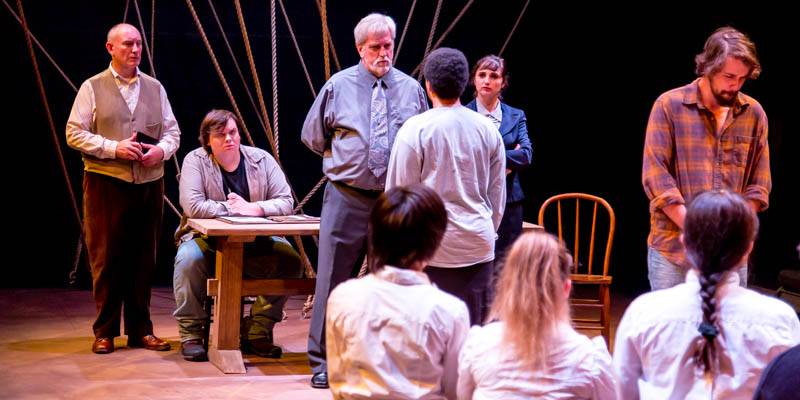 My junior year of high school, I was in what was most likely one of the worst productions of Arthur Miller’s The Crucible ever put on. I sincerely believe that Miller was rolling in his grave when, one night — someone forgot their lines, accidentally skipped ahead, and John Proctor was taken off stage before he had even made his decision of whether or not to confess. Accordingly, our sad production left a bad taste in my mouth where this particular classic was concerned. However, Parkland Theatre’s production of The Crucible, directed by Mathew Green, has brought me back into the fold and made me, once again, a fan.

The play itself is one that I’m sure many will remember from literature classes. Set in the 17th century, its main premise is a fictionalized version of the infamous Salem witch trials. Whether it be to gain more land or seek vengeance on an old lover’s wife, it seems every character has their own motive for partaking in condemning their neighbors and perpetuating the ruse that the devil is loose in Salem. Many are accused and set to hang, however, in an almost Orwellian twist, those accused can be saved if they only confess to consorting with the devil and giving names of others who did the same. Our leading man, John Proctor, who in an attempt to save his accused wife gets mixed up into the middle of it all, is ultimately pushed to this decision: confess, lie, and ruin his name in order to live or die with dignity.

By far my favorite element of this particular production was the set. It was set up in an alley style seating arrangement, with two audience banks facing each other and the stage a narrow strip between them. At either end of the stage were clusters of giant, heavy rope tethered from floor to ceiling at various angles, creating harsh lines crossing each other. Perhaps this was meant to mimic the many crossing threads of truth and lies found throughout the play or perhaps it was meant to foreshadow the many characters who would set to hang. Regardless, it certainly created an interesting visual framework to the stage and watching actors navigate and interact with the ropes was compelling. I only wish it had been used more. This crossing pattern was also subtly replicated with paint on the floor.  Simple wooden chairs, tables, and benches were scattered on the stage between, creating a cohesive, attractive, practical set for the story to take place on. My highest compliments to scenic designer Molly Ilten Fullan. I greatly admire her work.

I also found Nicholas Shaw’s lighting, while often subtle, very well done. It seemed slight shifts in the tone of the light often occurred at moments when a character’s motives or tactics changed. In the opening scene, when Abigail Williams first conceives of the scheme that will fill the rest of the play, the lights shift from a realistic amber light to a more unnatural pinkish tone, signaling the major shift in the direction of the play. Other similar instances may have been more subtle, but did not go unnoticed.

While I appreciated costume designer Sheri Doyle’s decision to avoid full period costumes, I found the costumes to be a bit of an assortment. Some, such as John Proctor’s jeans and flannel or Danforth’s suit, felt rather modern, like they had just walked in off the street. While Giles Corey’s overalls and hat or the young girls’ white shirts and skirts, felt much less modern and much more like costumes. Elizabeth Proctor’s maxi skirt and flannel just felt out of place. Overall, I would have preferred more cohesion.

As far as the cast goes, coming from a student theater background—where every part was played by an actor in their early twenties regardless of what the role called for — I found it incredibly refreshing to see such a large cast with such a variety of ages and backgrounds. It is amazing to me that Ellison Radek, who at thirteen skillfully portrayed the supposedly afflicted Betty Parris, shared the stage with Angela Schneider, who played Sarah Goode, and her husband Nick Schneider, who played Giles Corey, both of whom have over 50 years of experience in the performing arts. What a rewarding experience it must have been to work with a cast with such a wide range of experience in both life and art. What an exceptional production came out of that.

Unfortunately, with a cast of over twenty, I cannot say all that I want to on each member of this large and diverse cast. Instead, I must skip to the highlights. I found Dominique Allen to be a standout among the cast. She played the sometimes wavering, sometimes truthful, always timid Mary Warren with grace. To borrow an old theater cliche, she seemed truly “in the moment” and was a steady presence for her scene partners to play against. I also found Laura Alcantara, who played Elizabeth Proctor, to be strikingly talented. I have read this play a few times before and truthfully never connected with the character of Elizabeth Proctor. I never quite understood her point of view and ultimately came to see her character as somehow hollow. Laura Alcantara, however, made me see Elizabeth in a new light, as a whole and complete person, as a real woman. She colored even silent moments with depth and provided me with some much needed clarity on Elizabeth’s inner workings.

Additionally, Lincoln Machula as Deputy Governor Danforth served as a commanding presence and was undoubtedly a force to be reckoned with.  However, Preston Roseborough, who played Reverend John Hale, certainly held his own against the formidable Danforth, despite being one of the younger members of the cast. He showed a lot of talent, creating a Hale that was sharp, smart, and committed to fighting for the truth. Their contentious interactions were some of the most engaging moments in the play.

In the end, what I found most striking though was how this play, which was written in 1953 as a response to the politics surrounding Joseph McCarthy and his “witch hunt” of communists, has become more relevant than ever. In today’s political climate, where no one can seem to ascertain the truth on many important issues, in part because “alternative facts” are being told from the podium of the White House, the characters’ struggle to figure out what is true and what isn’t is rather relatable. Moreover, other characters’ determination to get what they know to be true heard is not unlike any activist trying to be heard above the noise of Russia and Mar-a-Lago. This play feels like an allegory written today and not half a century ago.

Running roughly two and a half hours, this play is undeniably long and heavy. However, this production is well done and at times very engaging. It is important and poignant and will provide you much food for thought if you allow it.

The Crucible will be performed in the Second Stage Theatre from Thursday, September 28th through October 8th, at 7:30 p.m. or Sunday matinees at 3 p.m. Visit Parkland Theatre’s website for the full schedule details and to make a reservation, or call the ticket office during business hours at 217-351-2528.

All photos by Scott Wells.