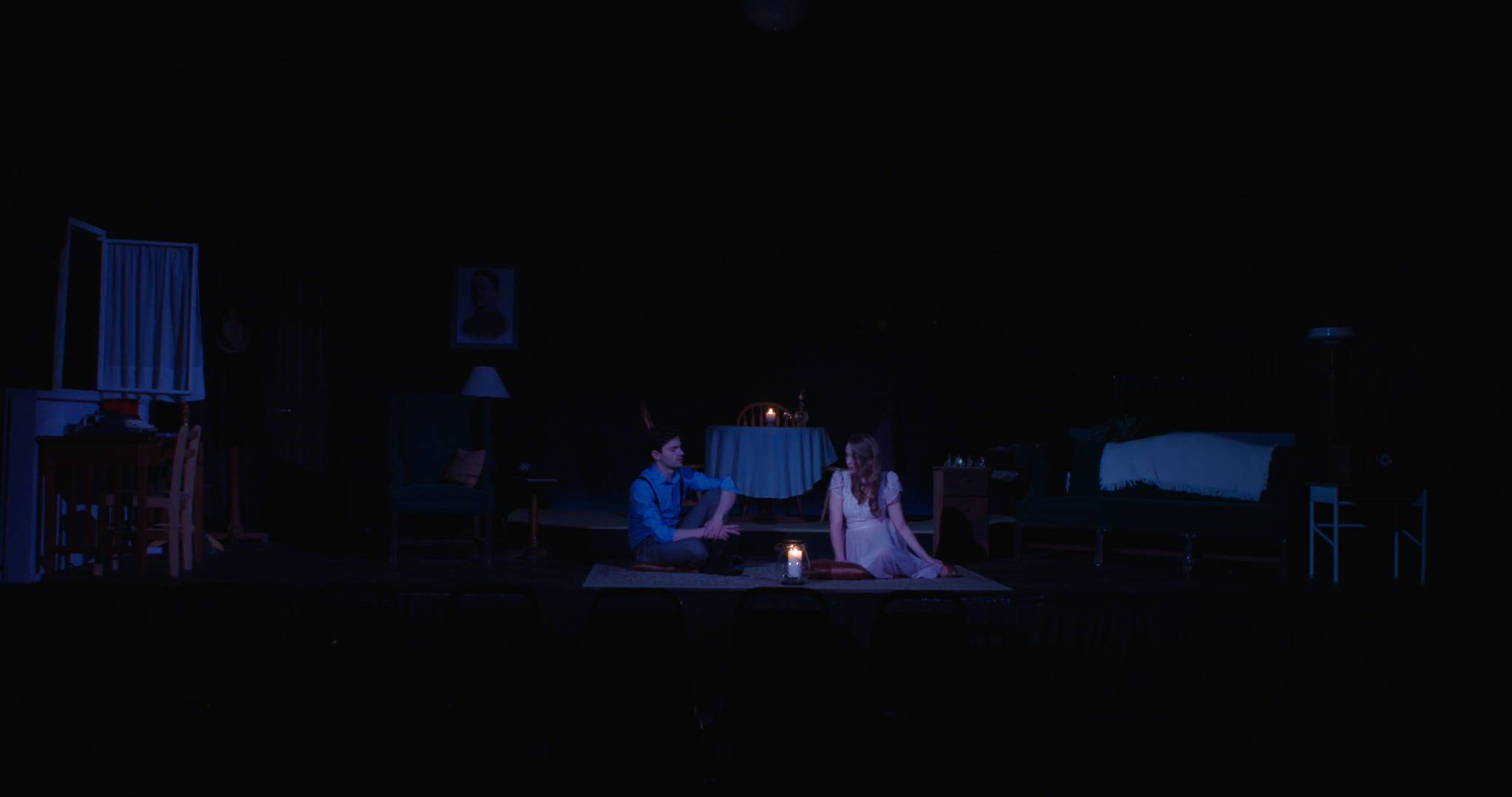 Memory is a fascinating thing. It trims away superfluity; it exaggerates things that, in the moment, were hardly given any weight at all; it reimagines or omits certain moments altogether and haunts us in a way that few other things can. The Glass Menagerie by Tennessee Williams is Tom’s story, and it’s based on memories of a turbulent time in a past that still “pursues” him. It’s not clear exactly how long it’s been – though at least a few years have passed – since the events of these memories took place, but they’re still strong in Tom’s mind, enough to continue affecting him even after he’s strayed far from them (both in distance and in time, which as he points out is its own form of distance). In this production by Monticello Theatre Association, Jon Faw is Tom. Faw plays the character with a light touch, keeping Tom contemplative and introspective, without descending into melancholy. Tom is withdrawn and downtrodden, but he has spirit in him still and hasn’t given up hope of something better.

In Tennessee Williams’ plays, hope can be a dangerous thing. Characters tend to place too much hope on unlikely outcomes. They demand too much from each other in their desperate desire to fulfill some yearning, some need. All of the characters in this play hope for things from each other that they can’t have. Tom’s mother, Amanda (played by Carrie Brocksmith), yearns for a past in which she was the young, charming debutante. She tries to relive the era of her many “gentlemen callers” through her daughter, Laura (played by Chelsea Mueller). But Laura is painfully shy, with a small physical handicap that renders her even more steadfast in her desire not to be noticed. She struggles to attend classes or even to answer the door. Yet she too yearns, for harmony within her family – Tom’s relationship with Amanda is contentious, and that contention often bubbles over into arguments that end with Tom storming out of the house. Amanda wants him to take the role of the patriarch in her husband’s (permanent) absence. Tom is expected to support Amanda and Laura while also helping find a suitable future husband to take care of Laura. He resents the role, and ultimately ends up following in his father’s footsteps after a reluctant final attempt to meet his mother’s demands. He arranges for a friend from “the warehouse” (where he works a soul-crushing job) to come by for dinner one evening; that friend, Jim O’Connor, unknowingly finds himself the underpinning of the hopes of all three family members – it’s a burden too big for one man to bear, even if he did know what he was up against. Isiah Asplund plays Jim with an endearing charm; Jim is chatty, kind, and unassuming. He seems unable to stop himself from talking to fill the silence of Laura’s shyness, and he succeeds – at least for a little while – to draw her out of her shell. Meanwhile, he also seems to be one last gentleman caller for Amanda, who decks herself out in a dress from her debutante days (a lacy, frothy gown which has gone quite out of fashion). Amanda is as talkative as Laura is quiet, and she clearly revels in playing hostess for a charming young man once more, even if it’s for Laura that she’s trying to win Jim over.

The glass menagerie of the title refers to Laura’s collection of small glass animals which, in Tom’s memories of these events, are ever-present. They provide companionship for Laura; she turns to them for comfort, particularly when Tom and Amanda are arguing. Mueller plays Laura with a sincerity that makes her shy but not simple; fragile and painfully self-conscious but also sweet and caring and not without her own hopes and fears. The parallels between her and her delicate glass figurines are easy to draw, and it’s Laura’s presence that Tom still feels long after she and the menagerie are gone.

This production took a few scenes to settle into its pace; it started a bit rushed, and there were a few places where one character seemed to comment on the actions or behaviors of another almost before they started them. Later in the first act and throughout the second, though, the actors settled into a rhythm with one another that felt natural. Williams’ dialogue closes the gap between poetic and authentic, and each of the characters feels real and – dare I say it – relatable, even when they’re at their most destructive. Brocksmith’s Amanda is in some ways the most difficult; she’s almost manic when she gets herself worked up worrying about the future, yet she’s also stuck in the past, unable to let Tom and Laura’s father go despite the fact that he left more than a decade before. The present is the one place she can’t seem to get comfortable, and Brocksmith lets us see that.

There are one or two small choices in the production that don’t seem to fit. One scene, for example, washes the stage in red light during an argument between Tom and Amanda with a spot on Laura; it feels a little strange, since the rest of the play uses fairly natural/realistic lighting. There would certainly be room for more expressive or symbolic lighting or staging choices, since it is a series of memories, but it doesn’t feel necessary for the play to be effective.

Williams’ Glass Menagerie is a captivating story with multilayered characters, and each member of MTA’s cast inhabits his or her character with a grace that’s engaging to watch as it unfolds. This is a fairly intimate play which is served well by the close space of the small theater. That it is at least inspired by events in Williams’ own life only adds to its intrigue, though the story certainly stands on its own without that context. To quote director Dustin Yocum, the play is a “poem to escape, to illusion, to the bonds of family and responsibility.” It’s a beautiful poem, which reveals something more of itself every time it’s read.

The Glass Menagerie by Tennessee Williams, directed by Dustin Yocum, will be at the Phoenix Theater March 2nd and 3rd at 7:30 p.m. and March 4th at 2:30 p.m. Tickets are $12.50 and can be purchased here.