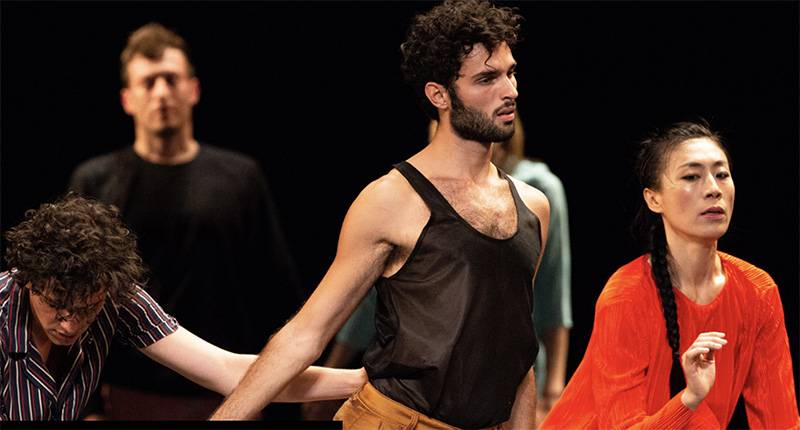 I’ve made no secret of how impressed I’ve been by Dance at Illinois’ performances this season. I’ve explored dance film and its additional narrative capacities, enjoyed bold student work, as well as re-conceived classics and powerful new work by faculty. Each experience has challenged previously held notions about what contemporary dance is, and what it isn’t; blurring the boundaries between performance art and dance, creating conversations about the significant and often painful challenges facing us today. This brings us to Tere O’Connor Dance: Long Run, which will make it’s long-awaited Krannert Center for the Performing Arts premiere this Thursday.

The buzz on Long Run has been big and for good reason. It is an extremely significant and timely work from a choreographer whose impressive rèsumè also happens to include Center for Advanced Studies Professor of Dance at the University of Illinois at Urbana-Champaign and artistic director of the Tere O’Connor Dance.

He has created over 45 works for his company and toured them throughout the United States, Europe, South America, and Canada. He has created numerous commissioned works for other dance companies, including the Lyon Opera Ballet and the White Oak Dance Project, and solo works for Mikhail Baryshnikov and Jean Butler. In 2014, he was inducted into the American Academy of Arts and Sciences. O’Connor received a 2013 Doris Duke Performing Artist Award, is a 2009 United States Artist Rockefeller Fellow, and is a 1993 Guggenheim Fellow and has received numerous other grants and awards. His work has been supported by the National Endowment for the Arts, the New England Foundation for the Arts/National Dance Project, The MAP Fund, and many other organizations. He has received three New York Dance and Performance (“Bessie”) Awards. An articulate and provocative educator, O’Connor has taught at festivals and universities around the globe for 25 years. He is in residence at the university for the spring semester each year and in New York or on tour for the remainder of the year. He is an active participant in the New York dance community, mentoring young artists, teaching, writing, and volunteering in various capacities. His most recent work, BLEED, premiered at Brooklyn Academy of Music’s Next Wave Festival in December 2013 and toured throughout the United States through spring 2015. O’Connor will premiere a new work for 12 dancers at the Kitchen in New York City in December 2015.

During these cold dark days of early winter, the presence of someone like O’Connor in our midst burns bright. O’Connor, who splits his time between CU and New York, is an important creative conduit, a through line between the pulse of the New York dance world, and the performing arts laboratory that Dance at Illinois and Krannert Center for the Performing Arts provide.

His contributions to the dance world are rivaled only by those to his students and dancers.

“I think of Tere O’Connor as the poet laureate of dance.  He has been a passionate advocate for the syntax, rhythms and structural elements of dance to speak on their own terms, separate from the logic of theater, narratives or musical forms.  The intensely beautiful kinetic images in his rigorously constructed dances provide the viewer with a moment to reflect on life’s mysteries.” —Jan Erkert, Head of the Department of Dance

Tere O’Connor’s choreography finds its logic outclasses the realm of “translation,” operating in a sub-linguistic area of expression. He views dance as a system with its own properties; an abstract documentary form that doesn’t search to depict. The lenses of western culture, spoken language or dance history, often used to “interpret” dance, are subsumed into layers of the work and decentralized. In addition to a great love of movement and a deep commitment to choreographic craft and design, more philosophical urges animate the work. From his earliest efforts, the complex entanglement of passing time, metaphor, constant change, tangential thought, and memory have ignited an exploration into the nature of consciousness for O’Connor. Choreography is a process of observation which includes multiple, disparate elements that float in and out of synchronicity. Engaging in dance as a life style constitutes a move away from the narrow social constructs we’ve created to standardize human behavior.

Martha Sherman’s 2017 review of Long Run for Dancelog.nyc review suggested that it may be O’Connor’s best work yet. “Rich and spare at the same time….The cascade of dance never lost its connection, but pushed and pulled so that each trio, duet, and solo had its unique form and character, and the whole, yes, was genuinely greater than the sum of its parts.”

Finally, we turn to O’Connor himself, who both choreographed and composed Long Run, in his own words.

I have been making dances for 38 years, and I long ago ceded any desire for the expression of specific ideas in my work, since a blend of inference, essence, quality, reference, and affect seem to bring us to the edge of meaning in dance. I allowed myself to lean into the ambiguous contours and endless associative pathways of the choreographic mind to shape my work. The result has been works whose structures are disobedient and play with time in fragmentary ways. Dance can enliven our experience of time passing. Many forms do this, like novels and film, yet at the most fundamental level, these forms search for a shared understanding for their viewers. Some look for this result in dance as well, but my journey led me down a different pathway. I became interested in the ways that events float outside of narrative sequencing, left to churn in an inexact cloud of memories and present desires. In Long Run, I tried to incorporate the haplessness of sequencing in our lives to create a structure of accidental contrasts. A narrative seems to appear, but it is one etched out of chance and could begin or end at any moment. I created the musical score for this work to further shape its structure of difference and attempt to reign in the inherent unruliness of this type of creative procedure.

Tere O’Connor Dance: Long Run promises the best of what Dance at Illinois and KCPA offer: an evening of awe, inspiration, boundary-pushing innovations in the performing arts, and thought-provoking engagement with our world,

Learn more about Tere O’Connor Dance on their website

Long Run is co-commissioned by Live Arts Bard at the Richard B. Fisher Center for the Performing Arts at Bard College through a Choreographic Fellowship with lead support from The Andrew W. Mellon Foundation, and NYU Skirball. This presentation of Long Run is made possible by The New England Foundation for the Arts’ National Dance Project, with lead funding from the Doris Duke Charitable Foundation, The Andrew W. Mellon Foundation, and The Cultural Development Fund. Additional funding is provided by the New York State Council on the Arts, The National Endowment for the Arts’ Art Works Grant, New York City Department of Cultural Affairs, the Marta Heflin Foundation, the Harkness Foundation, and the research fund from University of Illinois Urbana Champaign. The development of Long Run was made possible in part by the National Center for Choreography at The University of Akron.