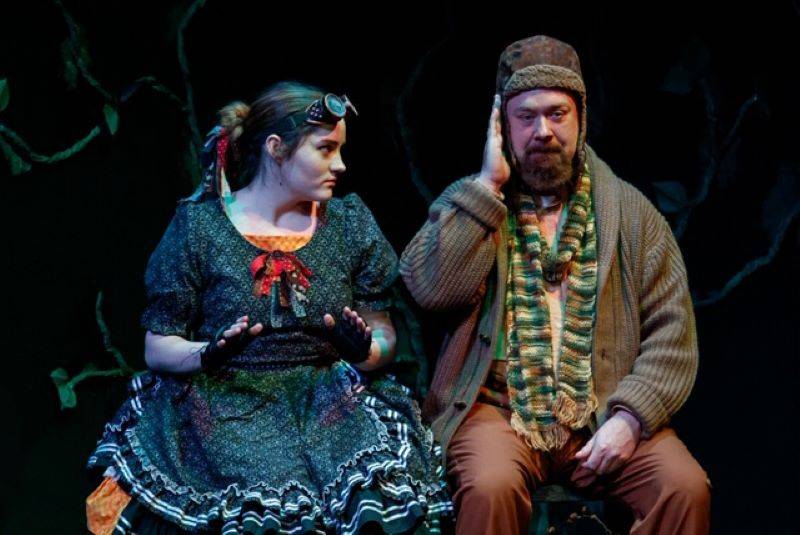 Do you know what you get when you combine an all-star cast, remarkable costume design, and perfectly executed dark humor?

The Celebration Company at Station Theatre’s current production of Jen Silverman’s The Moors, that’s what.

Directed by Mathew Green and starring Joi Hoffsommer, Kimmy Schofield, Lindsey Gates-Markel, Mindy Smith, Emma Johnson, and Matt Hester, it as a heart-wrenching yet hilarious dark comedy that takes the audience through a gauntlet of emotions.

A period piece set in the 1840s on the bleak moors of England, The Moors at its core is a story about hopelessness, and the scramble to grasp onto hope once again.

We meet Agatha (Hoffsommer), her younger sister Huldey (Schofield), the maid Marjory (Gates-Markel), and their family dog The Mastiff (Hester) deeply entrenched in the hopelessness and sadness that comes from the isolation that is living on the English moors. They gather in the sitting room of the family manor awaiting the arrival of their new governess Emilie (Smith).  From the opening scene onward, hilarity and chaos ensues taking you a thrilling emotional roller coaster.

Haunting yet powerful as Agatha, Hoffsommer commands the stage with. Every minute detail of her performance was calculated with such incredible precision. One could consider her Agatha to be the villain of the story; a person that makes decisions without remorse and with purpose. But she’s not. She’s far from the villain. Truly the only villain in this story is the bleakness of a life void of hope. However, for Agatha she continues to hold onto the hope her family’s continued legacy; that that legacy would never fade. And for that hope to continue, as Agatha argues throughout the show, she must push against the box that society has built around women. She must become a master of herself, and all of her strengths as a woman. And Hoffsommer makes sure we feel Agatha’s purpose and pursuit of her goal with every line. Per usual, Hoffsommer does not disappoint. I’m becoming more and more convinced she is incapable of disappointing in any role.

Gates-Merkel was hilarious as the deadpan, mysterious maid Marjory. Or was it Mallory? No. It was Marjory….I think. Gates-Merkel demonstrates comedic brilliance and perfect comedic timing; stirring up excitement and laughter anytime she entered a scene.

After seeing Schofield in a string of dramatic roles, it was a delight watching her have blast on stage in a comedic role. She clearly relished the opportunity, and enjoyed every minute of her time as Huldey. Her faces and silent reactions to her scene partners alone made laugh hard. Add to that her interpretation of Huldey–a melodramatic, spotlight seeking adult child with a penchant for flamboyance and self-proclaimed fame–Schofield steals the scene anytime she is on stage.

In stark contrast to the quirky, funny family, especially Agatha, is Mindy Smith’s Emilie. Subtle, kind, and stoic, Smith’s Emilie stood on the opposite end of the spectrum from Agatha; almost representing the very “ladylike” box Agatha fought against. She performed with such poise and elegance that gave way to fantastic chemistry with Hoffsommer. Much like Hoffsommer, Smith consistently offers a fantastic performance regardless of the role she plays.

Then, during momentary breaks from the hilarious chaos, conniving, confusion, and dramatic diary readings, we are given a glimpse into the mind and philosophical musings of The Mastiff (Hester), and his interactions with A Moor-Hen (Emaline Johnson). Initially these interactions offered endearing and quirky moments, but they began to change. What seemed like moments to catch your breath after laughing became heart-wrenching moments that took your breath away. Not only did Johnson and Hester demand your attention through the smallest of details in their performance (Johnson would look around and throw her voice to look and sound like a hen), every line and emotion landed like a blow to the gut. You could not look away without missing every little important detail. This was not watching a performance. It was like looking into a mirror, and hearing your most desperate, dark, pain-filled emotions played back to you. Just breathtaking work by both of them.

To be completely frank, The Moors is, by a wide margin, one of my favorite shows of the last few years. It is a unique and, at times, weird show, but in the best way possible. I could tell from conversations after the show that there were a myriad different responses to the show (all positive), and that each person took something different away from the show. Regardless, it was evident that every audience member walked away moved and extremely pleased by what they saw.

It is the type of show that Champaign-Urbana needs; the same type of show the Celebration Company offered with Marisol, HIR, The Aliens, and even the recent adaption of It’s a Wonderful Life: a show that forces the audience to think outside the box about what theatre is or should be.

I, for one, will be thinking about this show for a long time to come.

Do not, and I repeat, DO NOT pass up an opportunity to see The Moors.

Top photo: Photo of brunette woman with Steampunk glasses on her head and green period dress seated next to man with beard and fleece winter hat with ear flaps, scarf, sweater and trousers. Photo by Jesse Folks.