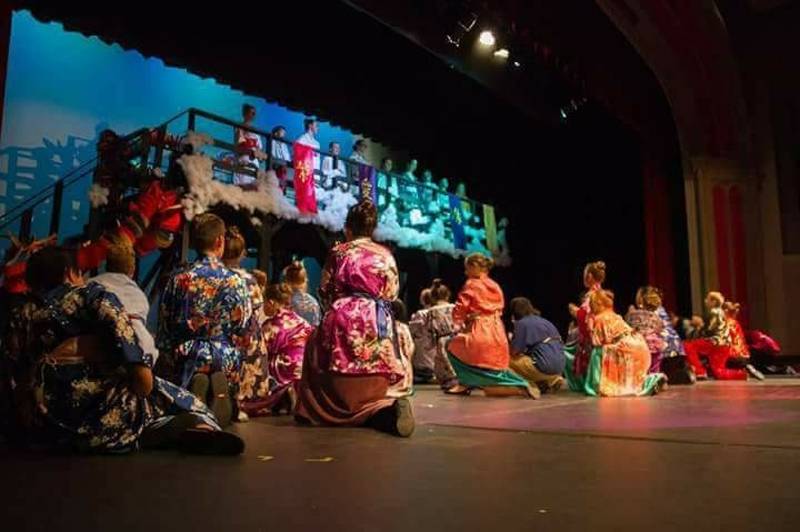 Niccole Powers is an artist of many mediums. Among her many talents are set building, drawing, shoe painting, and tattooing. In between working overtime, planning her friend’s wedding, and renovating her house, Niccole found time to talk to me about the way she uses her artistic drive in every facet of life. She not only builds sets for a children’s theatre company, but she is also raising two kids of her own — a teenager and a toddler. Her job at Developmental Services Center provides an artistic outlet, too, as well as enough variety to keep her on her busy toes.

Smile Politely: What inspires you? Do you try to find inspiration by creating a mood or environment, or do you let it come along? I’m sure it depends on whether you’re doing something with a deadline or not…

Niccole Powers: I take those as they come. Since a lot of what I do is project based, I tend to research and sketch things a lot in the beginning. I, on rare occasion, get inspired to just make some art, but 90% of what I’ve done lately is commissioned.

SP: What kind of challenges do you run into when you’re creating?

Powers: The biggest challenge for me has always been, and will most likely always be, time. I wish I had two of me most days. I like to stay busy and sometimes forget how busy that can be. Add a toddler and a teenager into the mix and life can be crazy. I know that it is super important for me to still fit creating into that, so it’s a constant juggle to find that balance.

SP: I know a little bit about that juggling act! Work, kid, hobbies, friendships, and family…whew! Do you work in Champaign? Are you a fulltime tattoo artist, or do you have other jobs?

Powers: I work for Develompental Services Center and have for 2 years as an instructor in the day program. I tattoo by appointment only these days.

SP: That’s a great organization! What do you do in the day program at DSC?

Powers: I work with developmentally disabled adults, teaching them life skills, doing art projects, volunteer groups, and recreational outings. No two days are the same, and I love it. It’s chaotic and busy, but I’ve never laughed or cried so hard, so often.

SP: That is incredible. So did you take art classes in school? Drawing…?

Powers: Nope, no art classes. I remember drawing and stuff from as young as I can remember though.

SP: So you’re self taught…

Powers: Yep, completely self taught. I have worked with and under a lot of great people who have taught me some amazing things, though.

SP: Being able to draw has always seemed like a super power to me. How do you do it? Is it like those tutorials where you combine a bunch of shapes and they make a penguin?

Powers: Ha! No, but I would have to say the majority of the skills I have are from watching other people. I am an observer.

SP: Do you sit with a note pad in the park, like a Parisian?

Powers: If by park, you mean during a Sunday overtime shift at one of the group homes, sure.

SP: We squeeze it in when we can, huh. Why tattoos? I imagine there’s some drawing involved…is it just that you wanted a new way to draw?

Powers: My art has always been ever evolving. I started out drawing as a kid, then painting, then moved to mixed media art with prop building and set designing. Working at The Krannert Center for two years helped me realize that being paid for my art would be ideal. Tattooing for me was a natural progression to a new art form. It also helps that tattooing is one of the highest paid art forms. It was certainly appealing to me after years and years of doing art just for the love of it (which generally meant free). Don’t get me wrong, I still make free art on the regular, but having that in my pocket when I need it is a fun and useful skill. I am only doing it as a side gig and…I am super selective about who I work on.

SP: I didn’t know tattooing was lucrative, but it makes sense. You have to be trusted and skilled…

Powers: As far as creating art goes, it’s the most lucrative, really. Though on the flip side, it carries a lot more weight then most art forms—you can literally kill someone if you aren’t safe. You are essentially doing a medical procedure.

SP: What are some precautions you need to take? How can you prevent or treat problems?

Powers: Well, you are essentially creating a tattoo sized wound. If your environment isn’t sanitary, there’s a lot of risk for infection or contracting something even worse like hepatitis, HIV…any type of blood borne pathogen. I use disposable needles and tubes so they are all sealed until I set up for a session. Every year, I retake a Red Cross bloodborne pathogens re-certification. Keeping your space sanitized is huge, too. I did my apprenticeship with a guy in Chicago who has been tattooing for around 20 years, and one of the things he was most insistant on was cleanliness and [preventing] cross contamination.

SP: Did you live in Chicago when you did your apprenticeship?

Powers: No, I lived here. I would drive up to Chicago to sit in with him every few weeks for about a year. My apprenticeship wasn’t a typical one. He was someone I had known for years (from when I did live there) so he didn’t charge me to apprentice with him, like most artists do. That was about 6 years ago.

SP: So is it like assisting the pro and then you work up to using the equipment yourself?

Powers: Basically, yes. I had actually started doing some stuff on myself, grapefruit, and trusting friends before I started working with him, so sitting with him was more about learning techniques and refining those. So I would go up, learn a bunch of stuff, then come home and “practice” by applying that to pieces I did. It wasn’t until he and I sat and tattooed a piece on my calf together that he said he felt comfortable with me working in a shop. A month later, I was working in my first shop in Decatur.

SP: How do you get people to let you “practice” on them? You show them your sketches and tell them about your training or…they’re just close enough to you that they trust you?

Powers: It started with people who are close to me but, then, once I did some good pieces, it sort of just expanded from there. Word of mouth is huge in this town.

Powers: If they’re smart, they do. I have a portfolio website that admittedly hasn’t been updated since before [my youngest was born] and a Facebook public page. A lot of us also have physical photo albums that sit on the counter in a shop.

SP: You’re not working exclusively as a tattoo artist right now, so what’s the rush?

Powers: That’s how I feel, too, though my portfolio site covers a cross section of the art I do. It’s set stuff, prop stuff, craft projects, tattooing, interior design projects. Having a rambunctious toddler makes everything seem harder.

SP: Yes, I know! What other creative pursuits are you working on?

Powers: I just finished designing and building the set for Penguin Project, but most of my creative energy these days has been going towards work related projects. I feel really fortunate to have a job that allows me a lot of creative freedom.

SP: That really is a great perk. What is Penguin Project? How’d you get involved?

Powers: Penguin Project is a national project but they have regional chapters. It is theatre for disabled kids. This year there were approximately 80-100 kids involved and they performed Mulan Jr. I got involved because I have experience working with [people with] disabilities and designing sets, so it was kind of a perfect fit.

SP: How do you design a set? Is it like building a house? I know next to nothing about either.

Powers: I first have to read the script. I have to feel a connection with it. Any show I’ve designed, I immediately saw things in my head as I read along. I’ll usually go back through a second (or more) time and make notes about those things. Then everything from there is puzzle pieces: The space I’m working in, director requests, acting needs, etc. I am not a typical designer in that I don’t usually have it all laid out in the beginning, and it takes a lot to get it all out of my head, but, somehow, so far, it’s come together. I’ve never had formal training other than with props, so I don’t follow the rules a lot of the time.

SP: What’s that saying about rules…? What are you working on now? Any personal side projects or plays?

Powers: Currently, I am working on personal and work stuff. Having an 18-month-old has slowed down my professional career, and I’m averaging designing 1-2 shows a year. But I am super fortunate that my full time day job allows me to have a lot of creative outlets.

SP: That is fortunate! Thanks for taking the time to talk. I know you don’t have a ton of it.

Our interests and talents go everywhere with us, if we keep looking for ways to incorporate them.