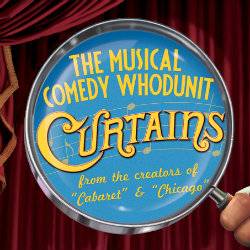 Danville Light Opera—more commonly known as DLO—began its work in community theatre in 1956. It has, in the more than 60 years since its inception, presented an annual slate of musical theatre to its patrons that runs the gamut from The Merry Widow and No, No, Nanette (two of its original offerings) to Sweeney Todd, Rent, and The Addams Family. To say that they’ve covered everything in-between is to put it lightly. Check out their website archive for an exhaustive and impressive list of past shows.

This season, following last fall’s The Little Mermaid and before this spring’s upcoming Sister Act, DLO will present the backstage musical whodunit Curtains, under the direction of Chelsea Collier Zych. Part murder-mystery, part valentine to Broadway itself, Curtains takes place in 1959 Boston and follows an investigation into the death of Jessica Cranshaw, the supremely untalented star of a musical titled Robbin’ Hood of the Old West. It is up to Lt. Frank Cioffi—a police detective who happens to adore musical theatre—to solve the case and, coincidentally, save the show.

Curtains started its original Broadway run in March of 2007 and ran until June of 2008, logging over 500 performances. The show, from an original book and concept by Peter Stone, has music and lyrics by the famed Kander & Ebb and additional book and lyrics by Rupert Holmes. It was, according to New York Times critic Ben Brantley, the show that made an already well-known David Hyde Pierce a bona fide Broadway star, calling Pierce’s Lieutenant Cioffi “the best damn musical theatre character since Mama Rose in Gypsy.”

In advance of Curtains’ DLO opening, I got to talk a little with director Chelsea Collier Zych about her own love of theatre, as well as what makes this show so special.

Smile Politely: I always like to start by asking how a show came to be on a director’s radar… Were you familiar with it before deciding to direct? Were you approached to direct, or did you submit this script?

Chelsea Collier Zych (pictured, left, in 2013’s Pride and Prejudice Parkland College): I’ve actually been nagging various theater companies to do the show for about four years. Back in 2008, I was an intern with Civic Theatre of Allentown in Pennsylvania. We were hanging stuff on the fly bars and I said in passing, “Wouldn’t it be cool to set a musical backstage? With all the scenery pieces from various shows going in and out, and characters like stage managers and stagehands that you usually don’t see on stage?” The tech director looked up and said, “You mean like Curtains?” That was the first I’d heard of it. Several years later, I was volunteering on DLO’s board and serving on the show selection committee. I remembered Curtains, requested a copy of the script, sat at my kitchen table cracking up reading it, and started lobbying to direct it.

SP: I’ve seen you on stage quite a lot in the last few years. How often do you direct, and what about it appeals to you?

Zych: I direct infrequently. I’ve directed one show for DLO previously (Promises, Promises in 2013), and a few plays and scene showcases. As I know you know, it’s a ridiculous amount of work, particularly logistics and planning, neither of which come easily to me. What I do like is the world-building aspect of directing, the aesthetic decisions a director gets to make. There’s something really fun for me about standing in front of an unfinished set and saying, “The saloon needs to be purple, different shades of purple, like a painted lady Victorian, and the lighting for the show-within-a-show should be distinct from the backstage scenes, so let’s go with bright, warm tones, and the costumes are 1880s Western, but through the lens of the 1950s, like Marty McFly’s shirt in Back to the Future III.” It’s like a paintbox with pop culture references. Where else but theater am I going to get the opportunity to create something like that? That being said, my favorite part of directing is working with the actors to create and refine their characters. The adventure of live theater is that it’s never the same twice, so I’m interested in seeing what the actors can bring to the story. I don’t want to see the OBC recording writ large on stage, I want to see my show, with my friends and co-workers and locals and theater newcomers. Watching them have fun and learn helpful tricks that they can carry with them—that’s the best payoff.

SP: I remember reading about Curtains when David Hyde Pierce was doing it on Broadway, and it certainly has a fun premise. Looking over DLO’s online archive of past productions, it would seem that they make fun a priority. Is that something you also prioritize? I guess this is a roundabout way of asking, How do you choose shows on which to work?

Zych: I think that’s true, most of the time anyway. DLO has been around for about 60 years, and it’s always been run almost entirely by volunteers, so there’s an emphasis on making sure people have a good time. If a hobby isn’t fun, why do it? Personally, I’d say that I absolutely prioritize fun, not just the material but the experience. As a director, there’s a great opportunity to facilitate a process that makes people want to continue doing theater. I’ve been in shows that were super disorganized, or had a negative, even angry energy, and though they didn’t put me off theater entirely, they did put me off working with certain companies or directors. I don’t understand that way of doing things. It’s so energizing and joyful to see cast members building each other up, to encourage them. And, let’s be real, if you’re enjoying the show, you’re more likely to care about it, and to put in the work it takes to make it good.

How do I choose shows to work on… I like shows that make me laugh. Endearing characters that I care about. Interesting roles for women. Music that sticks with me. Jason Robert Brown really delivers on poignancy. Neil Simon (seriously, anything by Neil Simon). Likewise, Sondheim. I love a good dream sequence (that’s not too much to ask, right?). It’s hard to quantify; there are just shows that speak to me. I also consider the venue and the company. DLO isn’t the most convenient drive from Savoy, but the people are so nice, and dedicated, and they make it worthwhile. I have a short list of shows, companies, and personnel I would love to work with; and, if the opportunity arises and the timing is good, I’m in.

SP: I’m planning to attend Curtains, and it will be my first Danville Light Opera show. I’ve heard about them over the years, but I’ll admit I don’t know much beyond what’s on the website. Anything you can tell me about what makes DLO special?

Zych: Well, I’m honored that Curtains will be your first DLO experience. What strikes me about DLO is the community aspect of it. That sounds trite – after all, it is a community theater – but what I’m getting at is the opportunity for involvement at all levels. DLO takes chances on first-time directors. They train people on lighting, sound, set building. They’ve put on children’s shows and teen shows in the summer for a number of years now, to the extent that I’ve literally watched actors go from their first onstage role to playing leads in the adult shows. I think every show I’ve worked on (I’ve been onstage for several productions, and helped backstage), there’s been a nice mix of familiar faces and new ones. In Curtains, I have one cast member in her very first show, another who hasn’t been on stage in nearly 20 years, several experienced actors who’ve never done theater in Danville, and a handful of actors who have been involved in DLO productions for years. DLO makes them all feel welcome and valued. Theater groups sometimes fall into the trap of playing favorites, casting the same people over and over, making it hard to break in. That’s not the case with DLO.

SP: And now we come to the show itself. I know that Curtains has a show-within-a-show plot, and that it’s a “whodunit” murder mystery. What else should the prospective ticket-buyer know?

Zych: Curtains is a damn clever musical. As an avid mystery reader, I’m still delighted at how the murders play out on stage. There are clues aplenty, but the answer took me by surprise. It’s just delightfully well-crafted. I’ve described it as a Golden Age musical like Guys and Dolls crossed with a game of Clue. Add to that witty, fast-paced dialogue like a Hepburn-Tracy picture, and a gorgeous score from Kander and Ebb (the Tony-award winning team behind Cabaret and Chicago). Then throw in a little gentle mockery of Oklahoma, and musical theater in general, and you’ve got a show that’s barely a decade old, but feels so classic. It’s funny, and romantic, and a great glimpse behind the scenes to all the work and creativity and love that goes into creating a performance.

SP: I know there are times, especially when you’re getting close to opening a show, when you feel like you’ve seen the show a hundred times. Is there a moment that always—every time—makes you smile?

Zych: One? Just one? Look, I have incredible people working with great material, so there are a lot of moments that just get me every time. The opening sequence features every theater person’s nightmare, a lead actor with absolutely no idea what’s happening. You have to be really good to play someone so bad, and Suzy Goben delivers with her impeccable comedic skills. The musical number “He Did It” has brilliant choreography and jump scare reactions that crack me up, particularly those executed by David French and Rickey Williams, Jr. The recurring theme of Lt. Cioffi’s near-instant infatuation with ingenue Niki Harris (portrayed by Jacob Smith and Aubrey Falconio, respectively), as well as other characters’ reactions to it. The heartbreaking ballad “I Miss the Music.” In rehearsals, Bryan Goode starts to sing and the entire room stops to listen. The entirety of “In The Same Boat” — a number we see in multiple iterations — but there’s something so delightfully absurd about the line “Bring on the riverboat!” There are puns, sight gags, running jokes, sarcasm. I did pick this show primarily for its humor. But this is just my personal list. My hope is that every person in the audience for Curtains finds something that charms and delights them. That’s why we’re here.

DLO’s production of Curtains, with musical direction by David Zych and choreography by Elliot Emadian, will have just three performances: Friday and Saturday, February 16-17, at 7:30 p.m., and Sunday, February 18th, at 2p.m. You can reserve tickets now through the DLO website. All performances will take place in the Dick Van Dyke auditorium at Danville High School.