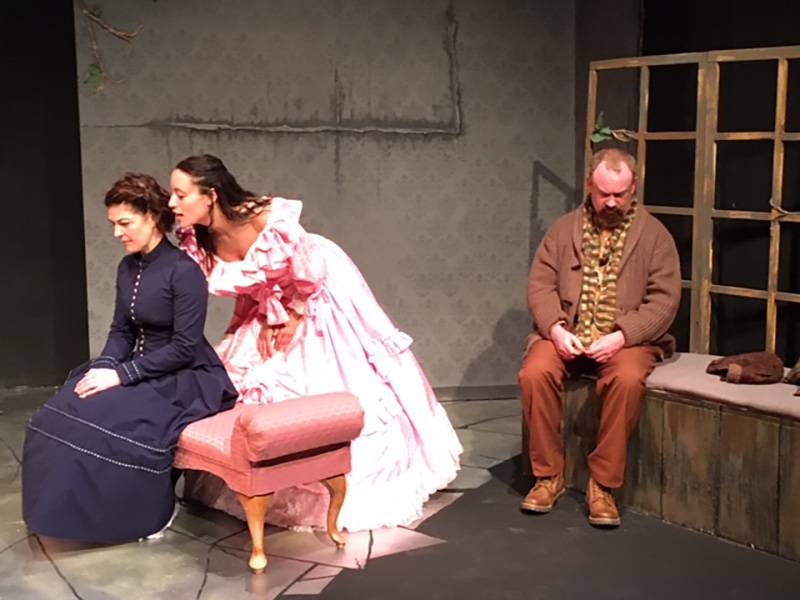 The Moors will kick off the Station Theatre’s latter half of their eight-show season and the Station’s inaugural show of the 2020s.

The Moors is a dark comedy blends time and place and transports you to the English countryside, where a Brontë-inspired tale unfolds. The Moors refers to the North York Moors, a meadowed land expanse located in the northeast region of England, rather than the Muslim inhabitants of Spain during the middle ages. I must admit I was surprised to learn what the story entailed based on the title, but that may be because I am not as familiar with this particular geographical term.

As described in the New York Times review of the original Broadway production, playwright Jen Silverman is “a favorite on the academic and experimental theater circuits” and a “rising playwright with a restless and fertile mind.” Director Mathew Green brings Silverman’s 2017 tale to life with a seasoned cast of local actors.

Smile Politely: Can you give our readers a brief synopsis of the show?

Mathew Green: I will do my best. But one of the difficulties my cast and producer and I have been having is that this show is genuinely hard to market because no summary of the plot can do justice to how funny and deeply weird it is.

I will say that this show borrows a lot of plot points and ideas from novels like Jane Eyre and Wuthering Heights, twisting them and modernizing them along the way. There are two sisters living in an ancient house on the edge of a desolate wilderness with their sad old dog. They have a mysterious housemaid who lurks about. A governess arrives under suspicious circumstances. A bird crash-lands in the woods. Then all hell breaks loose, for everyone. Hilarity ensues – dark, strange hilarity.

SP: Coming off a much lighter piece — Parkland’s Peter and the Starcatcher — what drew you to The Moors, which has been described as an absurdist, dark comedy?

Green: The Moors has been on my shortlist for a while, actually. I first read it a couple of years ago, and I was fascinated by how it goes in such unexpected directions.  Before I had even finished reading it, I heard that magic click in my brain that told me I wanted to direct it. As for shifting gears after Starcatcher… That’s the great thing about theatre. If you’re going to pursue a creative life, I think it’s important to pursue variety. I was in a similar situation this time last year, when I was following The Musical Comedy Murders of 1940 with The Women of Lockerbie. As was the case then, they might be in different genres, but a good story is a good story.

SP: Matt Hester tackles the role of The Mastiff, and Emaline Johnson is A Moor-Hen. What has it been like to prepare these actors to play animals? Are they more human-like, or more on the primal side?

Green: I’m glad you brought them up, because I love the relationship between these characters. I think the playwright uses them brilliantly to tell us about human nature and animal nature and how they intersect. For the portrayals, we have kept things mostly on the human side, because I felt that was the playwright’s intention. That being said, I know that both Matt and Emaline have done their homework and have incorporated nuances from the types of animals they are portraying.

SP: Tell me a bit more about your cast, designers, and rehearsal process.

Green: Niccole Powers is our scenic designer, Nick Shaw is designing lights, and our costumes are by Susan Curtis. I’ve worked with all of them before, and I’m so fortunate that they keep saying yes. All of them are amazing collaborators, and they always think of the Station’s space in terms of possibility rather than limitation.

As for our cast: Joi Hoffsommer and Kimmy Schofield play sisters Agatha and Huldey. Lindsey Gates-Markel plays their maid, and Mindy Smith is Emilie Vandergaard, the “hapless governess.” And, as previously mentioned, Matt Hester and Emaline Johnson play our Mastiff and Moor-hen. I’ve worked with all of them before, and they continue to surprise and delight me. I couldn’t be happier with the job they’ve done.

The rehearsal process was piecemeal, which isn’t unusual. In this case, we had a two-week break in the middle of things because of the holidays. But I have to credit my cast for coming back from that hiatus with a full head of steam. These last couple of weeks leading up to opening night have been tremendously fun and productive.

SP: Producing work after work around town, notably several at the Station Theatre, how has this experience differed from the past many?

Green: That’s a great question, and one for which I fear I don’t have the most exciting answer. It’s hard to compare the experience of working on one play versus another, because each play is unique and just needs what it needs. I don’t know that my methods change very much from show to show, but I’m grateful that the potential for inspiration is always there. The rush of seeing actors spark off each other, the joy of having the next good idea. I do try to learn and grow each time, and I feel like I have with The Moors.

Green: More than anything, I’m excited for people to see a new play. Something they don’t know already and can be surprised by. That’s one of the best parts of working at the Station, and I hope people will come out and take a chance on this show.

Top photo: Three actors on stage. On the left, a brunette woman in a long blue shirtwaist dress is seated on a pink chaise longue with a second brunette woman in a long pink satin ruffled dress leaning over here. To the far right, seated on a window seat, is a balding man dressed in a cardigan, scarf and brown trousers, looking down at his hands. Photo by Mathew Green