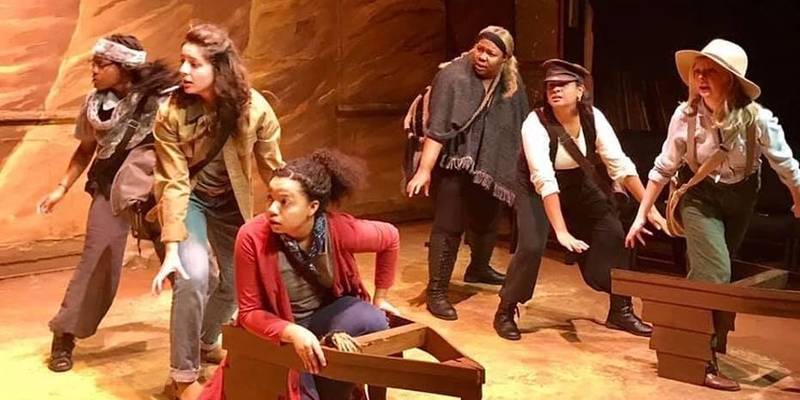 I am the first to admit that I am both a history geek, and a sucker for an epic adventure story. Especially if I can consume both at the same time.

But even as a student of History, I am constantly reminded that truly understanding history extends beyond a certain obsession with thick biographies or Ken Burns documentaries.

At the end of her note, tucked within the program, director Latrelle Bright writes the following:

“Tonight, we center the white man’s story and de-center his presence. “It might be off putting for some of you white men. Off putting to not see yourself […]But, I promise you this — you can, if you are open to it, see the universality of human experience, even if you are specifically are not there.”

The past is much more than the story told by the privileged from atop their pedestal.

As we travel along the Colorado River with a ragtag group of explorers; laughing, crying, and losing our breath along the rapids and through the twists and turns, the Station Theatre’s production of Men On Boats reminds us that history belongs to more than just those privileged enough to tell the prevalent story.

From the onset of the show we are greeted by a ragtag group of explorers comprised of all of the best tropes from adventure stories: the stubborn yet eternally optimistic leader John Wesley Powell (Dominique Allen), the realistic, tells it as they see it second in command William Dunn (Martha Mills), the adrenaline junkie best friends Hall and Hawkins (Sarina Donohue and Monica Hoh), the smart and logical John Colton Sumner (Krystal Moya), the troubled brothers with a mysterious past O.G. and Seneca Howland (Kahlilah Lane and Janhavi Kolhe), the stoic experience older brother of the group’s leader Old Shady (Misty Martin), the young wide-eyed kid Bradley (Courtney Malcolm), and the always amusing British adventurer looking for thrills in America Frank Goodman (Jenny Gleason).

While filled with humor, seriousness, and edge of your seat moments, the story is a simple one. We find the group in the midst of the government sanctioned 1869 expedition of the Grand Canyon, and follows them as they face the twist and turns, both literally and figuratively, of the Colorado River. To be frank, the script in of itself is not one of my favorites.

The set, as well, is simple. The stage painted the color of the canyon soil, and the walls a backdrop of the hills and cliffs throughout the canyon. Simple and very few set pieces do not distract but still transport you to the canyons. Add an original score by Brian Hagy to this, and you are easily pulled into the adventure.

All of this simplicity, however, allows for the beauty of the show to shine. The cast, and the unique voice they add to the story, is remarkable. This isn’t to say that there weren’t issues as the show began — it was opening night after all — but once they gained their footing they soared.

Where the script itself lacked in character development, Bright’s direction and this cast picked up the slack and gave life to characters that fell a bit flat to me. As a whole, the chemistry between the nine women was clear. The familial connection between the cast seemed to spill over into the show making the camaraderie of the group that much more believable. The cast played off each other naturally, and at many points I forgot I was watching a group of actors. Just as remarkable as the group performance were the standout individual performances from Dominique Allen, Misty Martin, Martha Mill, Courtney Malcolm, and Kahlilah Lane.

Dominique Allen, a rising force to be reckoned with in the C-U theatre community, gave an honest and heartfelt performance as John Wesley Powell. Although Powell’s optimism quite literally almost lead the group to their doom, Allen captured the wonder and hope of an adventurer conquering the unknown while wrestling with their own failings.

Misty Martin’s Old Shady and Martha Mill’s William Dunn countered Allen’s Powell with stoic and logical natures respectively. Both Martin and Mills offered a wonderful balance to Allen’s eternal optimism. Although Martin’s performance shined in more comedic moments, her centered and stoic Old Shady calmed the emotional waves both the group and audience encountered. Mills offered an intriguing and relatable dissidence to Allen’s optimism. I hope to see more of the two on any stage in the community.

By far the stand out performances for me came from Courtney Malcom as the wide-eyed, wet behind the ears Bradley, and Kahlilah Lane as O.G. Howland. When it was their time to shine, neither shied away from the limelight. Both were endearing, engaging, and a joy to watch.

If there is one critique to offer is the manner in which certain moments or emotions got lost in the performance. Much like the explorers, when distracted it can be easy for an actor to be caught up in the rapids. Lines were hard to follow at times. Certain cast members seemed to fall into the background and slink away. However, they were few and far between.

This is not to say the rest of the cast should be ignored. Bright clearly chose each individual for a reason, and without any of them the story would not be told as effectively.

In the end, Bright’s choice to insert voices historically suppressed and ignored — voices that MUST be heard — into this story is incredibly important.

We enjoy pretending that human experience is the same across the board. That it is identical no matter who you are, and is the one common bond we share. Unfortunately, that is not true and has never been, especially when human experience is only and perpetually viewed through white lenses. Women are and have been dismissed while their assailants are given positions of power. Persons of color are and have been murdered, demonized, and locked away while their assailants get off scot free. And this is continuously ignored as one perspective dominates the story. But don’t listen to men. White men’s voices have been far too loud and prevalent.